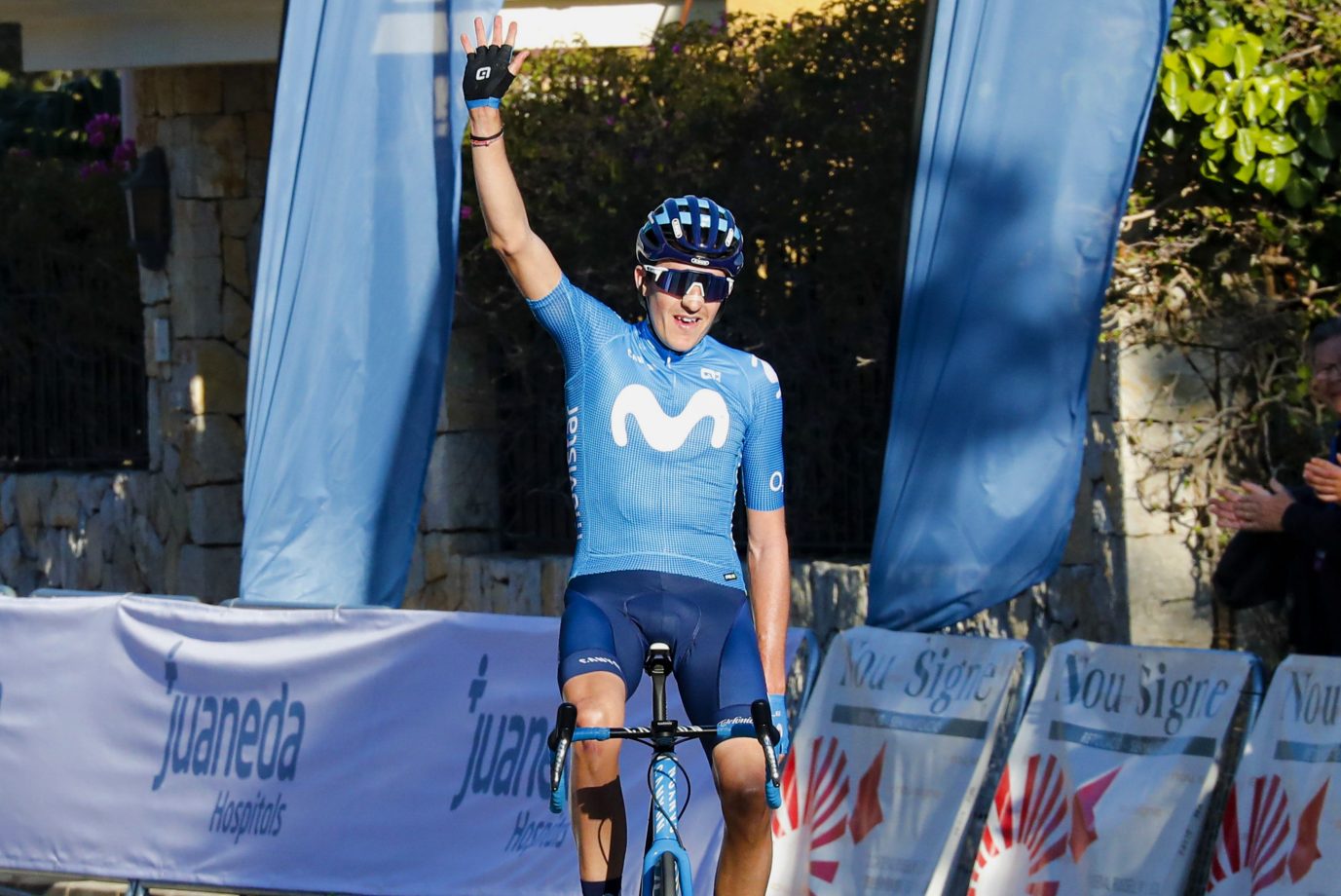 A sound display, yet another one in the lasf few years, of top class rewarded Marc Soler (Movistar Team) on Saturday with the second win of his career and the Blues’ maiden victory in 2020 at the Trofeo Pollença – Port d’Andratx (168km), crowning a long breakaway – one of his signature moves – with a solo victory in his first multi-day competition of the year.

More than three years after his first pro success at the 2016 Route du Sud, Soler rose his arms victorious again after creating, at the slopes of the Coll d’en Bleda (Cat-2), more than 70km away from the finish, a breakaway of nearly twenty riders which he initiated with a move alongside Lennard Kämna (BOH). The group, which saw its advantage shrink and expand, rising to three minutes and later dropping to 50″ as Kometa and Burgos drove the pursuit, ended up taking the better from the bunch. A series of attacks by Bora with about 25km left saw Soler further away from the break with Gregor Mühlberger (BOH). Meanwhile, the Catalan’s team-mate Davide Villella, also part of the initial move, kept all counter attacks in check into a six-man pursuit.

At the Mon Port area, over the decisive, 2km climb with slopes up to 20%, Soler left Mühlberger behind with a sharp acceleration, and was able to celebrate while Villella claimed a fine podium finish (3rd) and Valverde led the main group home in 10th place. An excellent icing on top of a solid 2020 Challenge so far for the Movistar Team, the opening Spanish event of the season coming to its close on Sunday with the sprint at Palma’s Paseo Marítimo (159km).

“I’m so happy with this first victory of the year, both for the team and myself. It was such a hard day, a very chaotic race and one where we all struggled a lot, yet with a great ending for us. At the descent of the Puigmajor, where Buchmann left us behind yesterday, the peloton split and we were ahead with a gap. At the Bleda climb there were some attacks which helped form that twenty-rider group from which we went to chase the victory.

“It was a tough course, with lots of ups and downs, and so the breakaway got selected one rider at a time, rather than real splits. At some point, Mühlberger and I could open that gap ahead of the riders still resisting, and we soon found great cooperation. My team-mates and I came here to train near Andratx a couple of days ago, and so I knew the final climb more or less – I knew where I wanted to attack in case I had the legs to do so, and fortunately, I could finish it off.

“We’re happy to see things going this well in Mallorca, with Alejandro’s podium finish yesterday and my win plus Davide’s 3rd here today. Now it’s on to Valencia next week – we’ll be tackling a similar finish to today’s, though on a longer climb, in Bernia next Saturday. Let’s see if we can do well also there.”