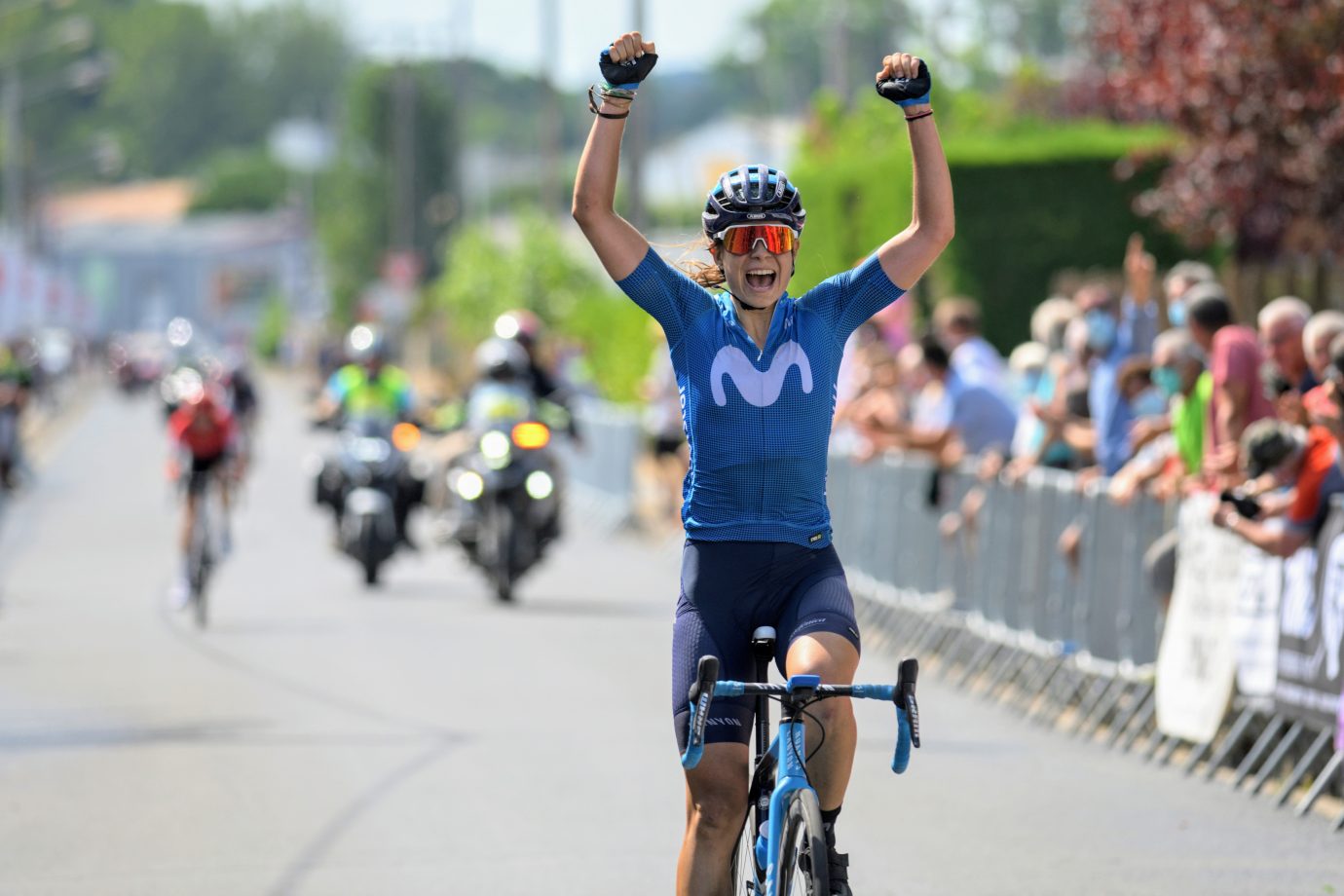 Three weeks after their first post-lockdown victory with Katrine Aalerud at the Norwegian time trial Championships, the women’s Movistar Team scored another success at La Périgord (UCI 1.2; Cornille – Périgueux, 100 km), the first international race back on French soil, with a brilliant performance from Sheyla Gutiérrez.

The ‘Lioness from Logroño’ capped off a performance full of strength and intelligence by the whole Telefónica-backed squad. Gloria Rodríguez, Jelena Eric, Barbara Guarischi, Aude Biannic and Alba Teruel kept under control each and every single move early on, keeping all breaks within sight before Gutiérrez launched the decisive move.

Sheyla jumped with less than 20km to go into an eight-woman escape with all big teams represented, Eugénie Duval (FDJ) and Tania Erath (CSR) as main threats from WorldTour outfits. At the final lap of the circuit around the Côte de Bauchaux (1.7km @ 5.5%; 4 ascents), Gutiérrez left behind the opposition to raise her arms victorious, ahead of Levenez (ARK, 2nd) and Erath (3rd).

Today’s win marks Gutiérrez’s ninth UCI success and her second triumph in Movistar Team colours, after conquering, 14 months ago, the Spanish ITT Championships in Yecla, Murcia, a title she hopes to retain at next Friday’s race in Jaén. After that, the Spaniard and all of her team-mates will go for the biggest goals of the season, in the months of September and October, which the Sebastián Unzué / Jorge Sanz-squad will tackle with this morale boost.

“At the final circuit I expected the race would split, and I knew it could go well for me. I had raced for the first time since lockdown at the Pamplona classic, three weeks ago, and saw myself doing really, really well – I knew I’d have that chance, but having just gone down from altitude training yesterday, we have those doubts into your mind, and my legs felt a bit weird because of that contrast. But seeing how well my team-mates were doing, always following the moves, avoiding any splits, keeping a steady pace, trusting my chances – I felt I could do it.

“As soon as the final selection was made, I knew I could go for the win, and tried it from the foot of the last climb. I didn’t want to go to a sprint at the end, I tried to go solo and it ended up being a really beautiful victory. Many big squads were missing, but it gives you morale to see that the feeling that you had, something like this like bound to happen after my good start in Navarra, came true in the end. I had that ‘something’ inside that I was able to get out today.

“We’re now going to the Nationals with a lot of excitement, this victory will give us much confidence for the two races. We’re hoping and aiming for the Movistar brand to remain on the top step of the podium. After this long time out of racing, as difficult for us as for our entire community, we had some responsibility in mind to be able to give back soon something to those who continued to support us through those challenging times. Thanks to the confidence by all of my team-mates, I was able to make it happen, and so this victory goes to the entire Movistar Team and the Telefónica brand, for the support they offered us in the last few months.”