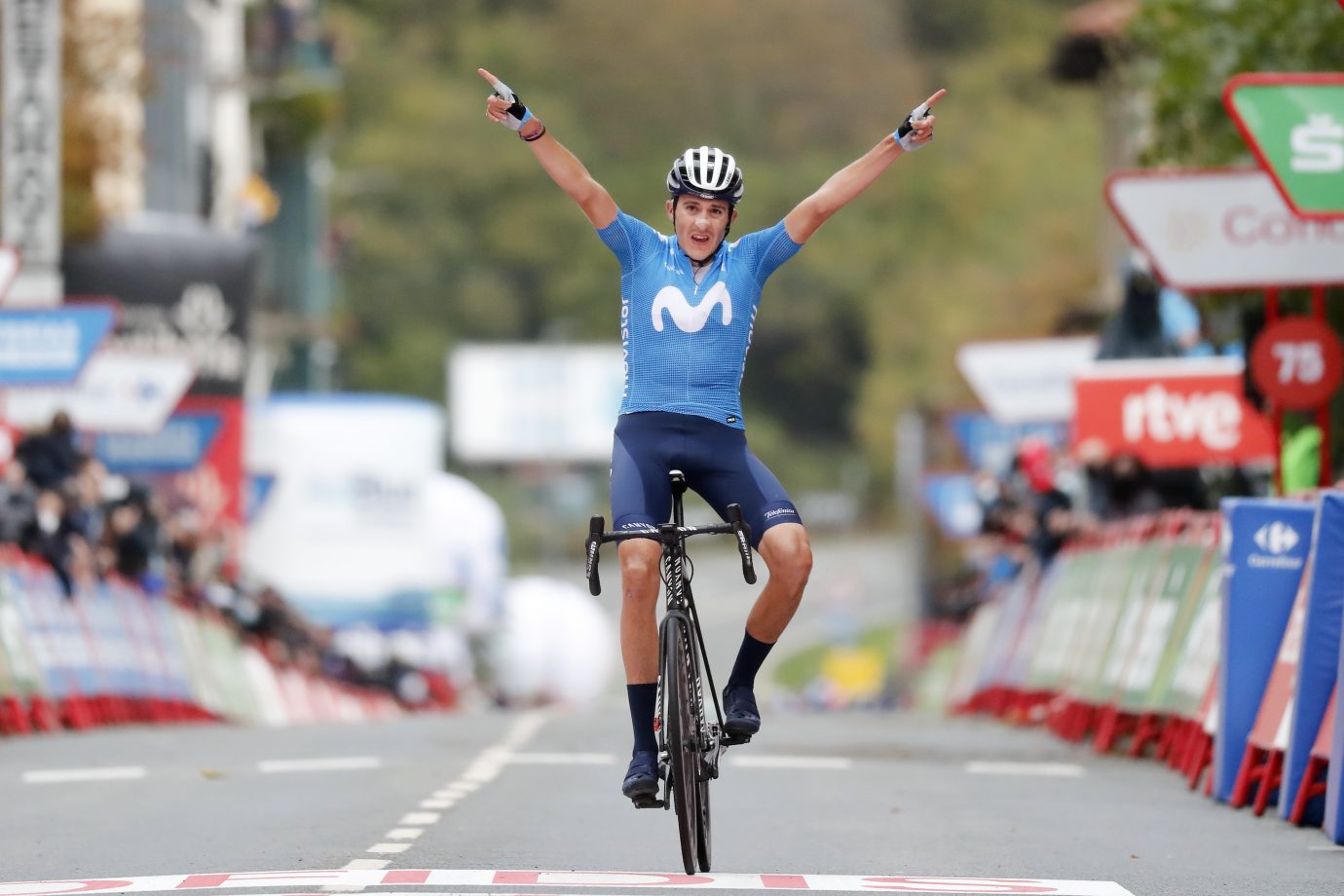 It was a day the Movistar Team really hoped to enjoy on home roads. Stage two of La Vuelta would be covered entirely in Navarra, with the 151km route from Pamplona to Lekunberri featuring the climbs of Guirguillano (Cat-3), Urbasa (Cat-3) and the tough San Miguel de Aralar (Cat-1; 9.4km at 7.9%), on concrete roads, 16 kilometers before the end.

Wind, lots of wind. The gusts were again demanding for the riders (around 50kph), even if not as exaggerate as on Tuesday’s opener, yet quite significant (mostly a tailwind). Temperatures were lovely (23ºC in Pamplona; 17ºC at the top of San Miguel), with some chance of rain at the end of the stage.

Marc Soler: “I’m so happy with this victory. We were racing at home, we were so motivated to be riding in Navarra, next to the team’s headquarters, and together with our sports directors, we had already planned before the start we wanted to give it a try from the top of Urbasa. We started pulling there and everything simply went perfect from that moment on. Arcas, Imanol, Nelson and Rojillas always kept the pace high on the flat, then Carlos put on a really good performance from the bottom of the climb, and I tried to pick it up from that. I struggled a bit into the final meters of the climb because I had worked so hard, but as I saw that they were slowing down into the descent and I was coming back, I took advantage from the fact that I was maybe at 2x speed from them, I tried to pass them without anyone getting to my wheel – and I went on to the finish. We were so excited and willing to do well here – we actually did a recon of this very stage in the weekend, just before travelling to Irún. It’s my first ever victory in a Grand Tour and I’m so, so happy. This team already deserved some reward after so many efforts and such a difficult season. I can only thank the team for their support and everyone who has been by my side in these months.”

Enric Mas: “We knew it was going to get windy, but it wasn’t actually an attempt from us to create some echelons, rather than keeping the group strung out so we could reach the foot of San Miguel with good speed and in a good position. Arri (DS José Luis Arrieta), who is from this area, and Imanol, who knows these roads like the palm of his hand, had planned to push at that very moment, they really wanted to take advantage from their knowledge – and it turned out really well. We used those final slopes in Urbasa to push with Arcas, we also took advantage from the wind with several other team-mates and the whole team did an amazing job. In the end, we crowned it with Marc, who really deserves this win. When he overtook us, I thought it was a motorbike, because he was riding at triple speed from what we were doing. When I saw he took 50 meters in barely three seconds, I knew he couldn’t stop and he would take this. We’re so happy about him!”

Thursday will bring a new finish, never used by La Vuelta, in the Soria province: the climb to the Laguna Negra de Vinuesa (Cat-1), with 8.6km at 5.8% average. It will be the end of a stage three which will start from the south of Navarra, in Lodosa, at just over 300m above sea level, and finish at over 1,700m, after 166km with only one climb preceding the finish, the Alto de Oncala (Cat-3).