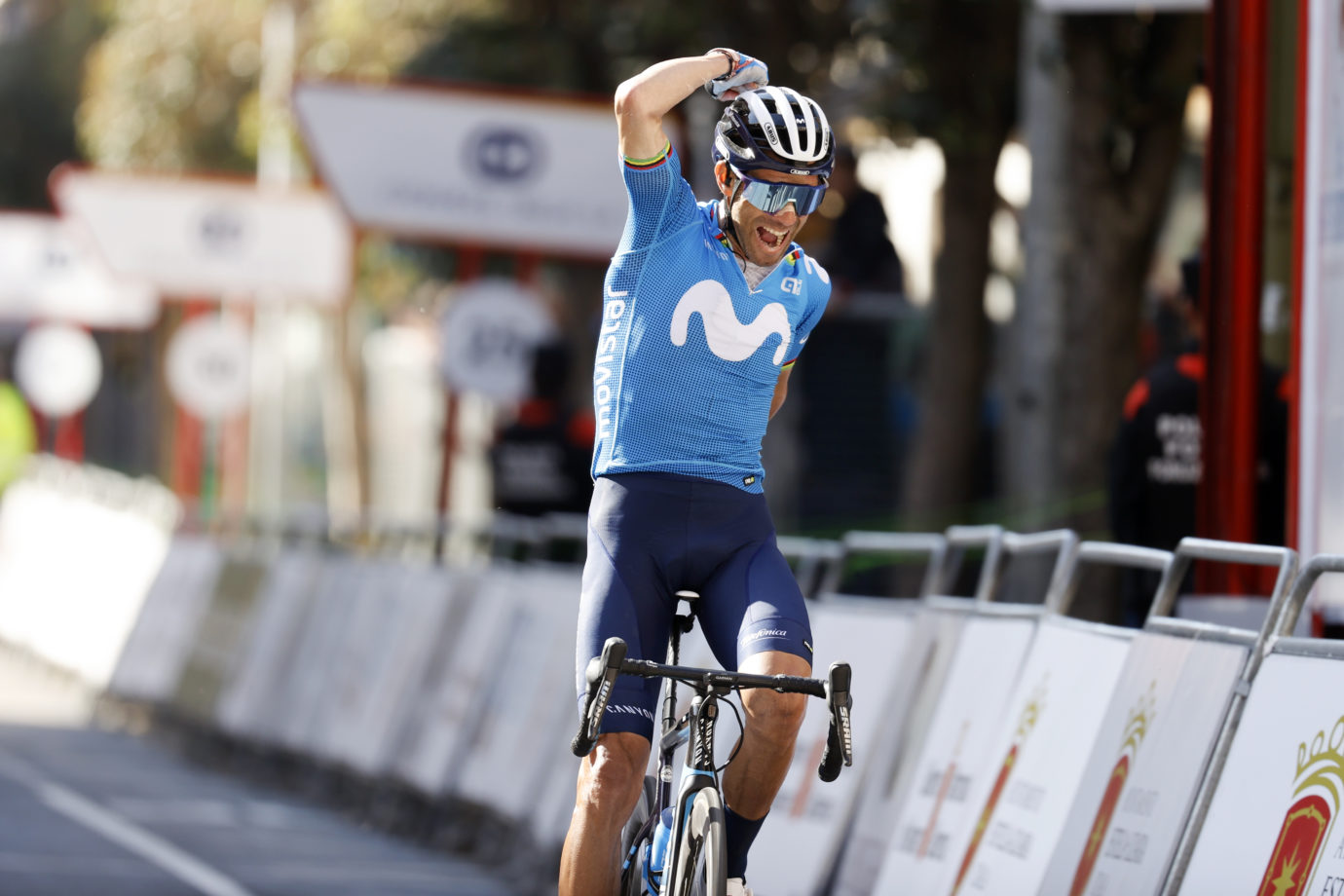 Alejandro shows his best legs in years to bring Movistar Team their second win this week and Bala’s third in Navarra, with a sensational series of attacks near the end of Blues’ home race.

The day he stops, he will do so with a level as extraordinary as the legacy he’ll leave. There’s very few doubts about that after Alejandro Valverde (Movistar Team) showed again at Saturday’s 2021 GP Miguel Indurain, the big Navarra race back after the pandemic hiatus, the legs of his best days. The ‘campeonísimo’ from Murcia reached the finish line at Estella’s Paseo Inmaculada solo, following a display of class in the last ten kilometers of the race by the name of the rider who, together with Alejandro, has left a bigger impression in the Eusebio Unzué-led squads.

The Telefónica-backed squad -affected by a crash from Enric Mas into the downhill of the second Ibarra climb, with several blows and bruises over his left-hand side yet no broken bones- took the reins of the field with about 80 kilometers to go. Carretero, Arcas, Samitier and Carlos Verona picked up the pace through the climbs of Guirguillano and Lezaun to select the favourites’ group, which a four-man move including Luis León Sánchez (APT) made suffer until the very end.

The work by Cofidis, BikeExchange and Bahrain alongside the Blues left Valverde at an attack’s reach, twenty seconds behind, at the steepest slopes of Eraul (-10 km). He ended up launching two: one to further reduce the field, then another one to go solo and chase Sánchez down.

Despite a late counter from Lutsenko (APT), Valverde kept himself composed and made the right moves -one at the non-categorized Alto de Muru, to drop the Kazakh rider; another at Ibarra, to leave the two Astanas behind- to secure his first victory in more than a year and a half (Mas de la Costa, 2019 La Vuelta); the second for the Movistar Team this week, after their other symbol’s, Annemiek van Vleuten, in Waregem; and Alejandro’s third in the GP Indurain, now up to 128 career victories.

“I want to thank everyone who supports me and all the people who cared about me and enjoys cycling. I’m super happy with this victory today. I want to thank the team, too, for their great job. We knew it was going to be a difficult day, with Astana being the strongest block today and doing a great job to keep the race under control from the beginning.

“At that final race situation with ‘Luisle’ and Lutsenko I was in a bit of fear – we’re talking about two super strong riders, which made it not easy to manage. When Lutsenko went so fast after Muru and took those meters I knew, though, that it wasn’t long until Ibarra, and I used my energy well to remain close and then, at the final part of the climb, give it my all with that final attack and open that gap.

“This victory gives me so much joy and confidence towards the Itzulia – hopefully we can have as good weather there as in Navarra. My legs are feeling well and we’ll be bringing a great them there. I want to dedicate this victory to our great friend, Gary Baños – wherever he is, he will have surely enjoyed that one. Things are starting to go well for us as a team, and that’s important to keep improving and leave more challenging times behind.”