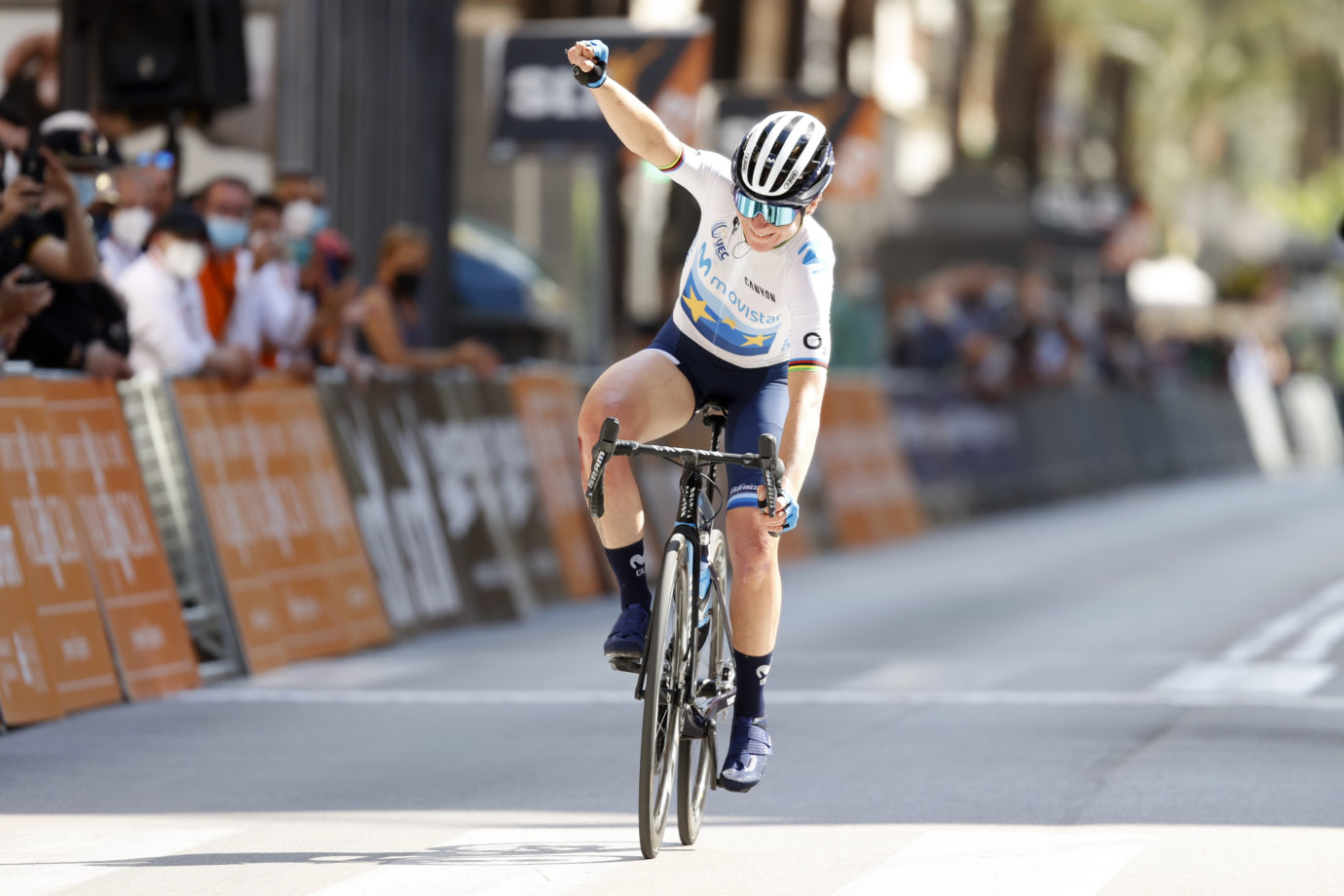 Despite crash into the final descent -before which she went solo-, European champion wins in Gandía with two-minute margin, leads Spanish race with three days to go.

A victory as sensational as selfless for a true symbol of the Blues’ values. Despite Annemiek van Vleuten‘s intention being helping out her team-mates to make the Movistar Team’s winning streak as collective as possible on day one of the 2021 Setmana Valenciana, the Dutchwoman ended up taking – not without a late scare – a magnificent solo win in Gandia to don the orange jersey as first overall.

The initial pulling duties from Gloria Rodríguez and Sheyla Gutiérrez and the moves from Alicia González, keeping the counter-attacks in check through to the decisive Alto de Barx (Cat-2), led to a first-class leadout: Paula Patiño accelerated hard and Van Vleuten further picked up the pace to seek for her team-mate Katrine Aalerud’s chances, so remarkable throughout the last month. However, that fast paced created new moves at the front, with Van Vleuten having to join Mavi García (ALE) and ultimately go solo, securing the win, just before the top.

Annemiek -who sustained a crash, with several bruises to her left side yet no bigger consequence, at the Barx descent- arrived with 2’06” over García and 2’21” on a first pursuit group led home by Aalerud, 3rd overall at a Setmana Valenciana where the Movistar Team has reached 10 victories in 2021, six of those by a women’s team which has gathered four in barely six days.

“We wanted to play it really open at this race, because I didn’t want to put myself on too much pressure. It was all about the team, not going with me to chase the leader’s jersey from day one – and it won’t be our priority to defend it. It’s more about putting on a great show and playing for stages with other girls. Obviously, the rest is not so close now, we’ve got some gap to play with and Katrine has also shown great form with that third place, so I think we can play that game with other team-mates.

“Paula Patiño set up a super good attack – she actually ended up setting my own attack, because I wanted to work for Katrine, and I picked the pace for that, but I was a little bit too fast and she didn’t tell me to slow down. We need to work a little bit on the communications side of things, since our plan was to set Katrine up for her to go. In the end, I went, I continued with Mavi, and with 1km to go I went on my own.

“Our goal here remains giving everyone an opportunity, that’s the objective. Even on the sprint stages – I’m really keen to do the leadout for our fast riders. I don’t want the stress to defend the jersey, the objective is to play the game for the team, defending here would need a lot of energy.”