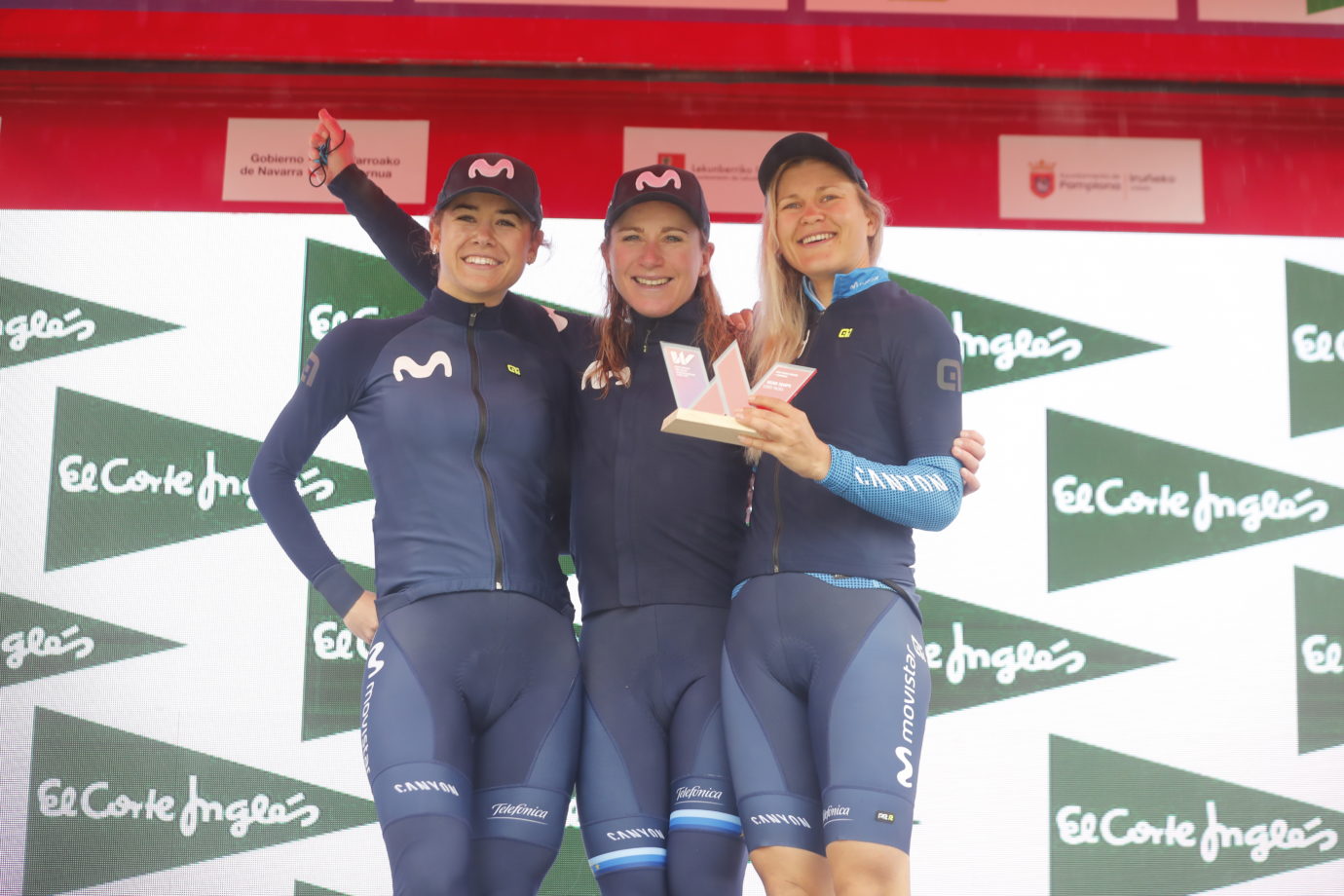 There’s very few things which taste better than winning at home. The Movistar Team increased to 12 their victory account of the 2021 season thanks to an eighth win for the women’s program, with Annemiek van Vleuten, at no less than the first of the Navarra Classics, their home region in northern Spain. A grueling parcours -eight categorized climbs and 2,600 meters of elevation gain in just 125km from Zudaire to Lekunberri-, with foul weather conditions and a Telefónica-backed squad unleashing their full potential at their best known roads.

Paula Patiño, Lourdes Oyarbide and Sheyla Gutiérrez, covering their leaders, and an extraordinary Katrine Aalerud (7th) and Sara Martín, doing everything in the finale, once again helped Van Vleuten massively en route to another success for the ‘queen’ of cycling in 2021. Both Sara and Katrine made outstanding circumstances further heighten their quality: the Spaniard, having only turned 22 in March, went after every single attack all the way to the decisive climb of Zuarrarrate, against some of the best names in the WorldTour, while the Norwegian, who crashed early on and was close to DNF, bounced back and was Miek’s last piece of support.

Van Vleuten never stopped attacking: she tried it at the steep, small Ulzurrun, with about 30km to go; twice at the Zuarrarrate ascent, even going alone with Vollering (SDW) to later be caught again; and finally, with 5km to go, another attack at the final climb of Mugiro allowed her taking a few seconds, enough to notch up her fifth win this year. One with a really special taste.

“It was a tough day in the rain, yes, but not that much of a cold day. And I think I was able to put those circumstances into my advantage, and make that difficulty become something that favoured me. Ever since I was a youth rider, Dutch coaches have always told us that these circumstances made us stronger, and in days like today, I try to profit from that. In the finale, I knew I had to leave Vollering behind -she was faster than me at the sprints of Amstel and Liège-, but it wasn’t only her – I had to get ahead of everyone. It was a final selection difficult to manage, because, at the final, six-woman split, the strength in numbers was in SD Worx’s hands, with Vollering and Ashleigh Moolman in. Being able to leave them all behind and beat their superiority makes this success taste even better.

“My two victories here are different and special all the same. The 2020 one came right after the pandemic stop, in really difficult circumstances for everyone, and the 2021 was beautiful and singular because I was able to offer it to the whole team, racing at their home region, after so much support from them in the last few months. I might be repeating myself a lot lately, but I’m really that much proud about the work they do at every race, and even more so in days like today.

“Sara was really fantastic today. Aged just 22 years old, doing what she’s done today – it’s not only a reason to celebrate for Spanish cycling, it’s also a reason for the whole team to feel proud, also for me. Big things are coming for her. Same goes for Katrine, who has been able to push on after her crash, come back and an immense job. And the whole group: Paula, Sheyla, Lourdes, Jorge (Sanz) and the whole staff.”