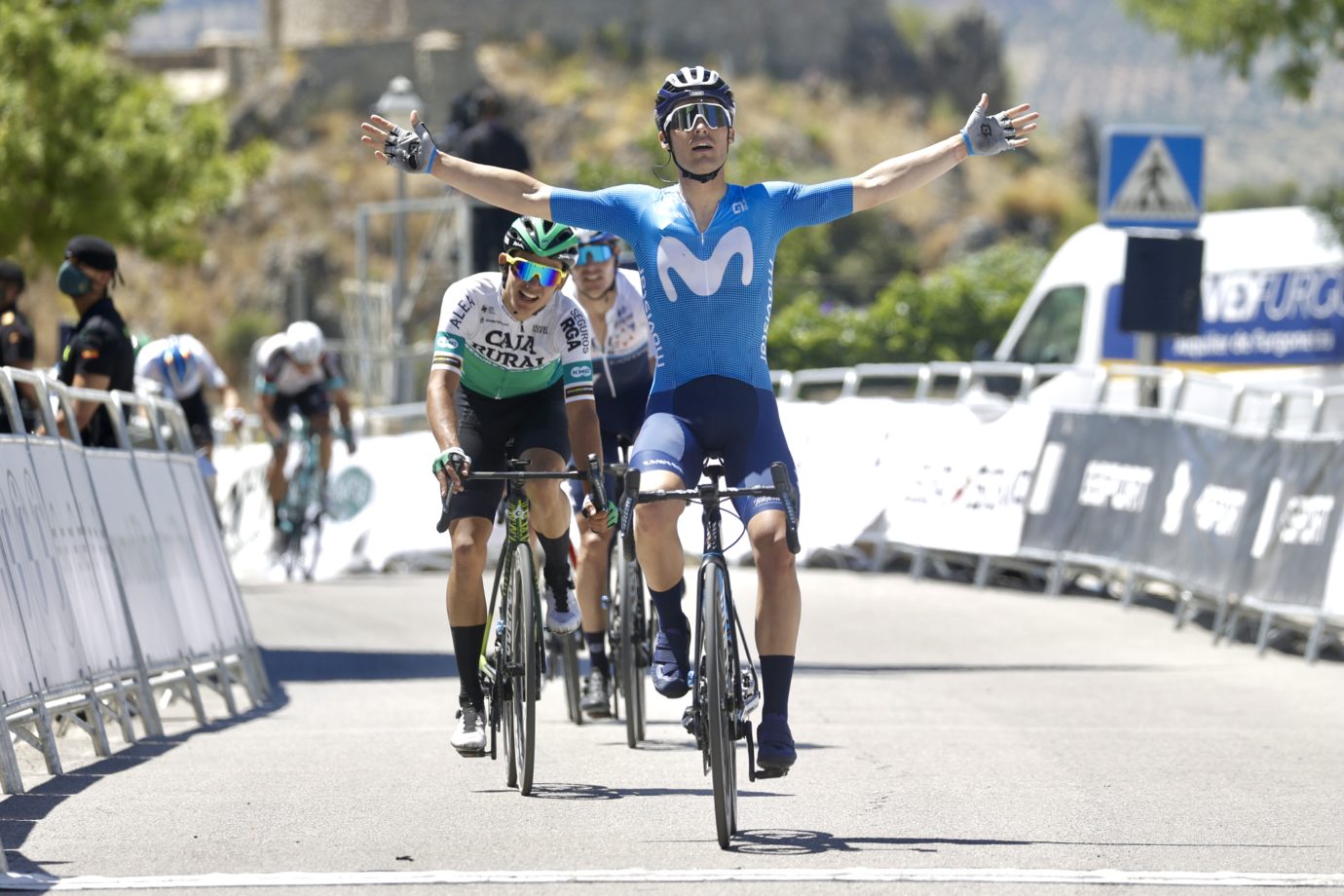 As he already did last year at a tough finish, Iznájar’s, Gonzalo Serrano used a slight uphill to his full advantage in Zahara de la Sierra to open his Movistar Team account on stage one of the Vuelta a Andalucía, a rolling course in western Andalusia’s ‘White Towns’ over 152km from La Cala de Mijas. The Telefónica-backed gave its all for the Madrilian to take a brilliant success, the Blues’ men’s team’s fifth and the Abarca Sports organisation’s 13th in the 2021 season, which never stops giving them joy.

As the Blues initially worked with a couple of riders to chase down the early break with Sprengers (SVB), Oliveira (UAD) and Soto (EUS), their pace and implication became really evident at the last 10km as all Sebastián Mora, Abner González, Juri Hollmann, José Joaquín Rojas and Héctor Carretero took themselves to the front. The ‘Blue train’ would never leave the front again, reducing the main group to about a dozen riders, including Miguel Ángel López (9th), quite motivated for this Ruta del Sol.

Serrano bested Orluis Aular (CJR, 2nd) and Daryl Impey (ISN, 3rd) to don the leader’s jersey before Wednesday’s stage two, a key one for the overall result, with La Hortichuela (Cat-2) just before another steep ramp in Alcalá la Real.

“I might as well have to come and live here! (Laughs) I don’t know if it’s just coincidence, the heat here… but in the end, it’s two stages in consecutive years. It makes me so proud to be part of the Movistar Team. Having such experienced riders, such as Rojas, and they give a hand to you, who have just come to this team – there couldn’t be a better reward to pay them back for the efforts than a win. It’s difficult to make things better than we did today. I had such good legs, the teamwork was excelent – just as we planned with our DS, ‘Arri’, on the bus.

“Arri was already here before, checking the routes, and he knew this really well – the Vuelta a Andalucía had also used these roads last years. We knew it, we knew that the little town with 8-9km to go was the place to start pushing. The race was always a little bit up from there, and my team-mates put on a really good pace to try and take the sprinters off the group, which we achieved. I knew that the road narrowed with 2km to go, and there, Rojas further picked up the rhythm, then Héctor was incredible – he left me at the 300, 400m to go mark, which was more or less where we planned to launch it.

“I raced both the Flanders and Ardennes classics, then I took some rest, because it had been a very demanding few months. Talking with my coach, I knew my legs were good, yet at the first day in Mallorca, I had some cramps and couldn’t perform well – it might have been the first warm day of the season. It doesn’t get all morale off you, but you feel disappointed, because you know you have to take advantage when you’ve got good form. This win goes to all of my team-mates: the staff, carers, mechanics – everybody who supports us and the Movistar Team.

“Wednesday’s finish is somewhat similar – it’s not the same, it’s quite more difficult, but it suits me well, too. Stage three will be quite different, though: it’s a really hard one, more than 4,000m elevation gain, and having a strong leader as Miguel Ángel, we have to race for him, because I don’t know how far I’ll reach. We know he’s going well, so he has to be the leader. I’ll try and contest again the stage tomorrow – keeping the jersey would be so nice, but for the GC, we should go with Miguel Ángel.”