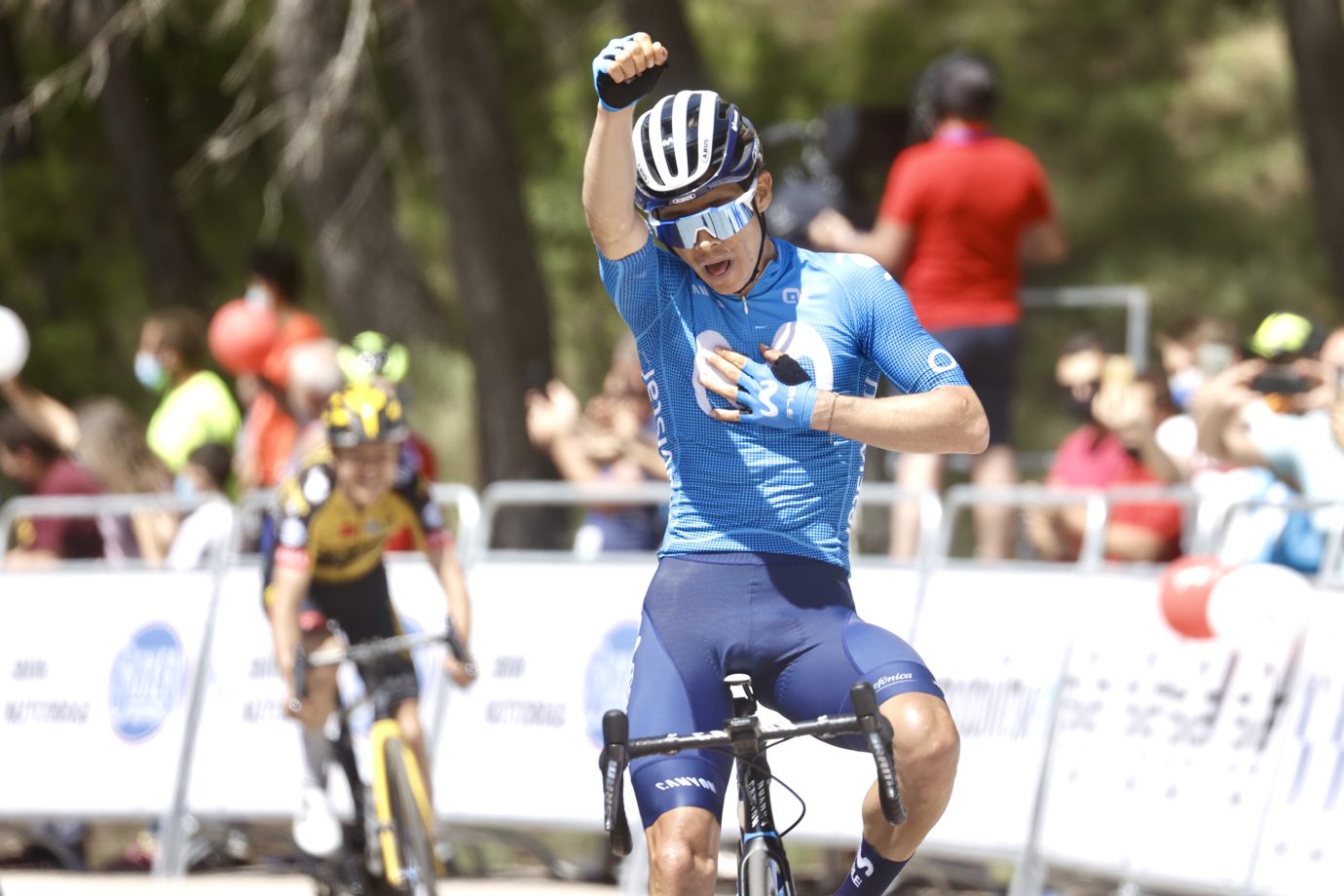 Colombian leads Ruta del Sol as he crowns in Villarrodrigo a true exhibition by the Blues, with a stellar Héctor Carretero. Telefónica-backed squad up to 14 wins in 2021 -six for the men’s team-

The long times of suffering were finally left behind for Miguel Ángel López (Movistar Team) on Thursday. More than seven months after his crash in the 2020 Giro d’Italia; following a long recovery, unable to ride his bike until Christmas; suffering from covid, which sidelined him for an extra month; and out of racing until late April with the Tour de Romandie, the Pesca native was still able, in barely ten days of racing, to snatch a win for the Blues with a fantastic display at the Queen stage of the 2021 Vuelta a Andalucía -177km, with six categorized climbs, between Beas de Segura and Villarrodrigo-.

López started giving sense at the Collado de los Yesos (Cat-2), the day’s penultimate ascent, to the long, strong gamble made today by the José Luis Arrieta-led group, with Héctor Carretero joining the early break and the likes of Mora, Hollmann, Rojas, Serrano or Abner González picking up the pace behind to help their leader attack with less than 20km remaining. ‘Superman’ left behind the opposition from Carlos Rodríguez (IGD) and race leader Ethan Hayter; took himself to Carretero, who completed a five-star performance to support him through to the final kilometer; and didn’t have any problems to win the uphill sprint against Antwan Tolhoek (TJV, 2nd) and James Piccoli (ISN, 3rd).

Miguel Ángel is the new GC leader, with two days left in Andalusia, after claiming the men’s Movistar Team’s sixth success of the season, the 14th for the Abarca Sports organisation since the start of 2021. A year – more precisely, the last month and a half – which hasn’t stopped mixing grief and glory for the Blues.

“It’s a really special day. The team was magnificent today. It wasn’t to be yesterday, we came second, the finish was so hard, yet we started today with a plan to pay back the whole team after the work they’ve been doing from the very start of the race, and all team-mates were excellent again. Héctor was the key man today: we had him joining the breakaway, looking to have someone ahead to support after an attack, but all the other team-mates, Rojillas, Abner… did an impressive job so I only had to get myself to Carretero, for him to support me until the end. It was sensational.

“I’m so happy because it’s been really hard to get here, to be back in the peloton, even more so to chase results. Behind this, there’s loads of work which people often don’t see. I’m back after almost eight months away. I didn’t race basically since the end of the Tour de France. It was hard to return, I also caught covid… This is a new project, which I face with great excitement. I’ve found myself really comfortable here, they’ve always looked after me, and it shows. My team-mates, the work they do every day – it’s so important.

“We achieved the most difficult thing today. As ‘Arri’ says, grabbing the leader’s jersey is the hardest, but it’s not over at all. There’s two stages now ahead, which we must pay extreme attention at. Hopefully we can keep this until the end. This victory is a tribute to all people in Colombia, the Movistar brand, my family, my wife and child, and my mom, who was celebrating her birthday two days ago. I would have wanted to bring her a win yesterday on the cobblestones, but I had to wait an extra day (smiles).”