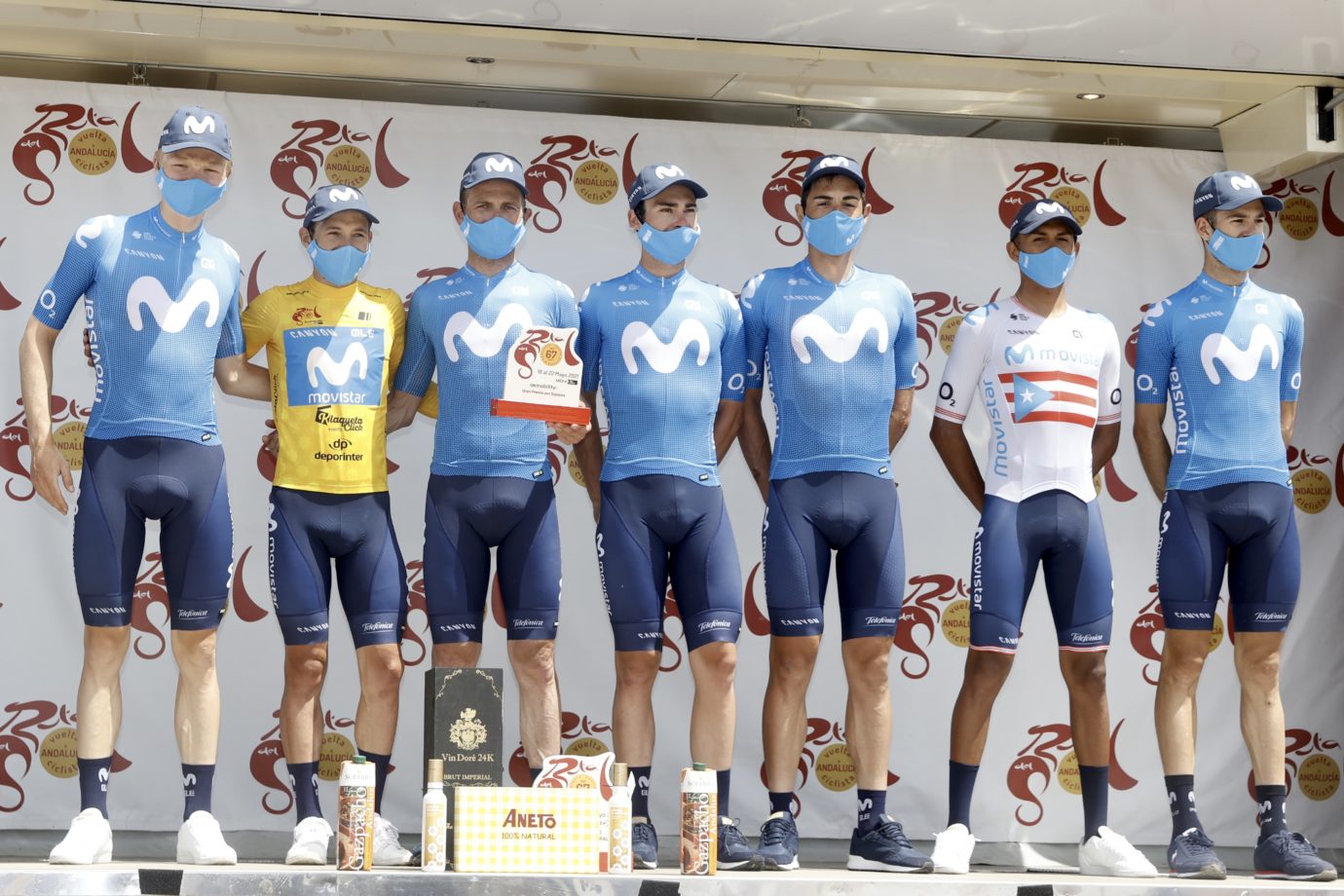 It was a day free of setbacks at Saturday’s short, intense final stage -107km from Vera to Pulpí, in Almería- and Miguel Ángel López (Movistar Team) was able to add the 67th edition of the Vuelta a Andalucía to his already considerable palmarès. It’s the fourth GC victory achieved by ‘Superman’ in his career, as well as the first for the Telefónica-backed squad – only a month after making his debut in the Blue jersey.

The pursuit work from Juri Hollmann and the protection by Mora, Serrano, Rojas, Carretero and González all kept López calm early into a really well controlled stage, the early break from Okamika (BBH), Cuadrado (EUS) and Mertens (SVB) caught with 10km to go. The pace was, however, high all day, as INEOS and BikeExchange reduced the bunch into the final Geoda (Cat-3) climb to barely 20 riders. That selected field included Serrano (6th today) and López (4th), who, just like his team-mate, had to avoid a crash from Stannard (BEX) and Impey (ISN) into the final sprint. Hayter (IGD) took the day’s honours.

This success, the 15th victory for the Movistar Team in 2021 – seven achieved by the men’s team -, also marks the Blues’ tenth overall win in the Ruta del Sol, a milestone achieved by López after a long recovery process that is now happily left behind, with a strong Telefónica-backed squad by his side.

“I’m so happy with this victory. We’ve finished the day in the best possible way. We came to this race with some good mentality, looking forward to showing our colours and taking this Vuelta a Andalucía really seriously. We had already been racing in Romandie, where I gained confidence after seven months with no racing, then two of the Mallorca Challenge trophies and then here, where we came with an aim to win a stage – and see what we got!

“Regarding today’s finish, I was riding a bit more behind because, in the end, it was a better sprint for riders like Impey or Hayter and we had a better chance with Gonzalo to go for the stage win. I was a bit behind, as I said, but into those final turns I decided to gain some positions to avoid any time gaps, and as the crash happened on the left-hand side, I was on the right and ended up ahead of Gonzalo. I don’t even know how that crash happened, can’t say anything about it.

“It was a super job from the whole team. Thanks to all the boys, they were sensational and made things quite easier for me. Things are going so well at this moment in the team, my adaptation to this new structure is going well and there was no better way to thank them for the support to bring them a stage win + GC here. Also Gonzalo’s victory here on day one – a great week for everybody!

“We will now take things a bit easier in the upcoming days, then travel to France next week for the Critérium du Dauphiné, my main race before the Tour de France. I want to dedicate this victory to my wife and son, who were surely watching the stage at home. Hope they enjoyed!”