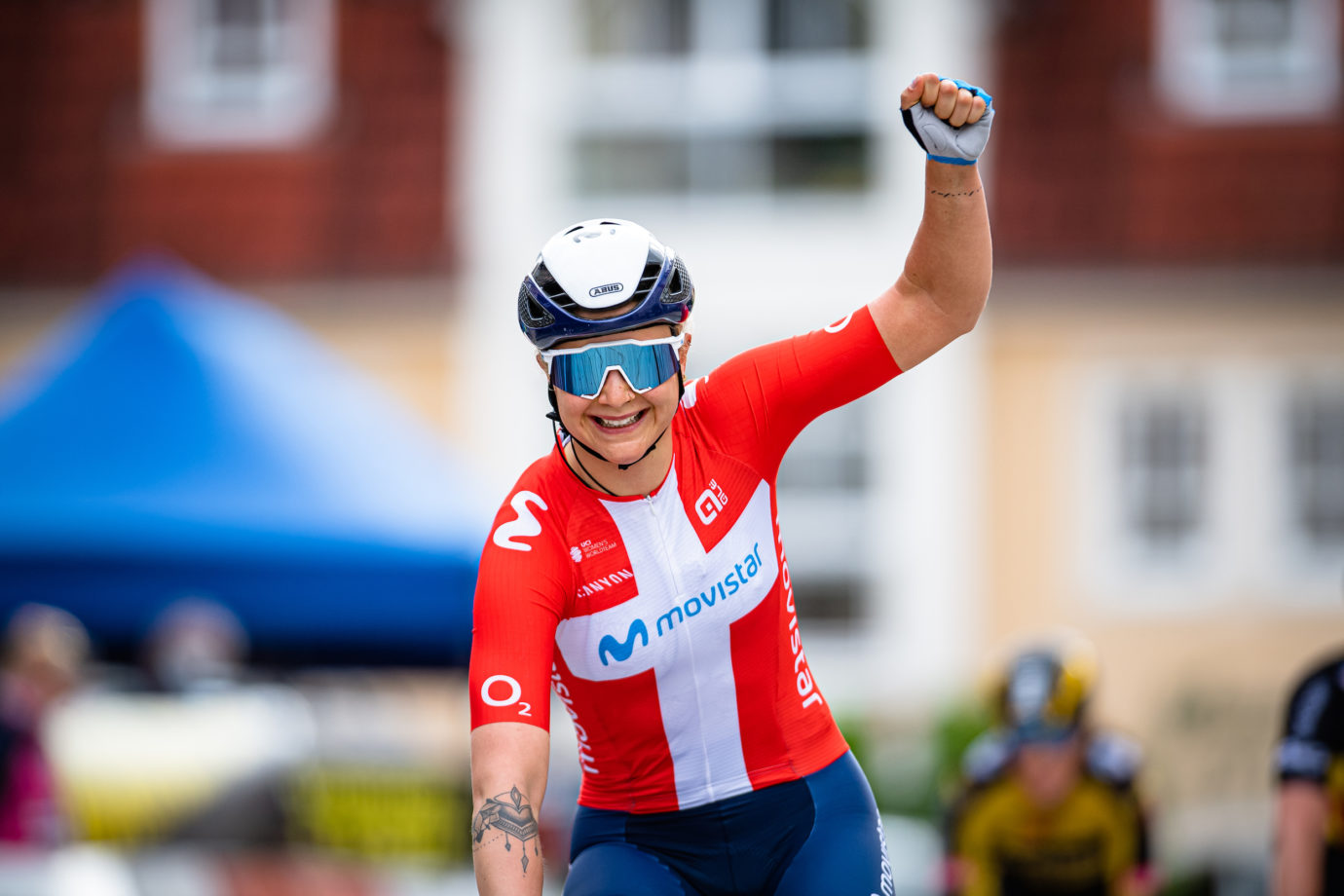 Danish champion -supported by a strong Movistar Team- comes back from challenging situation with early break, joins decisive move to win in Schmölln with sensational strength. Emma up to four wins in 2021 as Movistar Team reach 16, nine for their women's squad.

Emma Norsgaard (Movistar Team) only needed a win to unleash her enormous potential. And it seems like, once that first victory came in Luxembourg earlier this month, the dynamics could only improve. The Danish champion is the first leader of the Lotto Thüringen Ladies Tour (UCI ProSeries), which started in that eastern German ‘land’ with a hilly, windy 88km course, three laps, around Schmölln.

The race wasn’t particularly favouring Norsgaard’s chances early on, as the Telefónica-backed squad had to chase hard in the first half of the stage to bring back a 10-woman breakaway, with all big teams represented, where Alba Teruel initially featured yet lost contact to due to a mechanical issue. The Spaniard’s work, together with team-mates Gutiérrez, Oyarbide, Biannic and Guarischi, was effective as Norsgaard was able to bridge back to a first group of 17 riders, later reduced to nine over the final QOM, which contested the final sprint for the win.

An Unstoppable Norsgaard bested Lucinda Brand (TFS, 2nd) and Lotte Kopecky (BEL, 3rd) over the cobblestones and now leads the GC, which will still see many changes over a hilly course all the way to Sunday’s finish. For now, the ‘Danish Rocket’ is again enjoying a yellow jersey like the one in Luxembourg, after a fourth success in 2021 which increases the Blues’ account to nine (16 for the whole Abarca Sports organisation so far this year).

“This team is unbelievable. Yes, I know I say it every time I win, but this team is crazy good. I’m so proud to be a part of this, and today it was incredible, really. The way they worked, to get us back into contention after that early break so I could bridge back, was so good, I’m just so, so happy!

“Once I got through that final QOM, the last kilometer was mostly downhill, on cobblestones, and to be honest, I was so scared with that finish. With 1k to go I just took the front, thinking: ‘Ok, hopefully nobody will pass me’. In the end, it paid off! (Laughs)

“I don’t know if it’s easier to win or not now that I’ve got those Luxembourg victories behind me, but as a team, we have such a great spirit and we’re willing to sacrifice everything for each other. This is what makes the victory easier, from my point of view.

“Now that we have the leader’s jersey, of course we have to defend it and work hard, but with this team, everything is possible. I feel like this is the best team I could have, so I’m not nervous at all.”