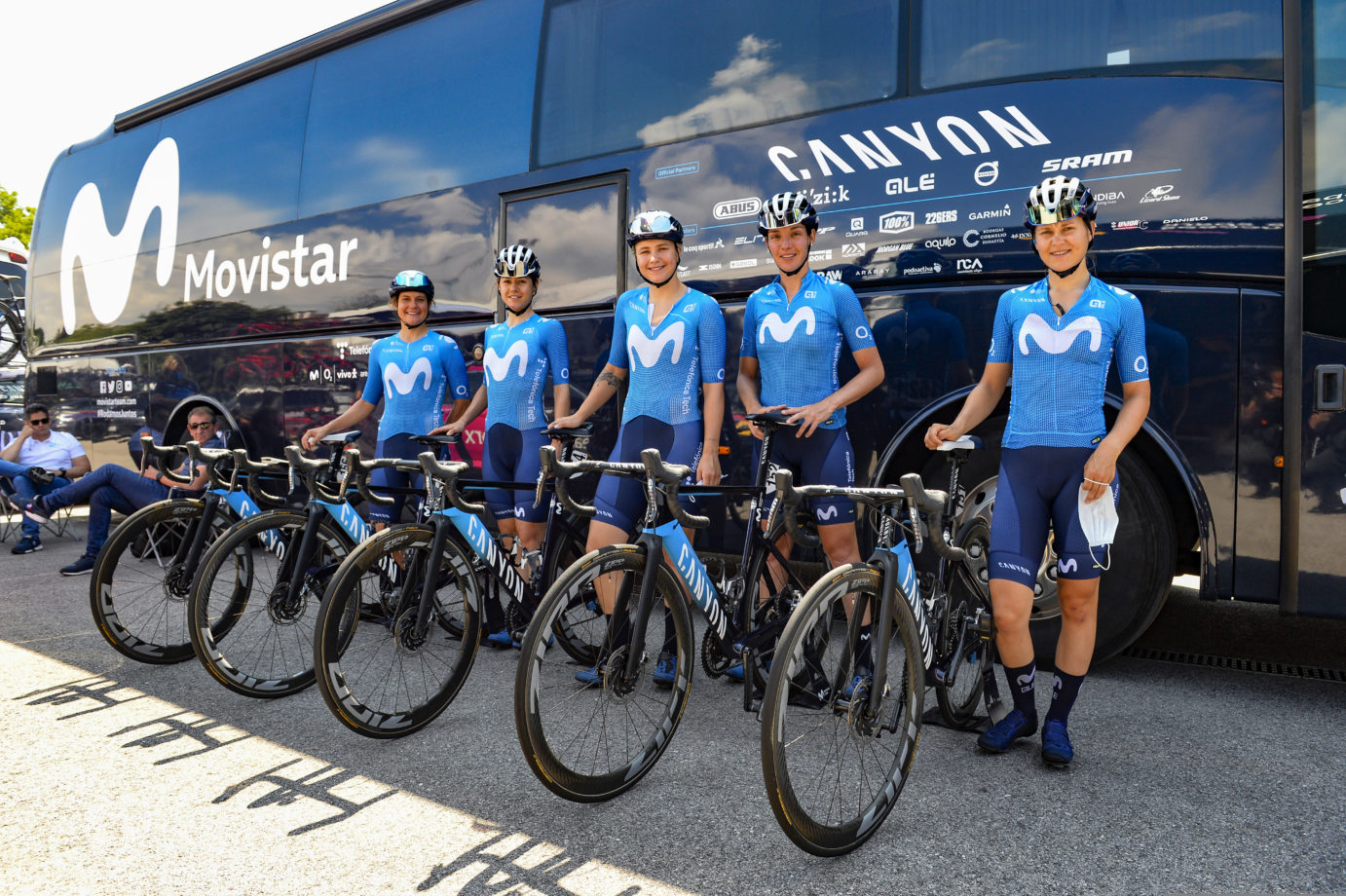 The final stage of this Giro d’Italia Donne 2021 was a proper epilogue for the race, as it had a demanding circuit with 3 laps and 3 short but intense 3rd category climbs.

But the stage went quite different to the previous ones, with a top of the line break that finally made it to the end. Our riders fought to reduce the gap along with other teams in order to put Emma Norsgaard in a good position for the sprint. But it was the break’s sprinter who took the win.

Rivera (DSM) won ahead of Deignan (TFS) and Chabbey (CSR). The GC winner, Anna van der Breggen (SDW) got 4th and our Emma Norsgaard was the fastest in the bunch sprint, finishing up 5th and showing an outstanding shape and regularity ahead of the upcoming Olympic Games.

A win, two podiums, a 5th place in the TTT and the assurance that the team gave everything everyday, a valuable loot for our women in this Giro d’Italia Donne 2021.

The ‘Queen Stage’ of this 2021 Giro Donne had 3 climbs (3rd, 2nd and 1st. category) the latter being an uphill finish at the challenging ‘Monte Matajur’, a 12 km. climb with slopes up to 14% gradient.

Three women break, such as yesterday, that managed to get up to 3′ in the second climb. Sara Martín was again in pursuit duty along with Aude Biannic. The break was caught before arriving to the final climb, where several attacks happened, leaving Longo Borghini (TFS) and Moolman (SDW) as head of the race.

Moolman did the winning move, dropping Longo Borghini, and was eventually followed by her teammates Vollering and the ‘Maglia Rosa’ Van der Breggen. Leah Thomas fought most of the climb along with the leader and the top GC contenders, finishing 12th.

Another circuit, as it’s the norm in this Giro Donne, this time a flat one with only 2 laps that was perfect for a bunch sprint.

Three women conformed the day’s break, Studenikina, Carbonari (BTW) and Vettorello (TOP). The impressive job by Sara Martín along with Leah Thomas and Aude Biannic made possible to catch them on the last lap, 3 km. before the finish line, preparing the terrain for Emma Norsgaard.

Wiebes (DSM) was the winner, with Emma having the 2nd place and Sperotto (MNX) 3rd.

Six climbs to Puegnano del Garda within 5 laps to a 17 km circuit was the menu for the riders today, in another warm day through Lombardy roads.

The solo attempt by Brand (TFS) lasted until the last lap. Then Bastianelli (ALE) and Koreevar (LIV) got a minor gap, they were followed by a 15 unit group in which Leah Thomas was present, followed by a bigger peloton with Katrine Aalerud and Emma Norsgaard.

Both groups eventually came together and the two-rider break was caught shortly after the finish line, were Vos (TJV) won ahead of Longo Borghini (TFS) and Van der Breggen (SDW). Leah Thomas finished in the top 20 after a stage that was very fast pace from the first lap.

Bouncing back from a 2nd spot at last Tuesday’s first bunch sprint opportunity of the race -she finished behind Wiebes (DSM) in Carugate-, Emma Norsgaard (Movistar Team) gave her squad one of the longest-awaited victories, the first win in the Blues’ four appearances in the Giro d’Italia Donne (UCI ProSeries), with a fantastic sprint on stage six, the longest in this year’s event, over 155km in and around Colico, by the Lago di Como.

The success had a great contribution, just like in previous days with their hard work, by the likes of Leah Thomas, Sara Martín or Aude Biannic, fully involved in keeping the breakaways under control -including a strong duo with Moolman (SDW) and Longo Borghini (TFS)- and later leading the ‘Danish Rocket’ out for the sprint, the Frenchwoman notably active in that duty.

Norsgaard bested Rivera (DSM), Vos (TJV) and Bastianelli (ALE) in a really open sprint, which takes the Movistar Team’s victory account to 27 in 2021, fourteen obtained by a women’s program which never stops brinigng joy to the Blues’ fans wherever they go. The Blut outfit, which continues to aspire for a decent overall result with Katrine Aalerud, should still have a maximum three chances with Norsgaard through Sunday, starting with tomorrow’s lumpy stage seven around Puegnago del Garda (109.6km).

“It’s been an amazing job from the whole team to carry me in good position through those final kilometers. Things couldn’t have gone better today, to be honest. i’m so happy to have been able to crown this after yesterday’s second place, and especially reward my team-mates for everything they’ve for me through to the finish. It’s always said in these situations, but it’s true: this is the result of teamwork. I came close, then I took this win and now the goal has to be to aim for some more. I’m really enjoying this race, I always love doing the Giro, and hopefully with this great group of girls we can continue offering joy to this team.”

A stage were the odds favored a bunch sprint, with 3 passes through the finish line before the final lap of a completely flat circuit. A day that started next to the ‘Castello Sforzesco’, traditional start of the Milano-Sanremo.

The grouped remained together in the first pass, but after that a break of 6, composed by riders of TOP, BPK, VAl and MNX, managed to open a gap that went up to 2’20” until the last lap. Novolodskaya (MNX) was one of them and jumped in search of a solo win but was caught with 3 km to go.

Sara Martín was key to bring down the break, as she was pushing relentlessly at the front of the bunch for a good part of the last laps, while Aude Biannic rode next to Emma to avoid any danger.

“The plan today was to go for the win, it was a perfect stage for me, Yesterday I had the opportunity to just go relaxed in the TT so I could focus on today, unfortunately we only became second but I’m happy”.

“Sara did amazing pulling and in the end I had Aude always with me and guiding me through every difficult situation, yeah I’m so proud of them, it’s also showing what a great character Sara is showing, pulling all day, it’s super nice to see”.

Impressive landscape and steep terrain in a time trial that finished near the waterfalls of Riale. Van der Breggen (SDW) won with more than a minute with her teammate Vollering and Brown (BEX).

Katrine Aalerud scored a fantastic 7th position, at 2’14”, that puts her in an interesting position for the stages to come. Leah Thomas did a notable TT too, stopping the clock 32″ after the Norwegian.

“It was flat in the beginning so I’ve tried to save the legs for the climb, and then I tried to find a good pace uphill, I just went by the feeling and I did my best today. I started this Giro Donne feeling quite bad so it’s good to have my legs working again”

(About the national TT champion jersey) “I think it’s beautiful, it’s was nice to show it in the climb today and enjoy to wear it. I have just wear it once before, last year, and this is my first time this year, so it’s quite special”.

Rain finally showed up in this edition of the Giro d’Italia Donne, although weather in the start at Casale Monferrato was dry.

The race remained ‘calm’ until terrain went uphill, such as yesterday. Several attacks happened in the first climb (Morsasco, 3rd. category), with some groups of up to 25 units that were neutralized. Brand (TFS), Vos (TJV), Lippert (DSM) and Chabbey (CSR) led the successful break attempt that lasted until the end of the stage.

Katrine Aalerud, Leah Thomas and Emma Norsgaard followed them in a group of about 30 riders at 2’20” when the head of the race made the first pass through the finish line.

Hilly terrain with a 4 category climb before arriving to the big finale in the mythical ascent to Prato Nevoso. Rain menaced the last kilometers but didn’t show up in another warm day.

The race ‘stood still’ from the beginning to the start of the final climb, with no attacks and the peloton riding compact. Fisher-Black (SDW) and Magnaldi (WNT) where the ones that tried first and managed to have a gap.

Then Van der Breggen (SDW) made her move, connecting with the front and eventually dropping them to win ‘solo’ and secure the ‘Maglia Rosa’. Her teammates Moolman and Vollering completed the top 3.

Katrine Aalerud was the first of our women, getting in the top 20 at 6′ from the winner.

Long straights and a lot of heat for the start of the renewed Giro d’Italia Donne in Fossano, were the riders had to face temperatures up to 34ºC.

TFS takes the win with 8″ to SDW and 40″ to ALE. Our women finished up 5th at 55″ from the winners in a very good TTT. Winder (TFS) is the first leader, Emma Norsgaard was the first ‘blue’ to cross the finish line and is now 18th on the GC.

“I’m really proud about how we raced today, everybody gave everything they had. I think we should be really proud of our result and how everybody contributed to cross the line. Because of the nature of the course and how it was predominantly flat with big open roads, I think having really strong riders definitely contributed. With those kinds of speeds and stuff, working on the pacing and knowing exactly were you push and were you don’t push… that kind of things come out of practice. We are in a very good place starting out for the rest of the 9 stages, 9 stages is a long time a pretty much anything can happen”.