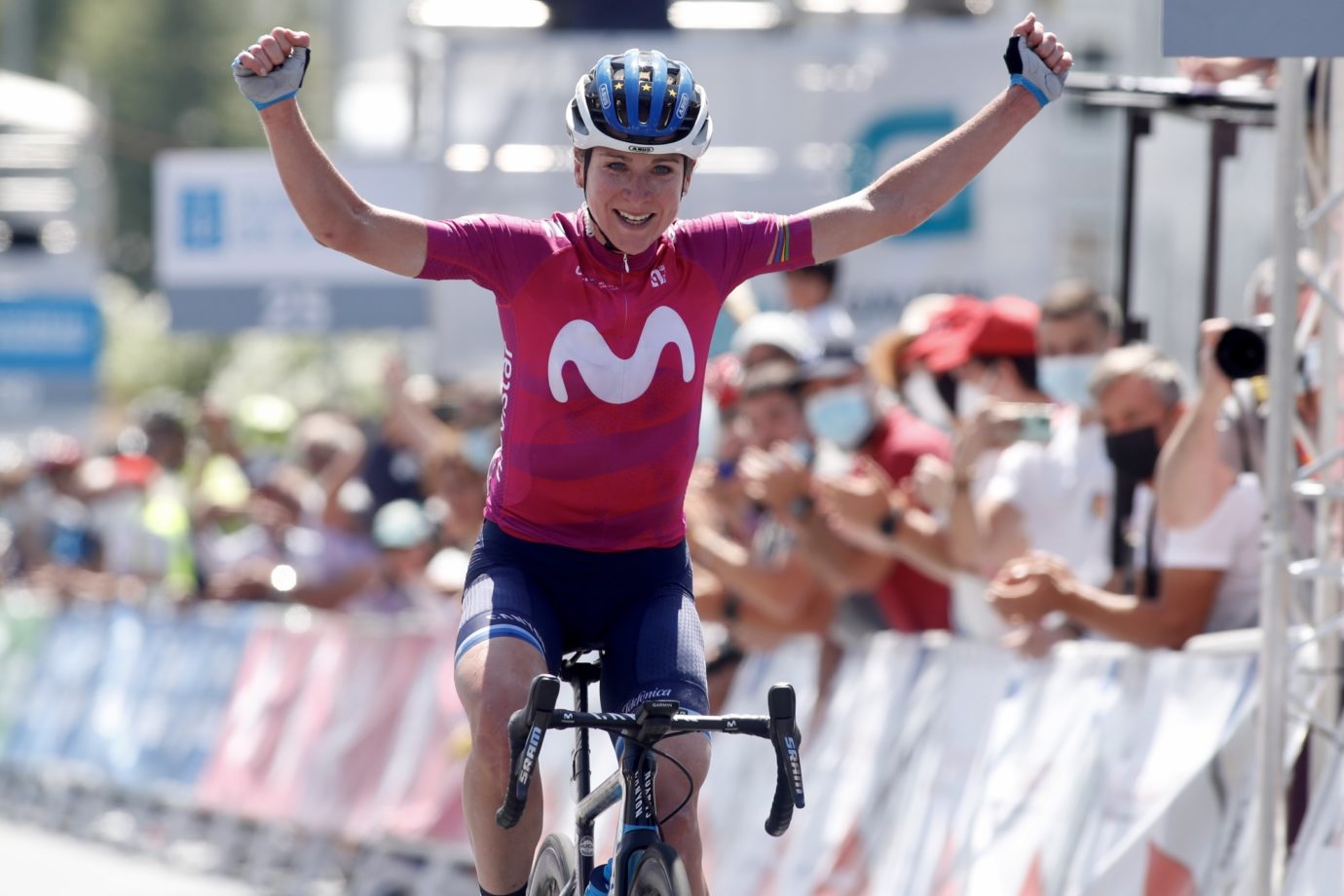 The best rider in the women’s peloton added on Saturday another impressive victory to her incomparable palmarès. Annemiek van Vleuten (Movistar Team) promised yesterday, following her victory at the mountain TT of the 2021 Ceratizit Challenge by La Vuelta in Manzaneda, to not offer Swiss champion Marlen Reusser (ALE) the GC as a present after her stage one success. And today, on day three (109km) of the race towards Pereiro de Aguiar, she launched one of the attacks which have made her so famous and reached the finish line alone, notching up her 11th success of the year and the Blue outfit’s 34th in 2021.

Following a superb descent leadout from Sheyla Gutiérrez towards the foot of the A Lama climb (Cat-2), more than 60km from the finish, the Olympic TT champion attacked from the peloton, taking Vas (SDW), Niewiadoma (CSR) and Longo Borghini (TFS) as only company. She then left them behind one by one -with the Italian as last ‘survivor’- to reach the top with two minutes over a pursuit group where Reusser tried to reduce the gaps to no avail. The advantage rose to an incredible 2’48” across the finish over Liane Lippert (DSM, 2nd); more than 3′ on Reusser; and over 7′ on the peloton.

Van Vleuten will enjoy an advantage exceeding one minute and a half in the GC heading into the final stage on Galician soil, the least hard (never the easiest) when it comes to its profile, with 107km between As Pontes and Santiago featuring lots of little climbs and an uphill finish. The whole Movistar Team will be at Miek’s service to try and secure what would be an astonishing overall success.

“It was a surprise to myself how I did today. I had a good block of altitude training before this race and I knew I wasn’t super well rested. The first two days of racing helped me a bit and I felt great today. We had a really good plan with the team, trying to push hard into a tricky downhill after which it was the moment to go on the attack, because into such descents, everyone would be riding in one line. Kasia (Niewiadoma) and Elisa (Longo Borghini) went with me, but at some point they couldn’t follow and I realized: ‘Maybe I’m in a really good shape; maybe it’s possible to go for it!’

“After the first day I thought we might have lost the GC, but I still wanted to try, because – you never know. To win a general classification in a stagerace, you need to have a really, really strong team, and if I was able to isolate Reusser, I could have a chance, which happened today. It will be another hard day tomorrow. This is not the Tour de France and we don’t go to the Champs-Élysées tomorrow. I will need to be really focused to defend, but my team have the confidence to fight for this.”