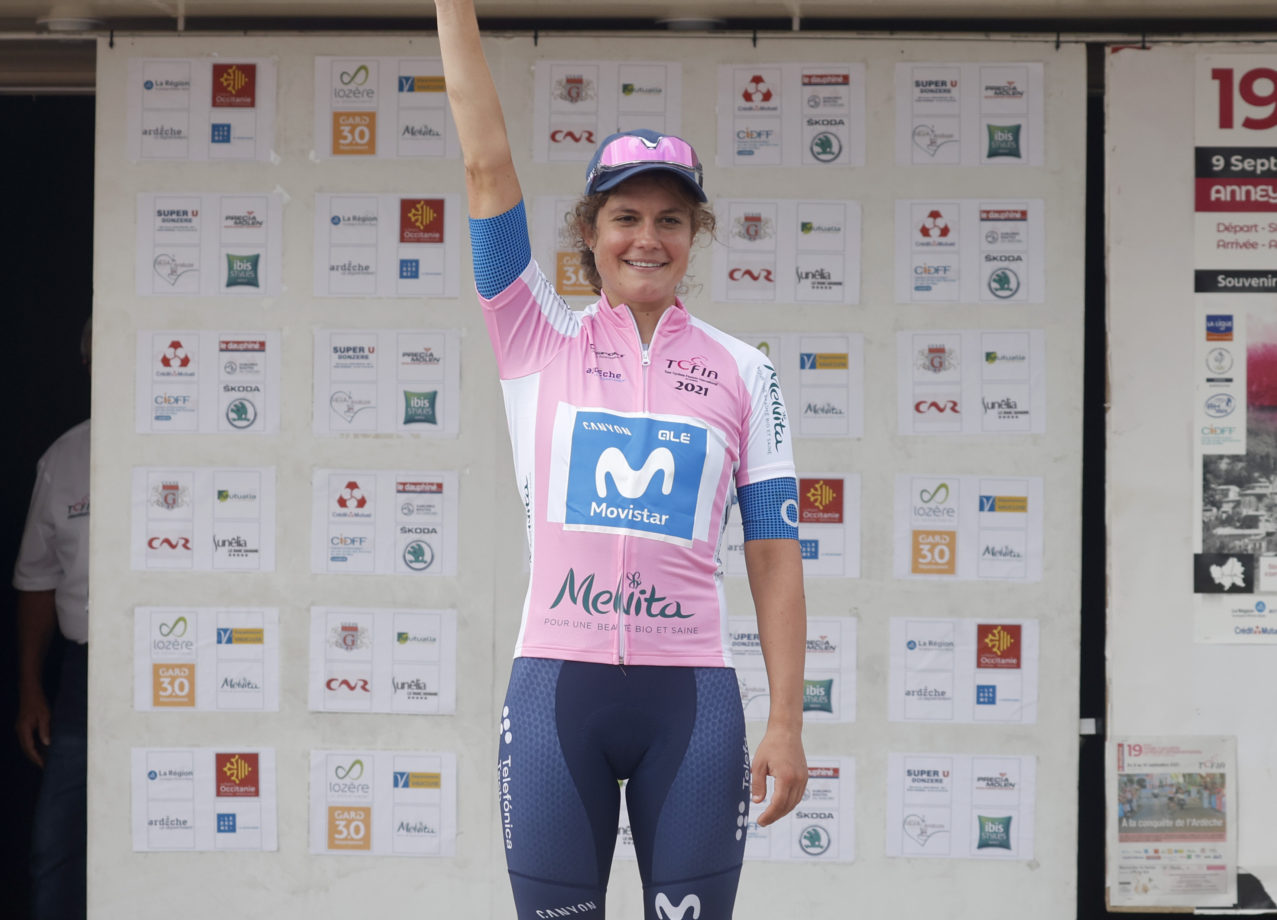 American from Movistar Team takes GC lead in France after joining crucial break -7′ gap at the finish-, launching brilliantly-timed attack into final kilometers; Movistar Team up to 36 victories in 2021.

She had shown her great quality all over the 2021 season, both into team duties and individual efforts. She went really close to raising her arms victorious only four days ago at the Ceratizit Challenge by La Vuelta, neutralized with 200 meters left from the finish of stage four in Santiago. And finally, on Thursday, Leah Thomas (Movistar Team) could offer the team who have supported her all over this 2021 season a big moment of joy, as she became the new GC leader of the Tour de l’Ardèche (UCI 2.1) with a brilliant success on stage two.

The stage, or even the race itself judging by the finishing gaps -more than 7′ on the main pursuit group-, was decided on the slopes of Les Oziers (Cat-3), 70km from before the end. A ten-woman group, including the American, escaped there and opened some crucial gaps on the subsequent flat and the last two climbs. Following the last QOM, Thomas attacked from the group -with the talented likes of Lizzie Deignan (TFS), Mavi García (ALE), Paulien Rooijakkers (LIV) or race leader Arlenis Sierra (MNX) in pursuit- to reach the finish with nine seconds, the margin she now holds in the standings.

It’s the Movistar Team organisation’s 36th success in 2021, the 22nd snatched by the women’s program, as the Blue now focus on defending Leah’s pink jersey in the upcoming five stages. Before Saturday’s mountain-top finish of the Mont Lozère, the riders will tackle what is expected to be a sprint day, stage three of the race, to Avignon on Friday.

“After the race was relaunched following a crash, with no ambulances left -I couldn’t even hear it, I was fourth wheel in the peloton as Alicia was leading the descent-, we tackled the third KOM at a decent pace and a small group formed over the end of the steep part. After that, it was seven to eight kilometers of rolling roads, still up, and there were a lot of attacks. I followed those moves, I was particularly following the attacks from Lizzie (Deignan), and at some point I just looked back and we had a gap. We started working together very quickly and that’s how the break got established.

“I wasn’t planning on attacking that far out. Liv had two riders, and they were doing a great job of attacking and counter-attacking. It became pretty tense with regards to who would work to follow them. When it seemed like the group wouldn’t be cohesive anymore, my best card was to attack from far out and try and hold it to the line.  There wasn’t much planning into it, it was kind of a reaction. I just pedalled as hard as I could to the finish.

“It feels great. I’ve done a lot of work this year, and to be able to get onto the top step of the podium is very special. It’s great to have the support of other girls here, their encouragement is great. There’s five more stages, which means: five more opportunities for us. Also a lot of work to try and hold onto this GC spot. It was really nice and rewarding, but this is also kind of just the beginning, so I’ve not thought about it too much.

“I want to go for the GC overall and hold it for as long as I can. There’s some really hilly stages coming up and there’s some really strong climbers here. That will be quite the task, but it’s nice to be in this position. Except for those 10 riders, there’s some big gaps and room to play with against the rest of the field, and hopefully some of the other girls in the team can enjoy their opportunities so we can continue to be on the podium at the end of the stages.”