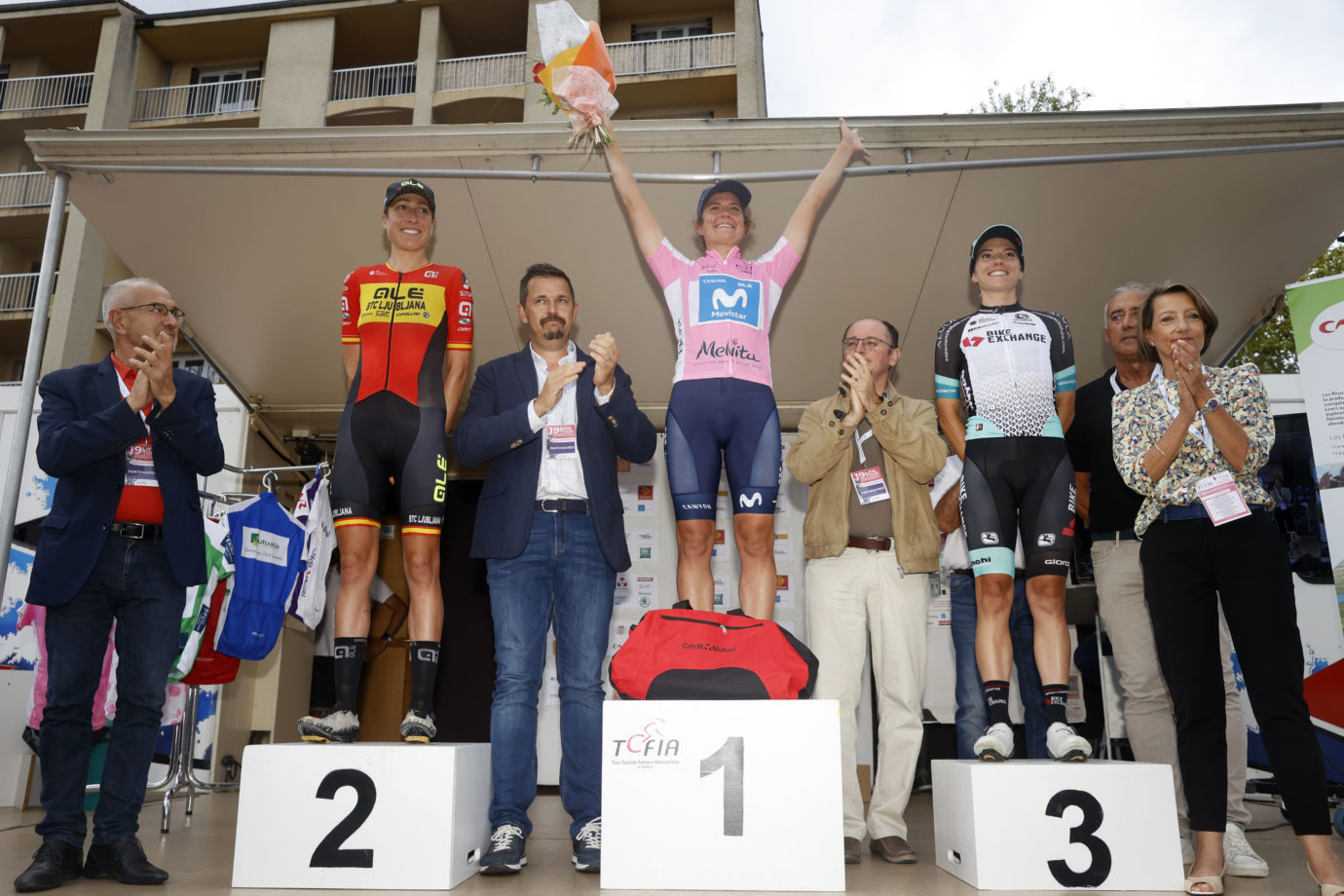 Fantastic Telefónica-backed squad -with Teruel, Guarischi, González, Patiño and Gutiérrez all devoted to supporting the American for the last five days- conquer their fifth women’s GC win in 2021, Blues’ 37th success this season.

Let this 2021 season never end! The Movistar Team‘s women’s program continues to bring joy to their fans in a sensational summer for the whole Telefónica-backed squad. Following five days of tough defense, after a crucial blow to the GC standings inflicted by Leah Thomas with her stage two success, the squad directed on French soil by Pablo Lastras claimed with the American the overall victory at the 19th Tour Cycliste Féminin Internationale de l’Ardèche (UCI 2.1), one of the longest, most mountainous races in the professional circuit.

The commitment and effort from the Blues was perfectly exemplified by their work on the short, intense final stage, over 81km between Le Pouzin and Privas with three grueling ascents and a dangerous break which the Movistar Team had to battle hard to keep under control. The big turns at the front by Alba Teruel -right from the start-, Barbara Guarischi -following the initial climb to Fontenelle (Cat-1)-, Alicia González, Sheyla Gutiérrez -en route to the decisive Col de Bemas (Cat-1)- and Paula Patiño -right before the finish- was able to always keep close a trio featuring Jeanne Korevaar (LIV), located 2’03” behind Thomas in the GC.

Right before the top of Bemas, an attack by García (ALE), 2nd in the standings, together with Rooijakkers (LIV), fourth, forced Leah Thomas to do their best into the early turns of the downhill and, along with Santesteban (BEX), chase them down and win the pursuit group’s sprint, 4th behind Brand (TFS), Korevaar and Kennedy (BEX). Another display of Blue power to snatch their fifth women’s stagerace success of the season -after the Festival Elsy Jacobs (Norsgaard), Setmana Valenciana, Ladies Tour of Norway and La Vuelta (Van Vleuten)- and the Abarca Sports organisation’s 37th in 2021, the 23rd for a superb women’s Movistar Team.

“I think one of the best parts about this week was when Pablo really kept us calm and really made sure we were patient and got our team together, so we never were isolated. Obviously, it would have nice not to have that break up the road, but there were a bunch of attacks, and we were killing ourselves trying to keep them from going, and eventually it was better to let Korevaar go, and control from behind. When she went, we waited for a couple of minutes for the team to get together, set a good pace and kept the gap under control.

“Sheyla and Paula did a fantastic job setting a hard pace over the vast majority of the final climb. Over the top it was more open and windy, and Mavi did a first attack – obviously, it was my job to cover, and I covered that one, but eventually, one of Mavi’s further attacks stuck, and I just couldn’t quite close the gap. It was a long descent, and with the confidence I had, I knew I had a chance to bring it back. It was about maintaining that close gap and making sure I didn’t go too much into the red over the top of the climb.

“Having to defend a jersey with such a small gap, even if there were no bonus seconds at the finishes, makes you learn a lot about how to keep things under control. It wouldn’t have been possible without the help of every single team-mate who were here with me at the race. Everybody actually gave everything they had to make this result possible, and that was the most special feeling, and really gave me motivation to make sure we kept it until the very end.

“I can’t stress enough how much this was a team effort. The lucky thing about having to defend a jersey was the fact that I had enough jerseys to give one to each of them. I wrote a special note for each, about how they really made this week a success. I hope that shows them appreciation for all the sacrifices they have done.”