The most incredible story in sports in 2022: Annemiek van Vleuten is World Champion! 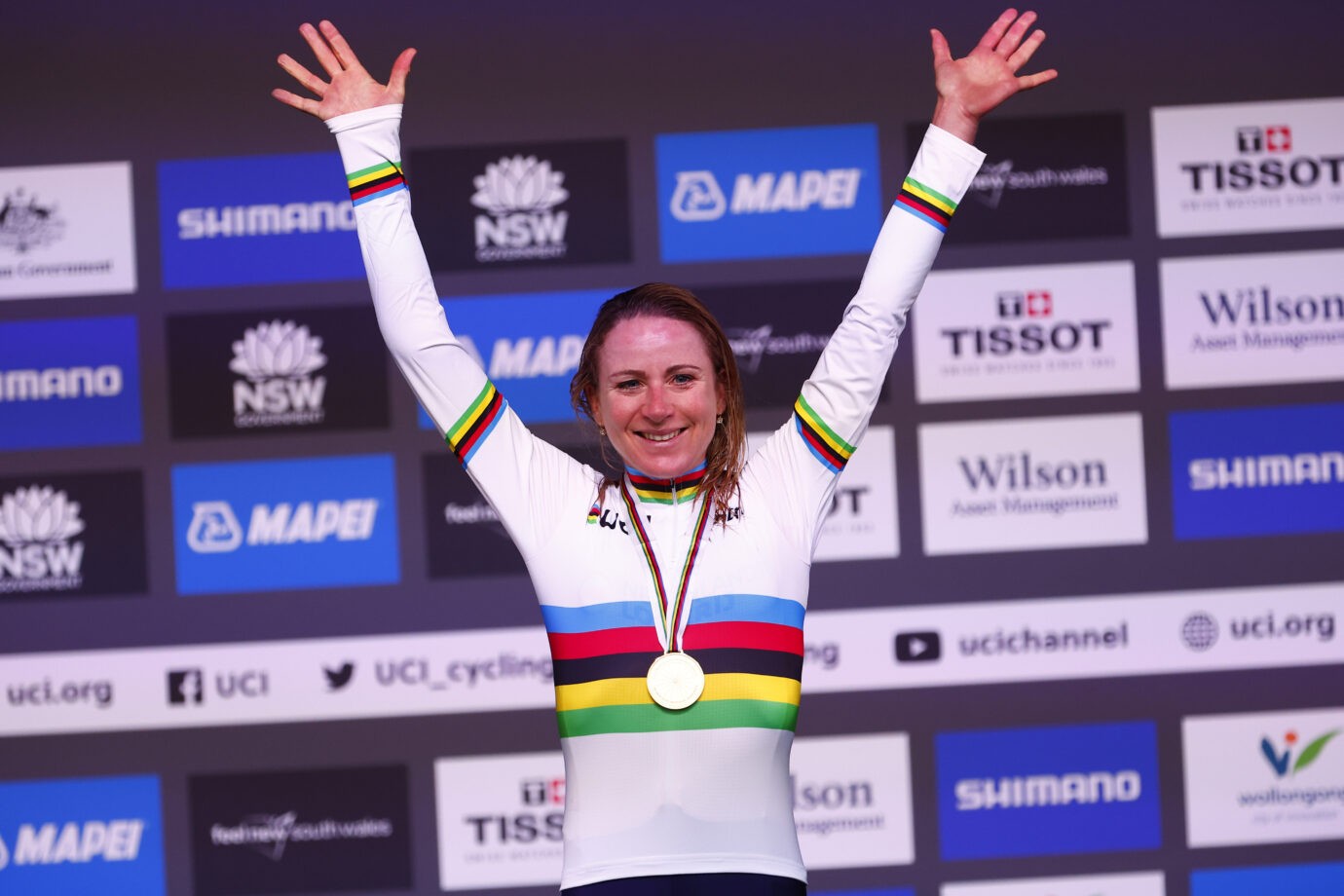 Dutchwoman wins against all odds after broken elbow on Wednesday; makes unexpected attack with 1km to go count in Wollongong to celebrate her fourth World title -second in the road race- and wear the rainbow bands with Movistar Team at farewell tour in 2023.

A day we will never forget. The same emotions that 30th September 2018 brought us came back on 24th September 2022, a morning (European time!) which will forever remain in the memory of the Movistar Team’s fans and roster. For the first time in our organisation’s history, and first for the women’s squad, one of our riders will wear the most beautiful jersey in the sport. And it couldn’t be other than the most brilliant rider in a generation„ and leader of the Blues, Annemiek van Vleuten.

With one kilometer remaining on the 164km course of the World Road Race Championships in Wollongong (Australia), after a really tough race for her due to her elbow fracture last Wednesday in the Mixed Relay TTT, ‘Miek’ launched the most unexpected attack from a selected group of favourites. Focused, due to her injury, on Marianne Vos’ chances, the fatigue to her team-mate’s legs took the Dutchwoman back into individual contention, with only one shot available. Just one thousand meters from the end, with the small peloton always behind her, but unable to bring her back. Lotte Kopecky (BEL / SDW) and Silvia Persico (ITA / VAL) would join the ecstatic new World Champion on the podium.

Van Vleuten, winner in the Worlds for the fourth time after her two ITT rainbow jerseys -Bergen (2017) and Innsbruck (2018)- and her only road race title to date, with a 105km breakaway in Yorkshire (2019), will thus wear the most coveted jumper in her farewell season, 2023, alongside a Movistar Team which can now enjoy the privilege of having hosted five World Chanmpions within its ranks: Annemiek, Indurain (1995, ITT), Olano (1998, ITT), Costa (2013) and ‘Bala’. Our squad continues to make history!

“I cannot believe it. I was waiting for the moment when they told me it’s not true. I was working for Marianne! And then, at some point in the finale, I found myself with the pursuit group, and she was not coming back — so OK, I knew I couldn’t sprint with my fractured elbow, and thought I should maybe wait for the moment, and seek a spot to attack. The only, only, only chance I had was there. I was waiting, waiting until they come for the sprint, but they didn’t catch me…!

“It was a hell with my elbow. I couldn’t go out of the saddle, my legs were exploding on the climb. Normally, I really like to go out of the saddle… I had to also follow a different plan from what I wanted today. I wanted to attack at Mount Keira before my elbow fracture, but with this situation, we established that Marianne was the leader, and I was playing domestique with my broken elbow — but now I’m world champion!

“Both titles will have a story. I thought I shouldn’t wear my earrings today with my injury, but then I thought: ‘They have still brought you luck after all many times!’ I wanted to ride like in Yorkshire; it wasn’t possible to attack from afar, because of the elbow, but it was still an incredible last kilometer.

“I’m super disappointed that I crashed and broke the elbow at the TTT, because I knew we had a chance there to wear the rainbow, compared to today. My first win wasn’t so enjoyable, with the pandemic in 2020, but this one, I will fully enjoy it!”