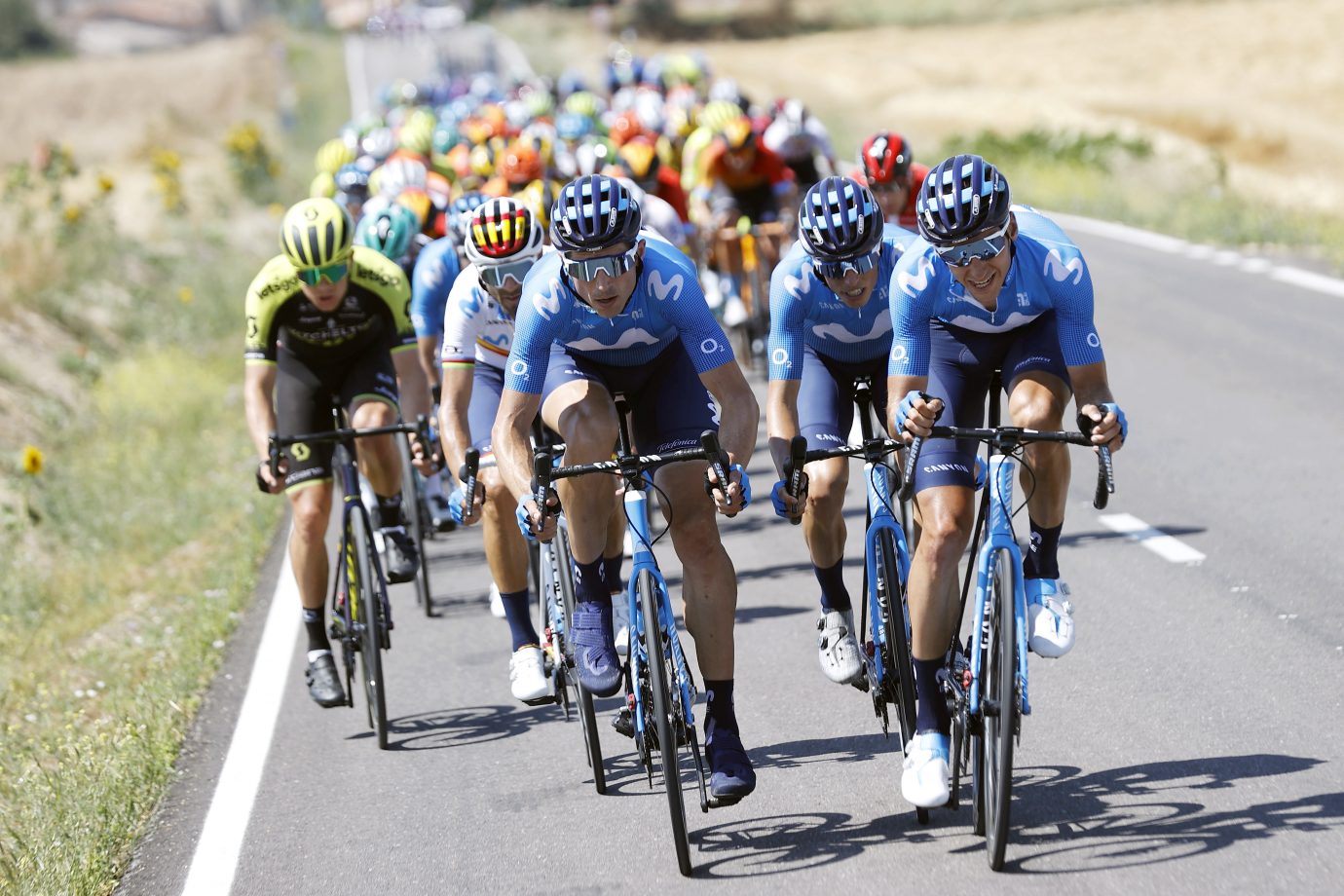 Supporting Valverde and Mas during the 2020 season.
Men's Team Vuelta a Burgos

Spanish champion from Movistar Team comes only behind Grosschartner (BOH), Almeida (DQT) in frantic opener, with echelons, crashes and plenty of fireworks following a five-month stop for men's pro cycling.

The first day of racing for the men’s Movistar Team since March 1st was a 157km route from the Catedral de Burgos to the Alto del Castillo, with two climbs preceded by the Altotero (Cat-1) halfway through the course. With just over 1km at 6% average gradient and some cobblestones, it was certain to be a demanding finish for all riders..

Some clouds were covering the sky at an otherwise pleasant Tuesday, with a maximum 25ºC, yet with strong northeasterly winds (near 30kph) that made for a difficult approach to the last circuit, as it blew on the riders’ back and side in that section.

Alejandro Valverde: “First thing I want to say is that I’m so, so happy to be back after this long stop. It gives you goosebumps to be racing again and having these crowds behaving well, following all guidelines, over today’s course. A reason for so much fireworks today? I think it’s been a mix of many reasons. Everyone was raring to go, and that might have made for more aggressive racing, but the roads, the hills, the wind – there were many other factors to favour it. It was fast racing, even with those short crosswinds.

“I’m happy with that 3rd place, seems like we’re where we wanted to be. It wasn’t a bad finish for me, but considering all strong sprinters that were taking the start, I knew it would be hard for me. In the end, it was a small group at the top of the first Castillo ascent, with many attacks leading up to that climb, and it made it easier for me to go for a result and take third. Everyone was looking to each other when Grossschartner attacked -I was on Evenepoel’s wheel in that precise moment-, but I think it was down to his own strength, we were cautious about following him and running out of gas. As I said, I’m satisfied with this.

“Tomorrow it’ll be all about staying away from crashes -it’s a flat stage, for sprinters; we’ll see if the wind plays a factor tomorrow, seems it won’t be too gusty- and then it’s on to Thursday’s climb.”

The top sprinters and their teams will have a better shot, the first real one this week, at Villadiego on Wednesday (168km, stage two). The GC contenders will try to avoid any troubles before Thursday’s first big mountain finish atop the Picón Blanco.