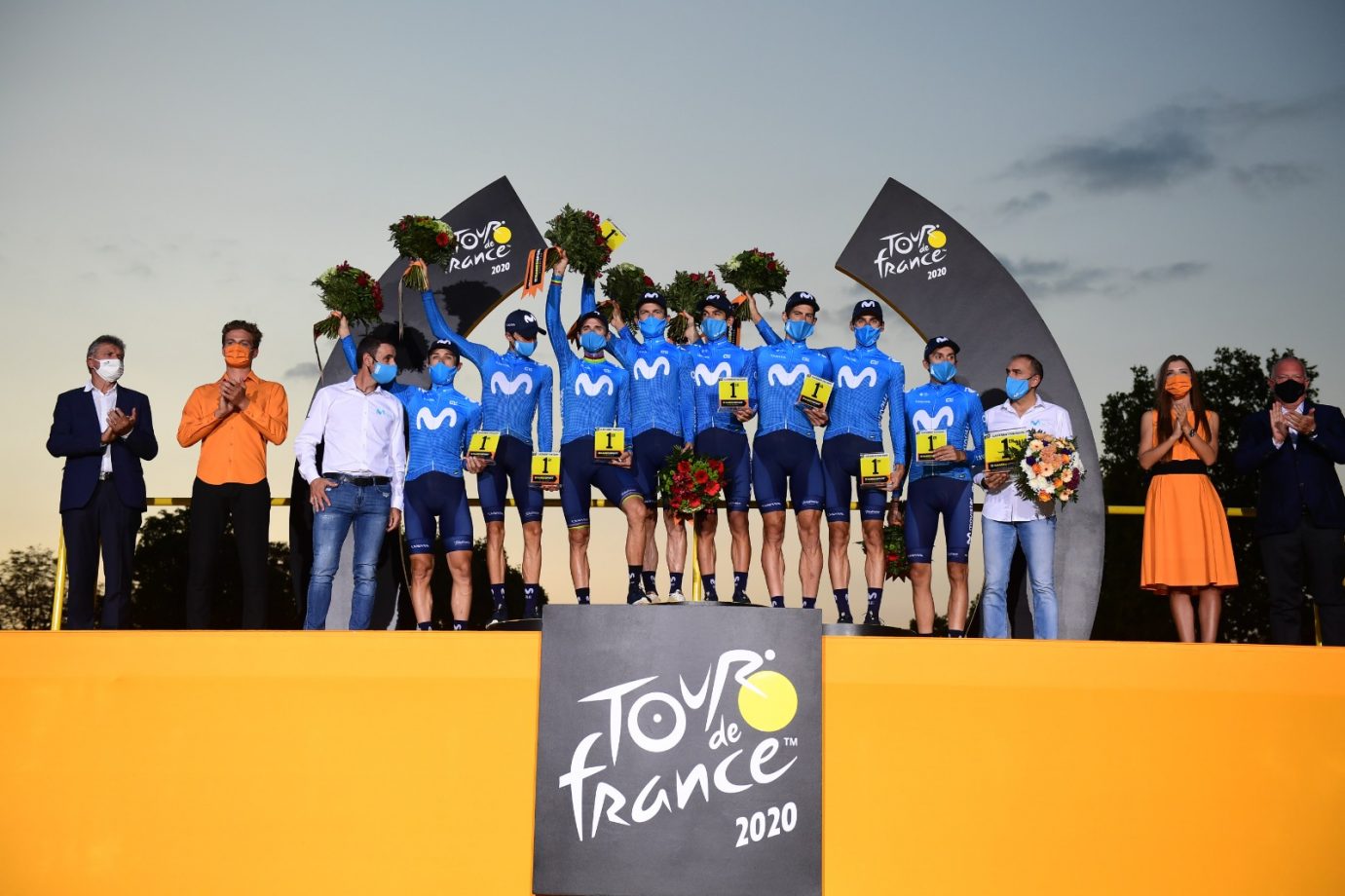 The 107th edition of the Tour de France, the one taking the biggest efforts from the whole world of cycling to be carried out after the deepest health crisis in a century, got to Paris on Sunday as 21-year-old Tadej Pogacar (UAD) confirmed his overall victory, followed by a performance for the ages in the TT showdown up La Planche des Belles Filles, where he defeated fellow countryman Primoz Roglic (TJV) for the coveted final yellow jersey.

The Movistar Team reached once again the most famous avenue in the sport, in its 38th appearance in the race, with the satisfaction of fulfilling the goals initially outlined, making sense of the big renovation process which the Blues started in this 2020 season. Enric Mas brilliantly tackled the challenge of leading the Telefónica-backed squad and obtained a 5th place overall after an enormous progression throughout the Tour, entering a top-ten almost made by Alejandro Valverde, 12th in his thirteenth appearance in the ‘Grande Boucle’.

The squad managed by Eusebio Unzué also achieved a third consecutive appearance on the final podium in Paris as winners of the team GC, their seventh victory (all-time record) in a competition which rewards the enormous efforts and teamwork by Oliveira, Rojas, Cataldo, Erviti, Soler (21st) or Carlos Verona (19th), one of the Tour’s most improved riders and a perfect example of the Blues’ big leap over the past three weeks.

“We probably didn’t get as well prepared as other teams to the restart of the season, since we understood it had to be at Burgos and Dauphiné where we gained that final form heading into the two big goals for the team in this ‘new season’, which were the Tour and La Vuelta. There’s no doubt that we weren’t at the required form there, but the particularities of such a strange season made us perform that way.

“At the Tour, we were where we hoped to be from a from standpoint. We came here with an aim of consolidating the changes the team has undergone, with Marc and Enric taking on more responsibilities, and seeing how they could do in the Tour with freedom and a leading role. The result is really satisfactory: other than that team GC, we witnessed the confirmation of Enric as a man for this race, with a very consistent Tour, improving his form over the three weeks of racing and finishing with a brilliant time trial, which makes face the immediate future and the long term more confident about our chances.

“In Marc‘s case, it’s true that having changed his program later during his preparations, thinking about how difficult the situation was becoming to properly hold the Giro d’Italia -which eventually seems will take place with no problems-, could affect him and prevent him from being as regular as he’s been in the past. However, he left good performances in 4-5 stages and it makes us confident about what he can do in the future.

“Carlos Verona has taken a big leap forward in all respects; Imanol, who was coming into this Tour with very few racing days after his February injury, unable to compete before the pandemic, has improved really much during the race, and ended up bring a crucial man for our team again. The same goes for Nelson, Rojillas -who, unfortunately, suffered too much with crashes and couldn’t be as much of an asset as he’s always been- or Dario Cataldo, who has completed a decent TDF. All of them, under guidance from Alejandro, who has been really important to make Enric company in the key moments of the race, as Enric has confirmed (and thanked him for) as a crucial element to consolidate his progression over this Tour.

“Other than that, regarding the race contention itself, I must say that, for a big portion of the Tour, Pogacar was the biggest favourite for me. If you keep aside that big surprise in the TT and all things he had already shown -his final days in the 2010 Vuelta; the things he had won, and the way he won, in 2020-, he’s been the strongest attacker in the mountains, as he already showed in Loudenvielle, the first to create significant gaps. He’s been consisistent all race and played well that only card, the mountain TT, leaving the control of the field in the hands of Jumbo, who still did a splendid job. This generation, with Bernal and him, as well as Evenepoel, Kämna, Hirschi – they are the present and future of cycling now.”