Mas continues to improve atop Orcières-Merlette 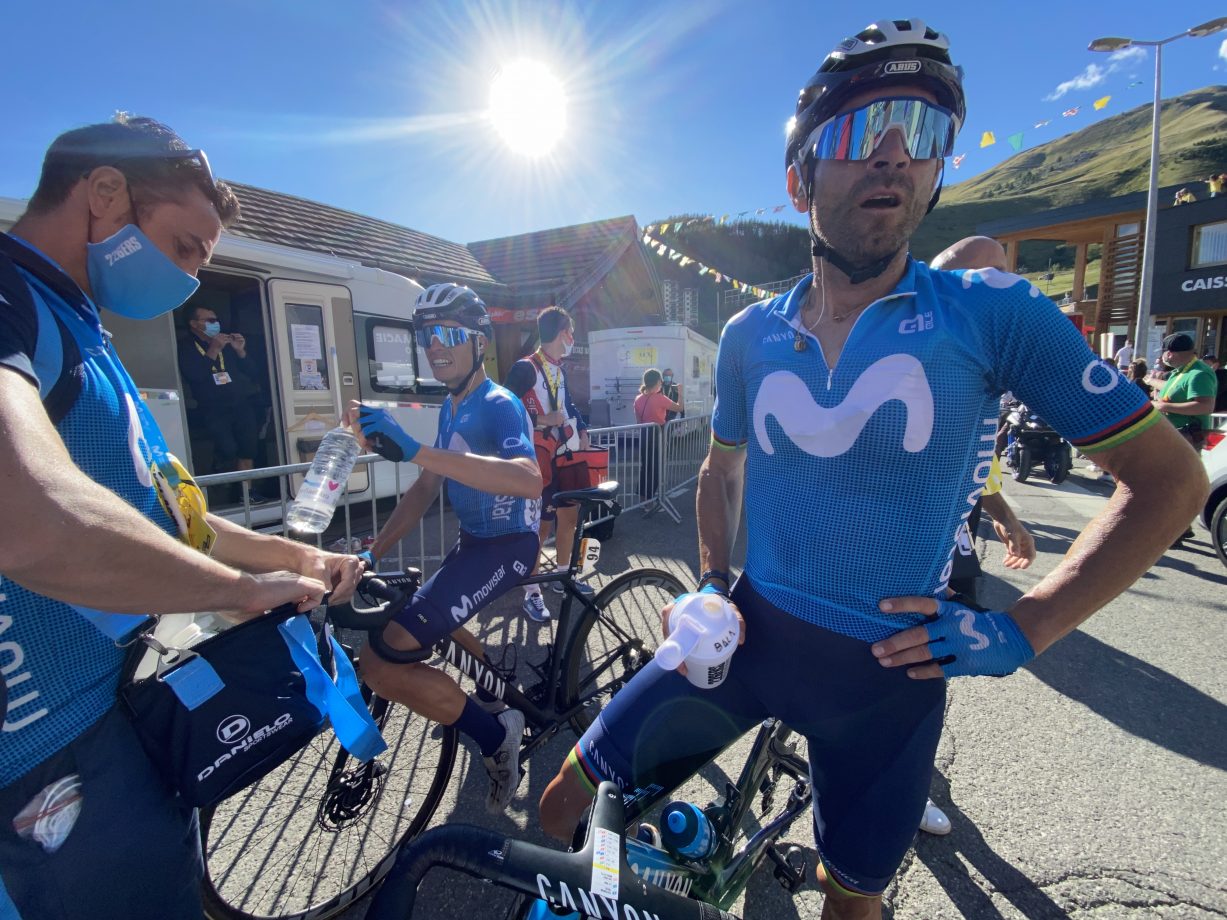 Spaniard just 9" away -with Valverde 21" down- from reduced GC group as Roglic (TJV) wins stage four. Jacobs (KOM leader), Movistar Team (6th at TTT) off to fine start in Italy.

Five categorized climbs -even if four of which were Cat-3- and the first mountain-top finish of this year’s ‘Grande Boucle’: Orcières-Merlette, a Cat-1 ascent of nearly seven kilometers and steady, yet not too steep, average ramps of 6.7%.

With almost zero wind and maximum temperatures never higher than 22ºC, the riders didn’t have to contend with difficult conditions, the rain giving some respite after a rough start. The first mountain finish of the race would be held over dry roads.

Alejandro Valverde: “We’re still in the early stages of the Tour and everyone is still pretty fresh. There are teams with great strength which put on a pace that makes impossible for attacks to gain an advantage – if you try a move, you come back to the group with less energy. I think we did well, considering how we tackled this Tour. Enric just lost those little nine seconds and I was able to finish close, 20″ down – the feel after the stage is that we’re doing better and better. People must keep in mind that the Tour is only starting. We already saw during the Dauphiné how things changed from the start to the final stage, with many surprises. The same could happen in the Tour.”

Marc Soler: “Well, it seems like both Enric and Alejandro have been able to finish close to the top contenders, so we’re steadily improving. Surely we will get better in the next few days. We have to keep in mind that this Tour has just started, and with all mountains left, especially in the Alps – it’s going to be really hard.

“The whole stage today was really fast – even if the breakaway went from the bang and it was just six riders, the pace was high, even with the headwind. The bunch never stopped pulling, and the last climb was so fast. Jumbo-Visma proved again to be the clear patrons of this race, just like in Dauphiné. We can only hope they lose some energy heading into the final week, so the situation changes.

“I’m happy with my legs, I’m gaining some form. It’s taking its time, but we must keep in mind that I’m a month ‘late’, because my initial plans were to ride the Giro and I’m here in the Tour. I hope to be up there with my team-mates in the final part of the Tour, and we hope to do better. We rely on Enric – he’s proven to be a great talent and we feel he can be up there, especially in the second part of the race.”

The sprinters will be back at the fore of the race on Wednesday’s stage five of the Tour, finishing in Privas after 183km that include only two Cat-4 ascents. The final climb will be just 16 kilometers away from the finish, though.

Tuesday also marked the start of a long alternate ‘tournée’ for the men’s Movistar Team in Italy, with the opening double sector of the Settimana Coppi e Bartali (2.1). A 98km road race in the morning -with three climbs of the ‘Muro di Longiano- was followed by a 13km team time trial in the afternoon.

At the morning sector -where Olav Kooij (TJV) notched up the bunch sprint victory-, Johan Jacobs was the main protagonist with a solo break rewarded with the KOM jersey (maximum points through all three Longiano climbs). The Swiss rider was caught with 15km to go.

At the TTT, Jacobs and team-mates Mora, Elosegui, Rubio, Roelandts and Arcas clocked a respectable 6th place (14’50”, upwards of 53 kph avg.), 18″ behind winners Deceuninck – QuickStep. Wednesday’s stage two will finish with a demanding circuit in Sogliano al Rubicone, over five ascents to the ‘GPM’ of Cioca (3.6km @ 6%).