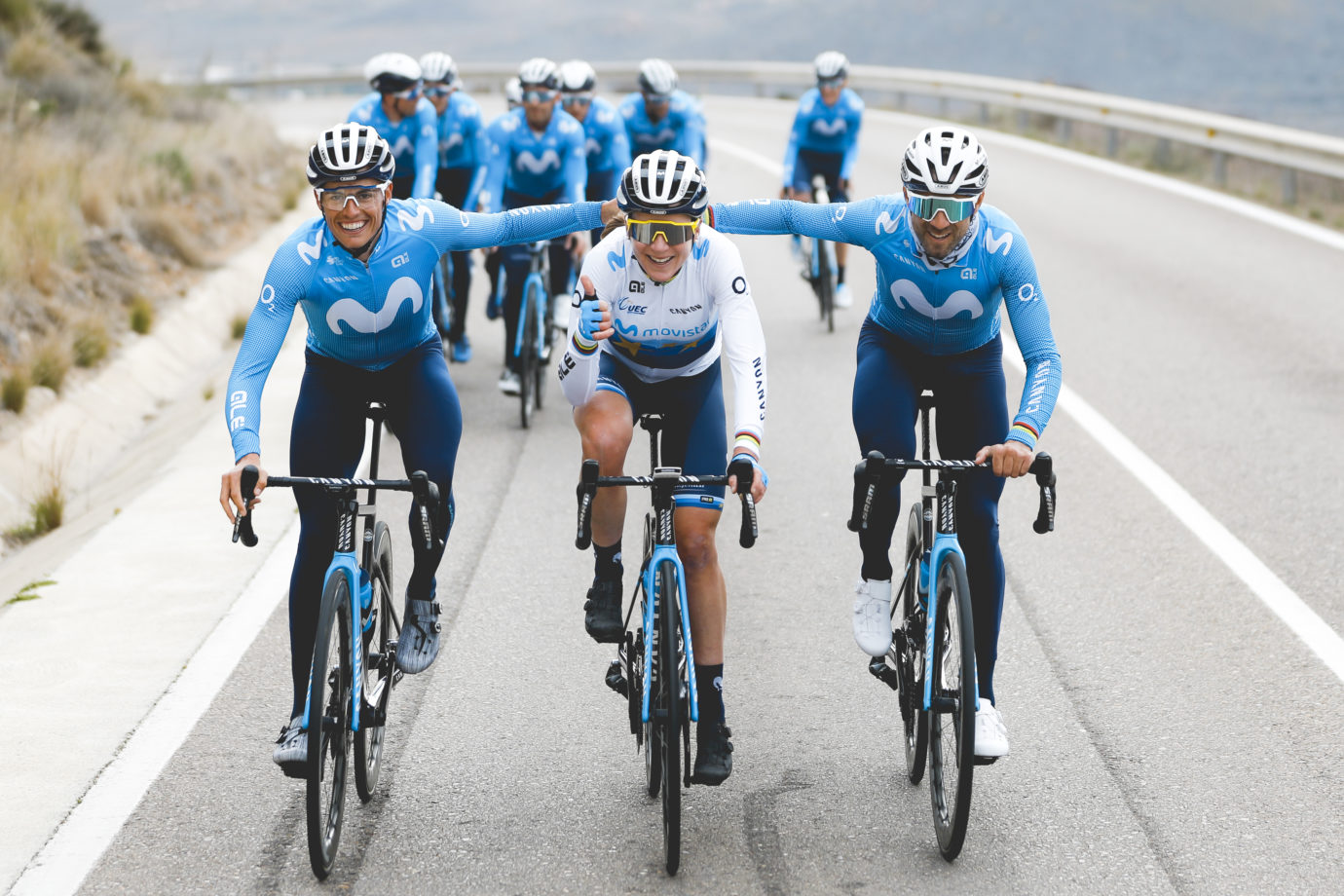 Virtual event, held between Madrid and Almería, sees Telefónica-backed squad present its longest roster yet - 43 members between its women's and men's programs - as tributes are paid to the press, great supporter of the Blues' activities in the hardest year for sports.

The Movistar Team held on Thursday the launch of its 2021 season, the 42nd consecutive year for the longest-standing, most famous squad in the international peloton, as a fully-digital event. Connecting with both the studios of their sponsor’s TV station Movistar+ in Madrid and the training camp held for the past two weeks in Almería, the 43 women and men forming the Telefónica-backed squad officially kicked off a season which is scheduled to start in February.

Telefónica, main sponsor of the Abarca Sports organisation’s teams for the last eleven years and big supporter of sports and culture in Spain, gave full backing to the event with an appearance from José María Álvarez Pallete, CEO for the company: “The Movistar Team is much more than a cycling team for Telefónica. It represents not only our values of teamwork, overcoming difficulties, but has also turned into an icon when it comes to equality in sports, and yet another proof of our commitment with sustainable development and our support to sports in Spain. To us, the Movistar Team feels like a display of everything that we can do when we’ve connected.”

Eusebio Unzué underlined that “it is a privilege for us to keep enjoying Telefónica’s support after all these years, and especially following such a difficult 2020 season, where we felt their support more than ever at moments really challenging for sports in general. We want to keep paying them back for their confidence as we continue working on the big changes this group will be following over the upcoming years – which we hope will lead us to great success alongside this brand.”

At the event, both the team and the sponsor thanked the press for their work as a vehicle to communicate on the efforts of cycling, together with social media, during a 2020 season significantly harder for all sports.

The event helped the team present to the big public the new faces of a quite reinforced roster for 2021. Amongst the additions shone Dutchwoman Annemiek van Vleuten, current European road race champion, whose world titles and victories in all different and prestigious races have turned into the best rider in the women’s peloton for the past few years. Her arrival, together with the signings of American allrounder Leah Thomas and up-and-coming talents Sara Martín and Emma Norsgaard, is a great boost of confidence for the squad led by Sebastián Unzué, Pablo Lastras and Jorge Sanz. 14 riders are part of the women’s program, a member of the UCI Women’s WorldTour, the top tier in the sport, for the second year running.

At the men’s team, five riders are new for the 2021 roster. Two talented riders for all terrains, Gonzalo Serrano (ESP) and Gregor Mühlberger (AUT); young hopeful Abner González, the first ever WorldTour rider from Puerto Rico and first Blue member born in the 2000s; Iván García Cortina, Spain’s best asset for the cobbled classics; and Miguel Ángel López (COL), podium finisher in both the Giro and La Vuelta and one of the world’s best climbers, reinforce a lineup which still includes two of the most respected Spanish riders, Marc Soler and Enric Mas, plus Alejandro Valverde, who will reach the age of 41 on his bike for a legendary, two-decade career.

The event also featured two other big headlines. ‘The Least Expected Day’, a documentary series depicting the ins and outs of professional cycling with unprecedented transparency and realism, will see its Season 2, focused on the Movistar Team’s 2020 season, aired this spring. On the other hand, the Telefónica-backed outfit announced the imminent launch of the Movistar Team Challenge, a virtual cycling initiative in collaboration with Global Cycling Network and Zwift which will span the next month and a half, and make possible for ten riders -five women, five men- to become the first ever to defend the Blue colours at the Zwift Racing League, the world’s biggest esports cycling event.