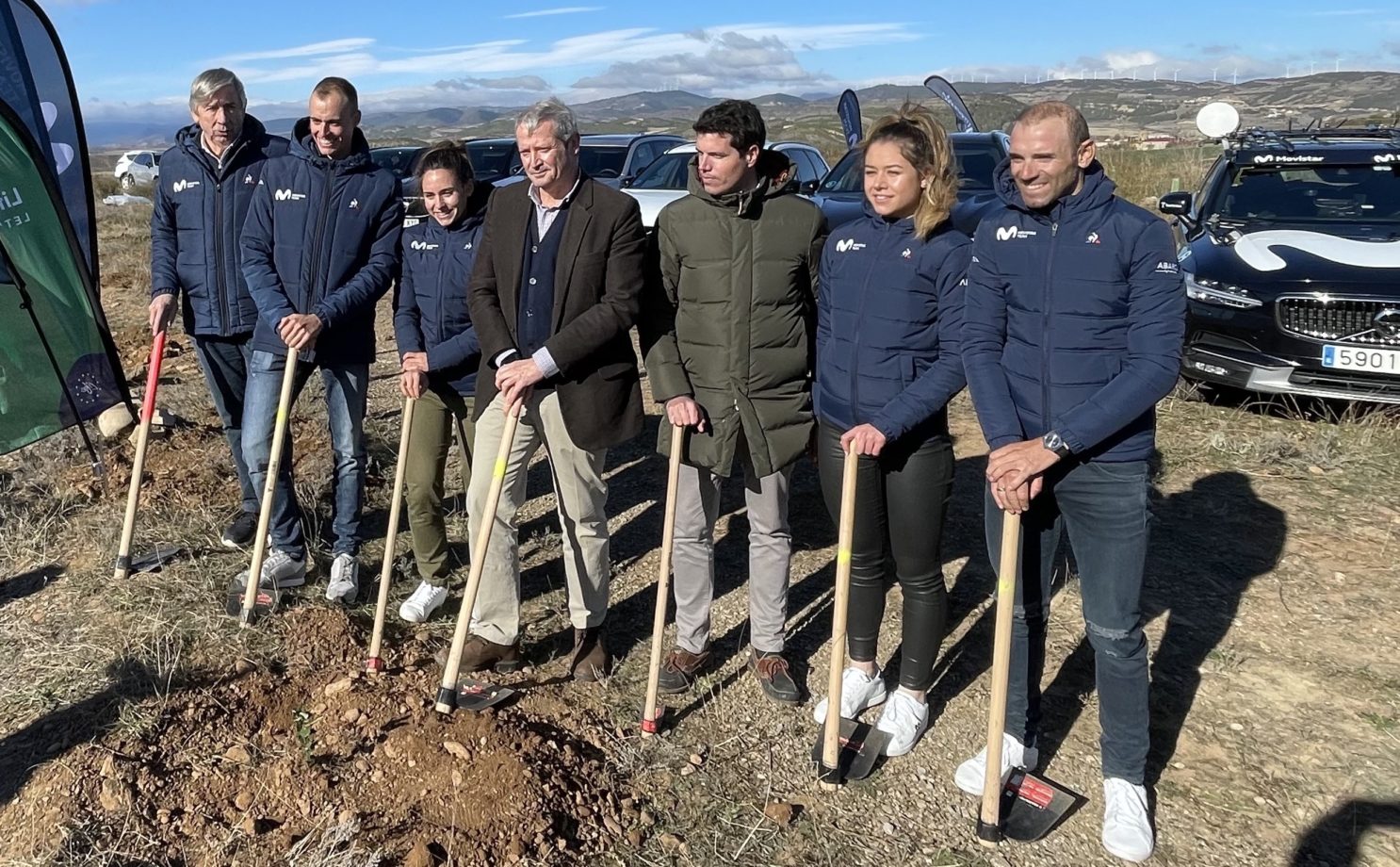 Part of their Sustainability Plan

Committed, since 2020, to leaving behind a planet greener that the one they’re carrying their professional activity out at, the Movistar Team held in Sangüesa (Navarra, northern Spain) an event which they look forward to reaffirming their intentions with. The Telefónica-backed squad will plant 1,000 trees in the area, with a small portion of the seedlings sowed today in the presence of general manager Eusebio Unzué and top riders from the Blue outfit: Alejandro Valverde, Enric Mas, Lourdes Oyarbide and Sara Martín.

At a previously abandoned terrain, next to the road connecting Sangüesa with the nearby town of Sos del Rey Católico and over 1 ha (2.5 acres) of terrain, species of species as diverse as holm oak, walnut, phoenicean juniper or turpentine tree will be planted. Those arboles, agreed upon with regional and local authorities, are intended to increase the ecosystems’ resilience and biodiversity.

It is estimated that the project will sequestrate around 200 tonnes of equivalent carbon dioxide (CO2) over the next 40 years. That would allow the Movistar Team offsetting, and actually turning into a positive impact, the activities carried out during their last pre-pandemic season, 2019, where the first calculation of their carbon footprint was recognised by Spain’s Ministry for Ecological Transition, with 176 tCO2e.

Contributors to the project include, other than Abarca Sports -the society under which the Telefónica-backed
squad develops its activities-, three other actors, Those are Forestmatic, a greentech startup connecting brands
and businesses with verified, tree-planting projects, through a data-rich platform capable of tracking every single
tree; Life Terra, an EU supported foundation with a mission to restore our connection with the Earth and to
enable people to take impactful climate action now; and Volvo Cars España, official sponsor and car provider of the Movistar Team, whose sustainable mobility solutions have supported the day’s event. A special mention goes to the Regional Government of Navarra, with their LIFE-IP NAdapta-CC Project, and the City Council of Sangüesa for making this happen.

Other than contributions from the team itself, a portion of the expenses for this initiative have been paid through charity auctions the squad launched during the second half of the 2021 season. The most relevant, which took place during Paris-Roubaix, collected nearly €9,000 with signed jerseys of both the women’s and men’s teams at the famous one-day classic in France.