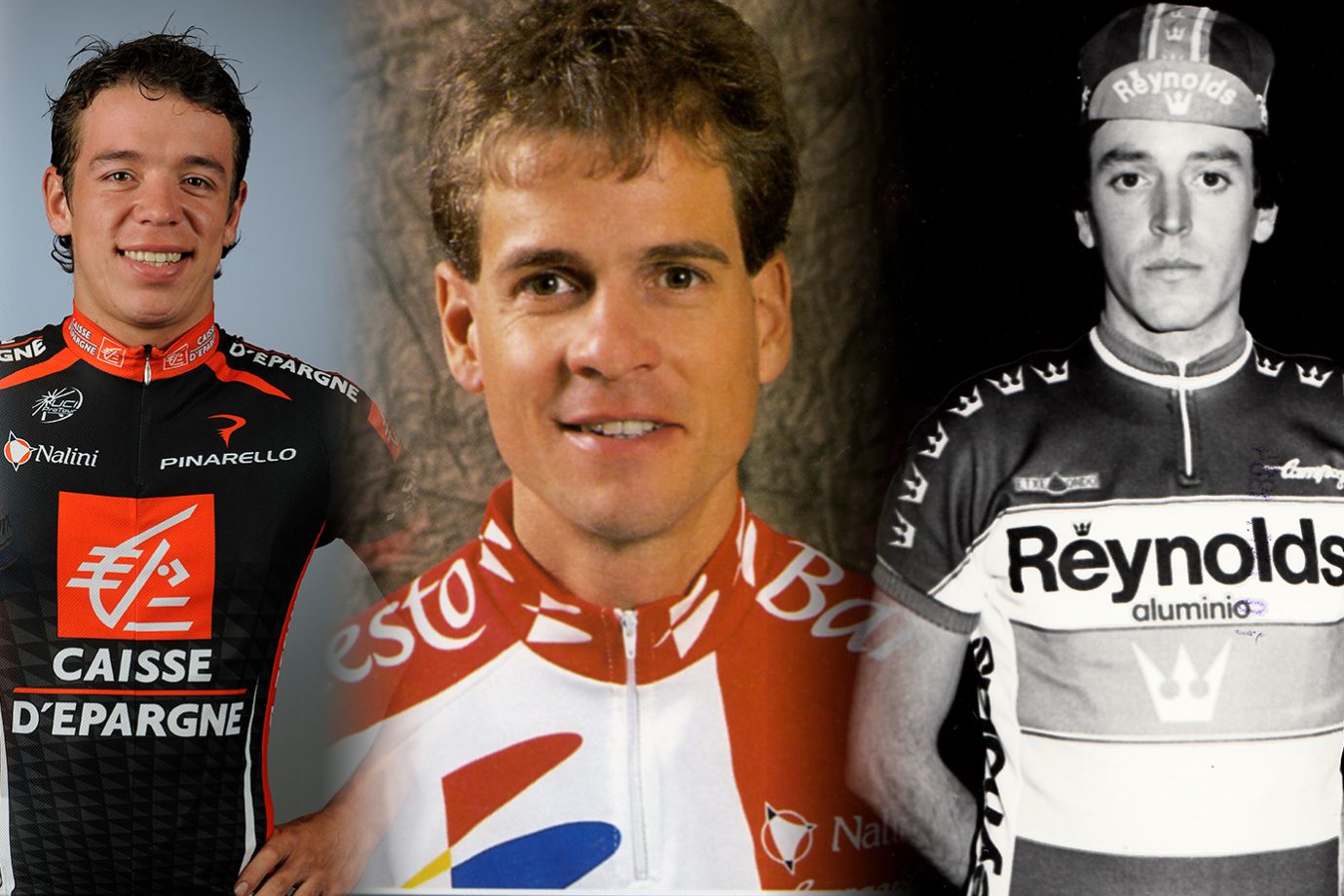 This feature is a compiled Twitter thread containing 15 names, stars or domestiques, who make part of the 200+ rider roster the Movistar Team has ammassed since its inception in 1980 - and you might not even know they rode for us!

— All riders who have been part of the Movistar Team are into our website’s History area.

Ángel Casero (1994-97)
The Valencia native, winner of La Vuelta in 2001, was a member of the Banesto squad in his first four years as a pro. And he got some great results to propel his hopes: the Tour de l’Avenir (1994), the Vuelta a Castilla y León or the Clásica de los Puertos were soon into his palmarès.

Melcior Mauri (1987-89 + 94)
Overall victor in the 1991 La Vuelta, he cut his teeth at Reynolds for three years in the 1980s, before coming back to Banesto in 1994 to claim wins in Murcia, Castilla y León, Aragón or Amorebieta. He would later go on to take silver medal in the 1998 ITT World Championships, only behind team member Abraham Olano.

Andrew Hampsten (1995)
The only American to be part of the Abarca organisation before Matteo Jorgenson, he joined the organisation in the twilight of his career as a luxury domestique for Miguel Indurain. He won the Giro d’Italia in 1988, as well as top-ranked stageraces like the Tours de Romandie or Suisse.

2. THEIR NAME RINGS A BELL – FROM OTHER TEAMS

Herminio and Pedro Díaz Zabala (1987-88)
The two Cantabrians made a name for themselves at ONCE, following two seasons within the ranks of Echávarri and Unzué. In Herminio’s case, the 1991 Tirreno-Adriatico overall winner built a strong career as sports director alongside Manolo Saiz, and stayed behind the wheel for amateur outfit Aldro until not long ago.

Jeremy Hunt (1996-99)
He’s been a pro racer until not too far ago: he hung up his bike in 2012, as a Team Sky rider. His pro debut was with us, though: wearing the Banesto jersey, he claimed stage wins in Aragón, L’Avenir, Mallorca, La Rioja, Getxo – and even collected a beautiful British national champion jersey!

Cândido Barbosa (1998-01)
An irreplaceable figure of Portuguese cycling, with 25 stage victories (2nd most winning rider) and three overall podiums in the Volta a Portugal, despite being initially considered a sprinter, he won with Banesto at La Rioja, Algarve, Portugal – and even finished a Giro d’Italia in 2001.

Eduardo González Salvador (1984-85)
He was a rider for the pro Reynolds outfit for two years, and three decades later, he came back to Eusebio Unzué’s organisation as a prestigious doctor. He’s been working for Abarca’s performance staff for nearly a decade now.

José Luis Jaimerena (1983)
That’s right – our lovely sports director, ‘Jaime’, got to race with Reynolds as a pro, in the same year we made our Tour de France debut. After that came a sports director career spanning more than 30 years – and he hasn’t grown a wrinkle ever since!

Patxi Vila (2001-02)
Everyone remembers him wearing a Lampre or De Rosa jersey, yet Patxi’s professional debut happened at the team led by José Miguel Echávarri and Eusebio Unzué. Now, nearly two decades after his only pro experience in Spanish teams, he’s got back to the Abarca ship in 2020 as Head of Performance, a vital member of the team’s sporting organisation.

Kari Myyryläinen (1986-88)
A Finnish rider for a Spanish team! The Nordic cyclo-cross specialist rode for the Reynolds team for three years, even getting to winning a stage in the Vuelta a Burgos and another one in the Tour de l’Avenir in 1987.

Gert Frank (1980)
The only Dane to join our team before Mathias Norsgaard, Frank was part of the first Reynolds roster, forty years ago. His prestige, however, wasn’t gained on the road rather than the track, a renowned specialist in six-day events.

Erwin Nijboer (1994-96)
Just one Dutchman has ridden for Abarca Sports’ teams in 40 years of existence. Always linked to Spanish cycling (he rode for Seat-Orbea, Caja Rural or Artiach) and a stage winner in La Vuelta, he completed his professional career with the Banesto squad.

Juan Antonio Flecha (2002-03)
He rode for iBanesto.com for two years, and gifted us a stage in no less than the Tour de France. From there, the Argentinian-born Catalan went on to the podium of ‘De Ronde’ and Roubaix, and won the prestigious Omloop Het Nieuwsblad and the Züri Metzgete. Top class.

Rigoberto Urán (2008-10)
A pioneer and key member of Colombian cycling’s most glorious era, he was a member of the Caisse d’Épargne team for three years before becoming a household name with his Giro and Tour podiums – not to forget his undeniable geniality.

Vasil Kiryienka (2009-12)
Retired just months ago due to a heart issue, he left his mark during a four-year membership, winning in the Giro d’Italia, the Vuelta al País Vasco or the Route du Sud. A true powerhouse.