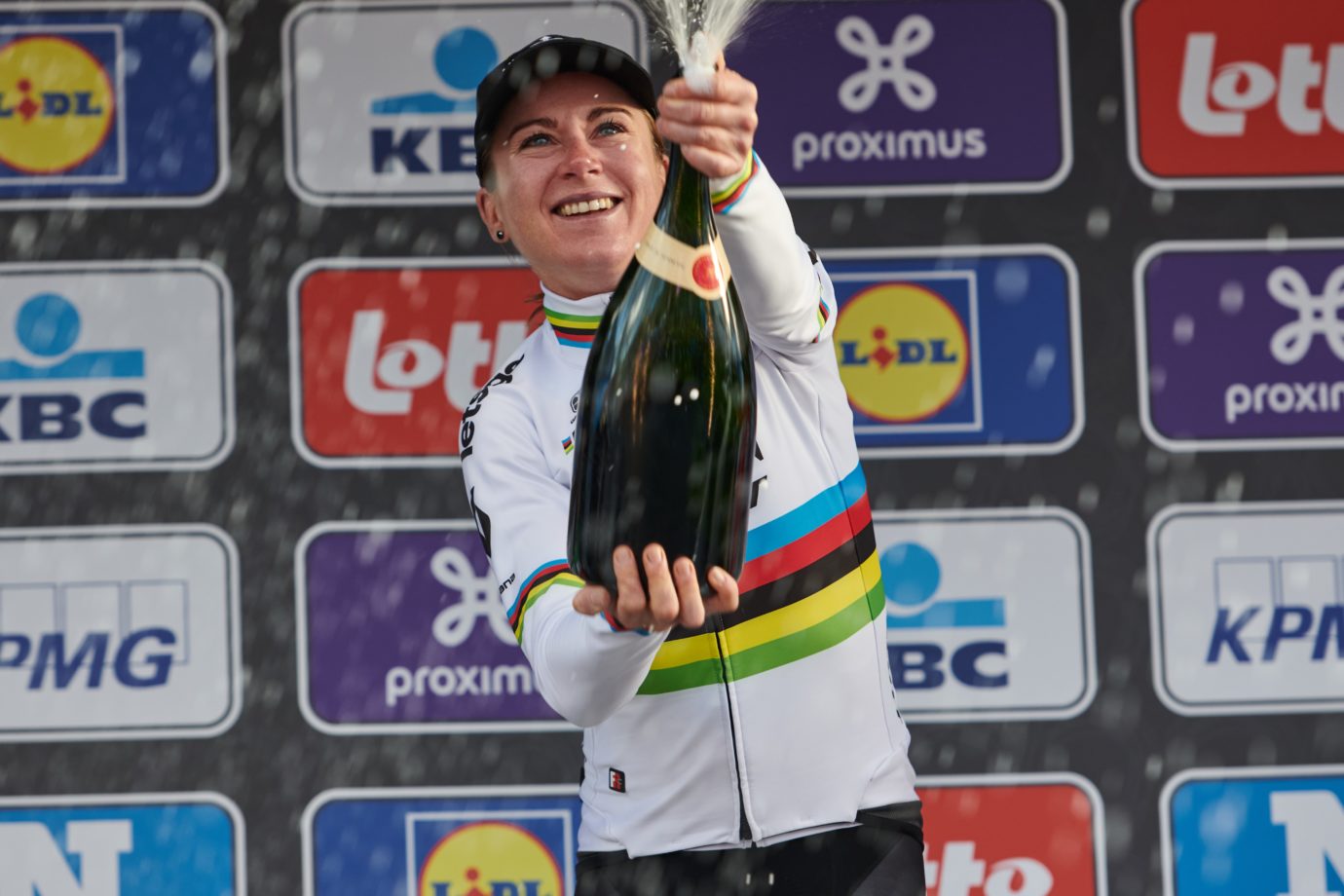 The Movistar Team is extremely proud to announce Monday that Annemiek van Vleuten (Wageningen, NED; 1982), the reigning World Road Race Champion, has signed a contract for the next two seasons (2021-22) with the Spanish women’s outfit led by Sebastián Unzué.

With Van Vleuten’s signing, the squad sponsored by Telefónica takes a decisive step forward in its goal to become a reference in the UCI Women’s WorldTour peloton, with the same ambition they’ve displayed for the past decades as a men’s team. The Dutchwoman, who conquered the rainbow jersey in Yorkshire last year with a solo attack of more than 100km and also claimed the ITT world title in 2017 and 2018 -she also won the European Championships’ road race in Plouay last Thursday-, has dominated several of the most prestigious international events in the past few years.

Back-to-back GC victories with her current team, Mitchelton-Scott, at the Giro Rosa (2018-19), the longest, most demanding stagerace in the calendar; a solo win in the 2019 Liège-Bastogne-Liège; four ITT national titles and one Dutch road race championship; the 2011 Ronde van Vlaanderen; and two wins in La Course by Le TDF (2017-18) are some other triumphs in Van Vleuten’s endless palmares, with more than 70 UCI victories. A rider able to dominate in the mountains, own the time trials and show her commitment and strength over all different kinds of one-day races.

AUDIO / VAN VLEUTEN ON HER SIGNING:

— Annemiek van Vleuten: “My history with the Movistar Team goes back to many years ago. I got to know the team better as I shared training rides with them during my altitude camps in Sierra Nevada (Spain), back in 2014. I really liked the experience; it felt like a ‘Spanish family’ for me, I felt really welcomed by them as they were the first professional men’s team that invited me to join them in endurance training. The atmosphere with them was so relaxing: no stress on the training, waiting for me after the climbs, and also every evening, staying together after dinner, even playing table tennis with Alejandro Valverde! (laughs)

“With regards to the women’s team, it feels the same – I look at them like a great group of girls, with the same culture as what I saw in Sierra Nevada. It’s a project that attracts me, as much as I’m looking forward to working with head of performance Patxi Vila. I’m really looking forward to improve together with the whole team, and enthusiastic about what lies ahead with them. I hope they can help me becoming even faster, also on the TT bike, in combination with Canyon, which looks like a high-end bike to me.

“I’m not the youngest in the team anymore, but I’m super ambitious, and want to perform well for this team. I’m not thinking about the end of my career yet – I’m thinking about how to improve. I hope joining this team, this new environment, can help me find new energy. Other than performance, I see this as an opportunity to join a group full of great talents, young girls that, after these three years of growth for the project, can benefit from those small things, advices, that a rider like me can possibly give them to take the next step. I like to work with young athletes, and helping them and supporting Spanish cycling really is a goal for me as I join this team.

“For sure I’d like to win races with the team, but I’m not a person that wants to chase every race for herself. The feeling that comes at a finish with seeing a team-mate winning after helping her out is priceless, even more than winning yourself. I hope we can also profit from everyone keeping an eye on me, so we can help team-mates go for the win.

“And when it comes to Latin culture: yes, I already feel like I have some Latino blood inside of me! I really feel at home when I go to southern Europe. The mentality of Spanish people, with good sense of humour, makes for an environment that helps you feel at home, and usually makes you ride stronger. It’s about working hard, but also having good fun. A happy cyclist performs better!

— Sebastián Unzué: “There is one Movistar Team before and one after Annemiek’s arrival, certainly. It’s been already three years of hard work from everyone involved in this project to set a solid, ambitious foundation, a team that aims at big goals, and her signing is a decisive boost to attain that objective. I want to thank Annemiek for the enthusiasm she’s shown for this team and the confidence she’s put on our project since day one.

“Annemiek is the ideal person to lead this project, one who depicts perfectly many of the sporting and human values this team has always wanted to instil amongst its members. I admire her work ethic, her consistency, her honesty, her team spirit, her commitment. Her mentality fits to perfection into the way this group has always worked, and for our entire roster, both riders and staff, her arrival will be a huge step forward for us. I’ve always believed that great riders grow up better when having great examples by their side, great leaders, and our young talents will enjoy the best reflection of what it’s needed to succeed, with Annemiek being, undoubtedly, the best rider in the world

“The approach of our team from a competitive standpoint in the next few years will drastically change with Annemiek’s signing. Her biggest sporting greatness is that she’s arguably the only rider who, in my opinion, can go for any race in the calendar with a real chance to win. It’s a great challenge for the team, and a big motivation. It makes us hope we can aim high and go for the win, or doing well, in the most relevant events of the season.“