Enric Mas back into TDF top-ten after Puy Mary; Soler (8th) back into the break 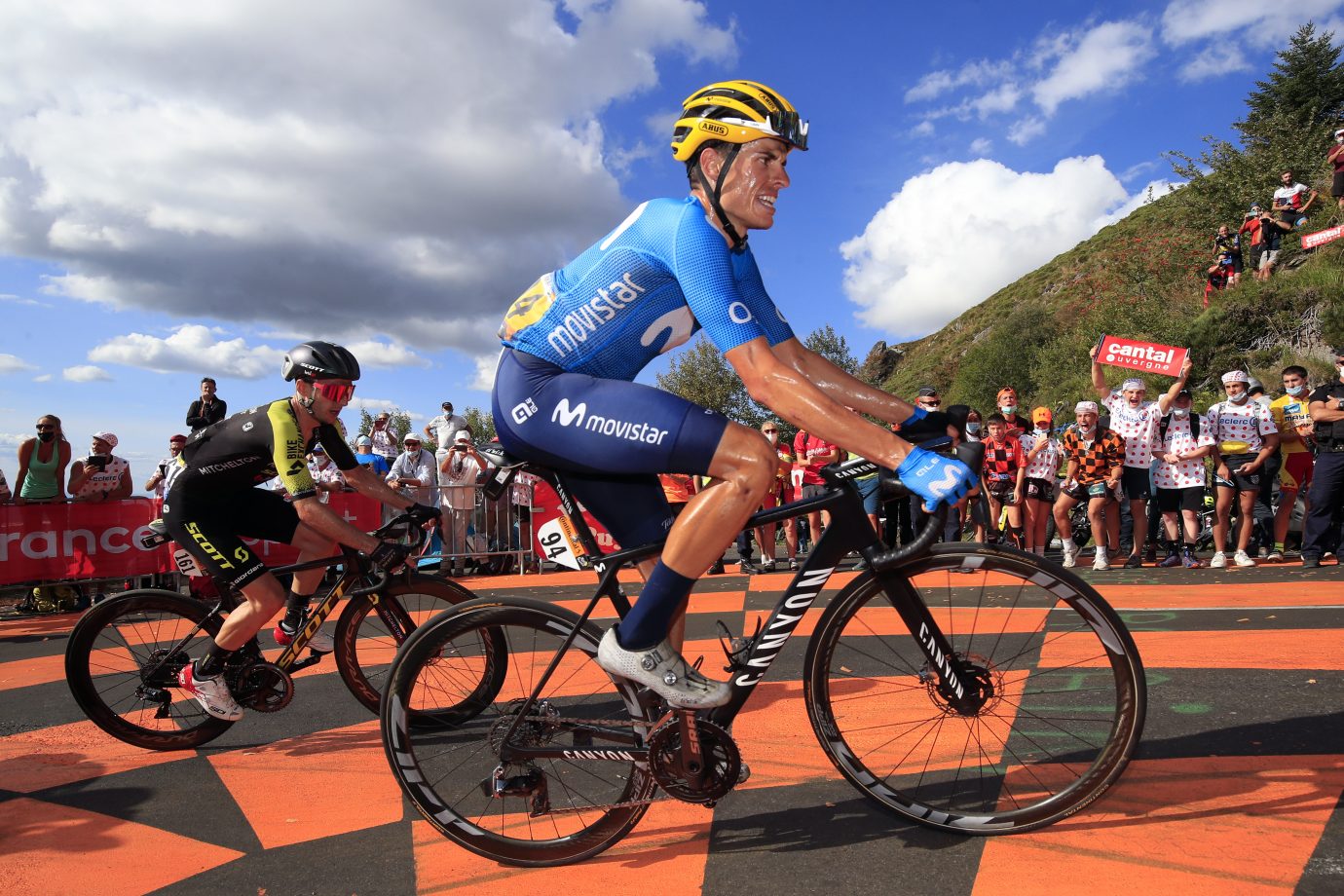 While not containing any HC climbs, stage 13 of the 2020 Tour could be, when it comes to its overall route one of the most demanding in this year’s race. Very few long sections where featured in the 191km journey from Chàtel-Guyon to the top of the Puy Mary (Cat-1; 5.4km @ 8.1%), after six other categorized climbs, almost from start to finish. The Col de Ceyssat (Cat-1), a long 10km right from the bang, and the steep slopes of Néronne (Cat-2 + Bonus; 3.8km @ 9.1%), right before the finishing climb, capped off a brutal day.

Even if some clouds were again present, the day was again pleasant, with no rain and temperatures ranging between 25ºC at the foot of the climbs and 16ºC at the top of the Puy Mary. Soft winds, from the north, on the riders’ back.

Marc Soler: “It was again one of those days when everyone wanted to go into the breakaway. I had to eat a lot of wind, yet not only near the finish; also to make it to the front. Imanol did a great job helping me out and getting me as close as possible to the early front group of five, and then I had to get back those, I think, 50 seconds I was losing before bridging back.

“There were lots of attacks into those final climbs, and the problem for me was that, while Deceuninck, Bora, Education First had 2-3 riders, I was navigating through this situation alone, and had to take on bigger responsibilities when it came to following the moves. It really takes its toll, because they divide the work between themselves when you have to pursuit a lone attacker, while I have to do it alone, and it shows at the end.

“First Schachmann attacked, and even if we tried to keep that gap stable, Deceuninck wasn’t setting a huge gap at the front of our group and the advantage was growing. I tried to attack, yet it was already impossible to get him back. In the ups and downs between climbs there wasn’t much cooperation, either, and you soon start suffering because of your efforts. The final slopes were really hard for me.”

Enric Mas: “Another difficult finish, after a day where we didn’t have much respite – maybe just that section when the bunch was riding a bit easier after the crash with Bardet and other GC names. Other than that little ‘stop’, the pace was brutally high all day, including the finish. I lost 55″, but I feel myself better and better every day, I think we’re improving a lot. There’s riders who are always up there, like the two Slovenians; some of them are losing some room – and that’s where we want to get in the mix. We’re just happy with what we already have; hopefully we can continue to improve until the very end of this Tour.

“Everyone in the team tries to keep me calm, especially Eusebio. They always tell me: ‘Whether you’re able to stay with the front guys or not, stay calm, go one step at a time, think about the future’. 2020 is a different season, there’s some strong guys ahead and we came here with an aim to progress towards the upcoming years. The team wants to me to get that experience, not thinking especifically about the leadership thing, rather than getting myself into Tour de France dynamics. Learn those climbs, routes, downhill sections that we’ll be facing in the upcoming years. Imanol, Rojas, all the veterans in the team have been like ‘teachers’ to me, they know everything, and that’s because they’ve racing at the Tour, Dauphiné and all big French events for many years. The experiences from this Tour will help me a lot in the future.

“It’s important to stay together as a team tomorrow, which will again be a demanding day, and then it’s on to Sunday, and my task to stay near the front. We continue to go day-by-day, not thinking already about Grand Colombier but about tomorrow, because every stage counts.”

Saturday’s stage 14 should be a day for the breakaway, though the sprinters could still hold a minimal chance. The 194km route between the cities of Clermont-Ferrand and Lyon includes the Col du Béal (Cat-2) and the Côte de Courreau (Cat-3) in the first half of the race, plus two small Cat-4 ascents just before the end. It’s a good scenario for a victory-hungry team to keep pushing, yet the most reasonable scenario is a big break holding an equally huge margin through the finish line.

Tirreno-Adriatico was holding its Queen stage on Friday, with a profile – just like in France – leaving no respite and posing a demanding challenge at the end: the 12km long, 8% average, climb of the Sassotetto. A day Héctor Carretero (Movistar Team), wearing the Maglia Verde inherited from race leader Mike Woods (EF1), used to go again on the offensive.

The Spaniard joined the early, ten-man breakaway and took new points at both the HC climb of Santa Margherita and the Cat-2 San Ginesio, facing strong opposition from Marco Canola (GAZ), just behind him in the KOM standings. As no points were left for him with the peloton chasing insistently, Héctor, then virtual leader, dropped back to the field with 45km to go.

Héctor was eventually able to step onto the day’s podium, now as official holder of the jersey, as the GC contenders best placed in the KOM standings didn’t get any points, with Simon Yates (MTS) taking over the GC lead with a convincing solo victory. Saturday’s stage six will be the last opportunity for the sprinters, over a completely flat circuit at the end in Senigallia (171km).