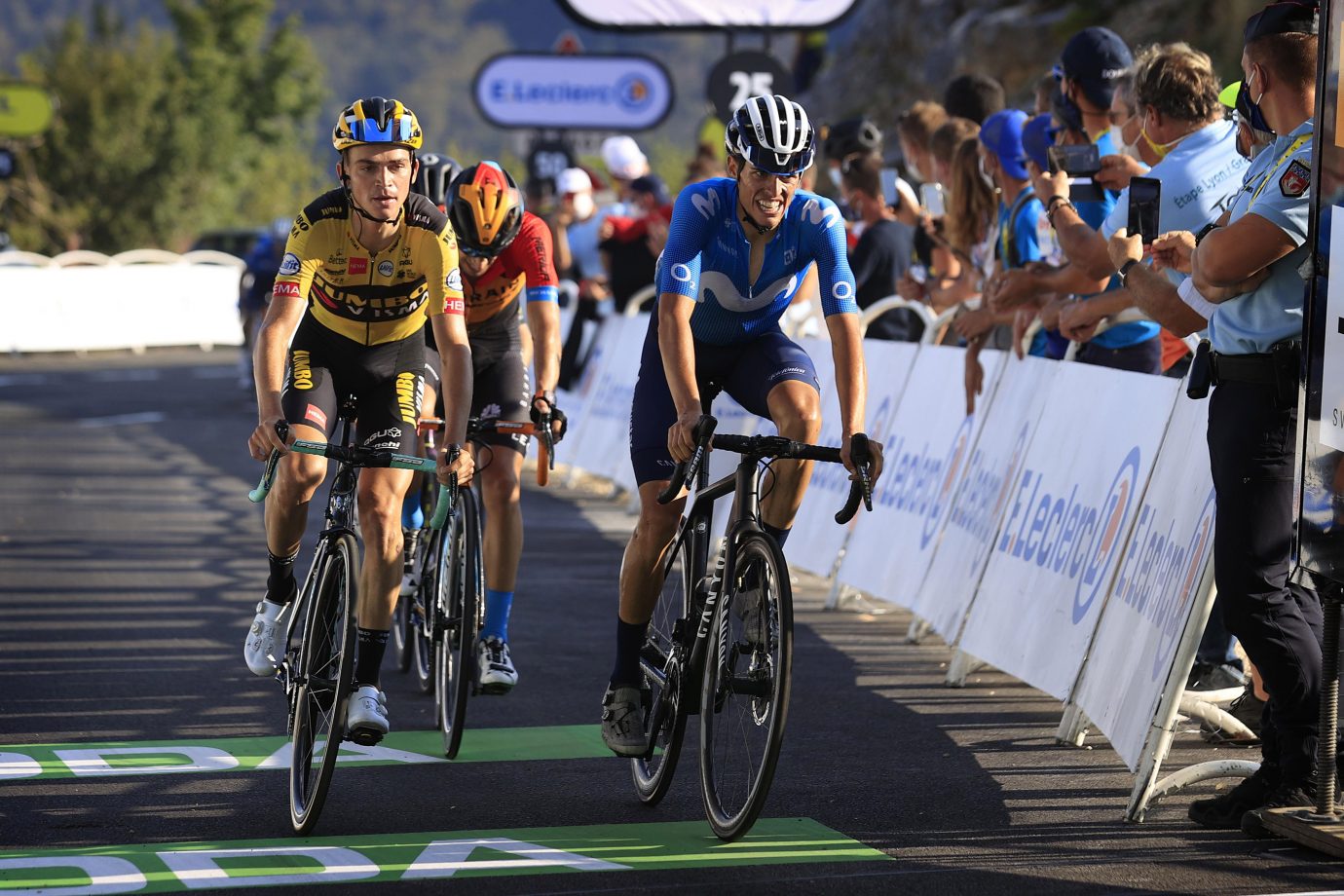 Enric up to eighth overall -with Valverde in twelve- as Blues continue their steady progression in a brutal Jura mountain stage. Carretero wins KOM classification in Tirreno as Samitier shines into break.

Many people defined it yesterday as the first big mountain stage in the Tour, even after we’ve covered mountain-top finishes such as Orcières-Merlette or Mont Aigoual, all Pyrenees stages or even the brutal route last Friday in the Massif Central, towards the Puy Mary. However, the final section of Sunday’s stage 15 in the ‘Grande Boucle’ is another very different story. The final series of climbs to the Selle de Fromentel (Cat-1), the Col de la Biche (Cat-1) and the Grand Colombier (HC; 17.4km @ 7.1%) promised to be a huge test for the GC contenders.

The bright sun continues to follow the Tour peloton’s way. A warm 30ºC in the valleys and 22-25ºC at the top of the day’s climbs, with no significant winds, mean that, after 15 stages, and except for the Nice opener and the second Pyrenees stage – well, it’s seemed like the Tour we’ve always known in July!

Enric Mas: “We feel quite happy with our performance today. If you think about it, three weeks, one month ago we were in Dauphiné and we weren’t able to stay with the GC contenders even at the 10k mark, and now in the Tour we’re constantly improving our overall position. We’re now in eighth place before this rest day, which we will take advantage and enjoy as much as we can, yet we must remain focused because the final week is so, so, so hard.

“There’s two riders [Roglic and Pogacar – ed.] ahead and the rest – well, sometimes someone cracks while others keep up, sometimes it’s the other way around. The important thing for week three is not having a bad day and continue to improve bit by bit. The rivals ahead are not unbeatable, yet they’re really strong, though we’ve already seen today that everything can change by the minute.

“I continue to feel impressed by the overall level of the whole peloton. It really shows that this Tour was the only big goal for every single team heading into this part of the season, since it was held prior to Giro and Vuelta and with no big classics just before, so everyone was coming here with full power. That’s why I tackled about the pace by the whole field a week ago, even if some people misunderstood it. Let’s see what we can do next week.”

Alejandro Valverde: “I think we can extract some good conclusions from what we could do today. As you can see, we’re reaching further every day and coming closer to the main GC guys. We’d of course have liked to contest the stage win, but I was suffering from cramps into the final slopes and Enric was lacking some energy to fight with the guys at the sprint. We must feel happy about today, though, as I said.

“It remains pretty close at the front -other than Roglic and Pogacar, who seem like really hard to beat if they don’t have a bad day before Paris- and it’s still a long Tour ahead; it’s only five stages before Paris, obviously, but there’s plenty of hard mountains. Anything could happen, as you could see today. Big riders could still crack, either ourselves or any other contender.

“We continue to rely on what Enric can do and we’ll keep on pushing, stronger and stronger, for him to finish as close to the top as possible. He took an important step today. In my case, if I can aim at a stage win, it would be great, but it’s not something I’m obsessed about by any means.”

The Tour convoy will enjoy its second, final rest day on Monday at their hotels in the Isère department. The race will resume on Tuesday with the first of three purely Alpine stages in the race, 164km with five categorized climbs including the Montée de Saint-Nizier-du-Moucherotte (Cat-1 + Bonus; 11.1km @ 6.5%), 21 kilometers from the finish in Villard de Lans (Cat-3), also uphill – 2.2km at 6.5%. The Movistar Team will be again wearing their yellow ABUS helmets as leader of the team GC.

It was a day full of decisive battles -at least, for what the Movistar Team is concerned about- as Sunday’s stage seven in Tirreno-Adriatico was the final contest for the KOM classification jersey, into a demanding circuit in and around Loreto and Recanati (181km) that offered up to 20pt for the Maglia Verde. Héctor Carretero was starting the day only three points ahead of nearest rival Marco Canola (GAZ).

Fortunately for the Spaniard, the fight for the jersey was overshadowed by a huge early break, a 14-rider group featuring Sergio Samitier and with no riders close to Carretero in the KOM standings. It was a great effort from ‘Sami’, who tried several attacks and dug deep until the very end into a escape that contained the day’s first three finishers: Mathieu van der Poel (AFC, 1st), Ruben Guerreiro (EF1, 2nd) and Matteo Fabbro (BOH, 3rd). Samitier was neutralized by the selected GC group with just 500m remaining.

The race ends Monday with its traditional ITT showdown by the Adriatic coast, in San Benedetto del Tronto (10km), with Simon Yates (MTS) in the GC lead. Héctor Carretero will receive his final Maglia Verde as official winner of the KOM jersey at the end of the stage.