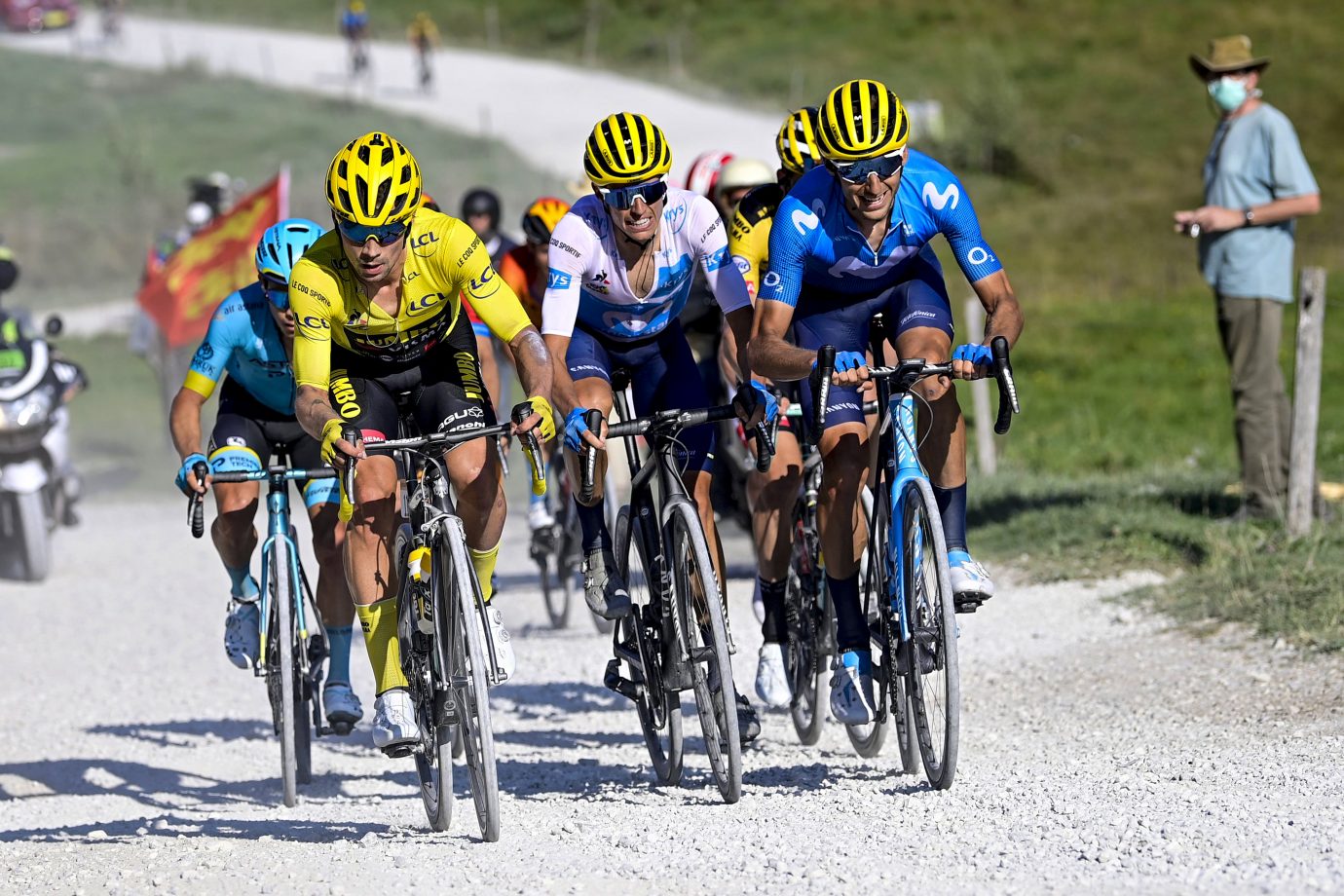 Spaniard from Movistar Team shows strongest level yet in this year's 'Grande Boucle': goes on the attack, gains two places to sit on the verge of GC top-5 before TT showdown towards La Planche des Belles Filles.

A huge stage to complete the (road race) mountains of the 2020 Tour de France. The 175km between Méribel and La Roche-sur-Foron offered absolutely no rest to the riders from the foot of the Cormet de Roselend (Cat-1), always up and down. The first climb was followed by the cols of Route des Villes (Cat-3), Saisies (Cat-2), Aravis (Cat-1) and the Plateau des Glières (HC + Bonus), with a gravel road after its summit, prior to taking on the non-rated Fleuries and going down to the finish.

The forecast for yesterday’s stage talked about likely thunderstorms into the last two climbs, yet the riders were fortunate not to suffer them. Thursday’s stage was again expected to have some rain, in the section between Saisies and the Plateau des Glières. Temperatures would range between 17ºC, at the top of Roselend, and 28ºC, at the finish.

Enric Mas: “It was such a difficult day, and we’re satisfied with how it went. I think we defended ourselves well, also trying to go on the attack and leaving an overall good impression. Doing our best, doing what we were thinking at this Tour, a good overall result, and step by step, we’re getting there. We couldn’t get terrain back yesterday, but we got those two places today, ahead of world-class riders like Yates and Urán, two remarkable competitors, and we’re happy with what we did today. We already said before that the third week should have been our best in terms of form, and we proved it again today.

“That final gravel road section, after the long efforts and the slopes of Glières, ended up being so hard even if quite short. Seeing how the situation was after that climb, with Porte dropped and the other rivals trailing further behind, I was interested on having the group going further, and that’s why I was talking to López [he also did at the finish, and was asked by the journalists on it – ed.] There were quite different interests in the group, with some people wanting to pull, others not willing, Jumbo telling us that Wout (van Aert) was coming from behind – and in the end, the two groups got together.

“Mountains over? Not really: there’s still one big mountain left, which is La Planche des Belles Filles. It will be down to the energy left in the tank at the early section and then, sort of a mountain TT. I just can do my best and see if how much I can improve my GC result.”

Friday’s stage 19 should offer the race contenders some respite before Saturday’s TT showdown towards La Planche des Belles Filles. 166km, with only one Cat-4 climb, are to be covered between Bourg-en-Bresse and Champagnole, again in the Ain and Jura departments – yet this time without any big mountains. Will there be any teams ready to control for a bunch sprint, two days before Paris, or will we instead enjoy the predictable big breakawy contesting a much-coveted TDF stage success?

The men’s Movistar Team’s menu for Thursday was completed by the 68th edition of the Coppa Sabatini, a UCI ProSeries event over a long 210km in and around Peccioli, featuring up to twenty little climbs between those to Terriciola (3.8km @ 3%) and the finish up Peccioli’s Piazza del Popolo, 1km at 7%.

The Blue outfit tried to avoid the bunch sprint -where Dion Smith (MTS) came victorious- with some great attitude into the final laps, trying to create some echelons in the crosswinds with Hollmann, Mora, Elosegui and Roelandts and also launching Jorge Arcas several times on the attack, both in the early stages and into the final 10km.

The Telefónica-backed squad will again compete in Italy, for a final time as a group, on Saturday at the Giro dell’Appennino, with Davide Villella replacing Pedrero in the Blue lineup.