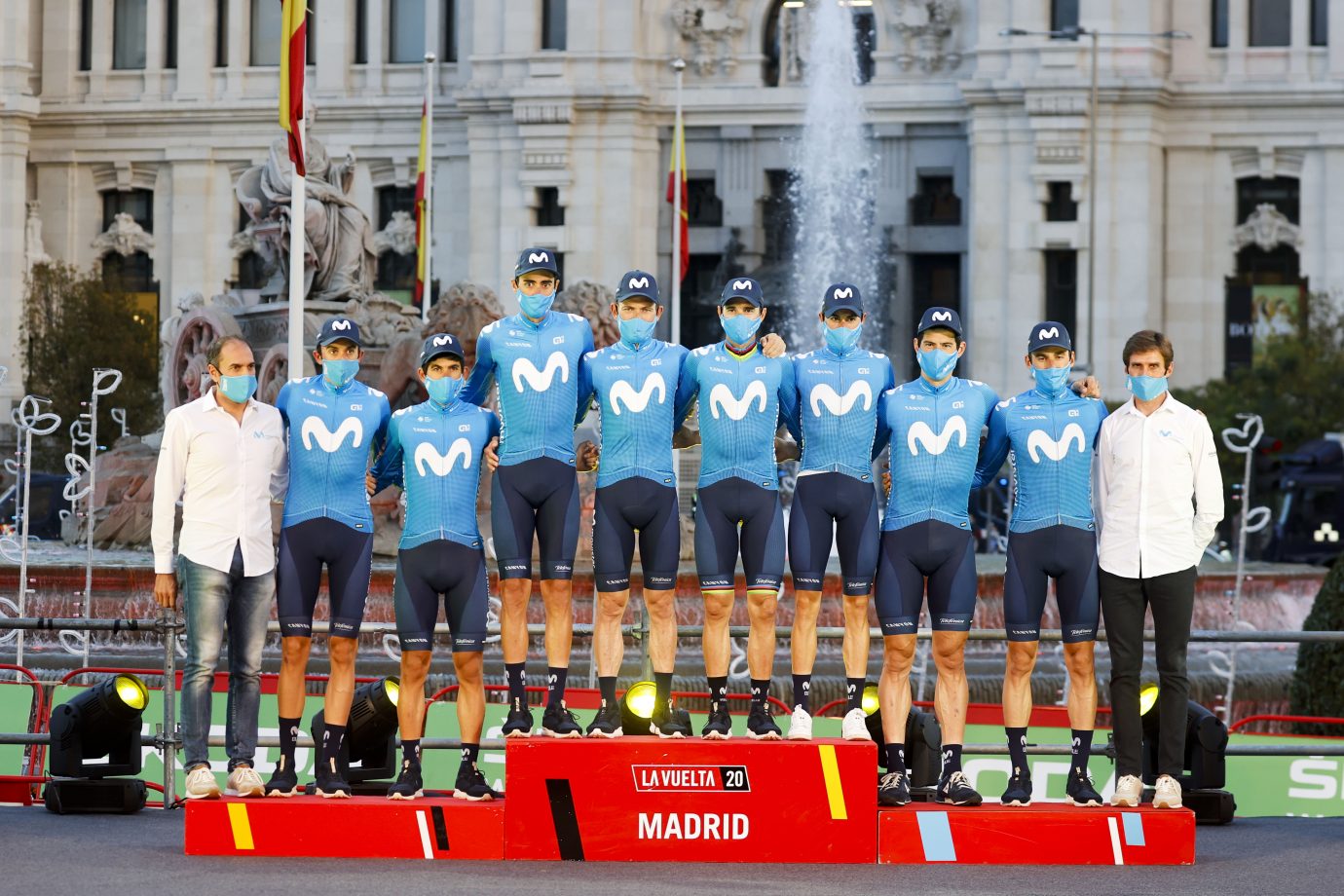 Enric Mas -5th overall, best young rider-, Valverde (10th) and Telefónica-backed squad -which got one stage win with Soler + their 12th team GC- shine as cycling completes its most difficult season with three weeks of commitment and team spirit from the Spanish outfit.

Primoz Roglic (TJV) conquered his second consecutive victory in La Vuelta as the 75th edition came to its end on Sunday. Despite all difficulties it had to go through, due to the global health crisis, the Spanish Grand Tour was able, like the Tour de France and the Giro d’Italia, to reach its last finish line in Madrid, with the Slovenian crowned on a final podium also featuring Richard Carapaz (IGD, 2nd) and Hugh Carthy (EF1, 3rd). The celebrations also included a double visit to the podium by the Movistar Team, which was one of the most active squads over the three weeks of racing.

Enric Mas equalled his TDF result to finish in 5th place overall and conquered the white jersey as best young rider, leading a Blue outfit which notched up one stage victory at home, with Marc Soler in Navarra, and also got, for a record twentieth time in his career, Alejandro Valverde (10th) within the best ten riders in a Grand Tour GC.

The Movistar-sponsored outfit also conquered the team classification, their 12th victory (an all-time record and a third consecutive win) for a group who gave it their all, with grit and determination, thanks to the efforts of Erviti, Verona, Rojas, Oliveira and Arcas.

“I’m delighted with the team’s behaviour over the three weeks of racing, all of them, with no exception. The attitude has been magnificent, and turned us into big protagonists for most of this year’s La Vuelta. I feel like we haven’t been rewarded in a proportionate way for our merit, work and attitude all over the race, at least when it comes to stage wins.

“The victory we got near our team HQ in Lekunberri was definitely a great start to La Vuelta, with a great Marc Soler, whose efforts during this race have been brutal. It’s obvious that we came here aiming for a podium or the outright victory, but there was simply four riders who were more consistent at this race than Enric Mas, who deserve to be ahead. However, I feel quite satisfied about his performance: other than his white jersey as best young rider, he’s completed two consecutive Grand Tours at an impressive level, at just 25 years of age, which good results which make us hope we’ve got a strong chance to do well with him in the future. Regarding Alejandro Valverde – it’s difficult to say or ask anything more than what he already does; he’s a huge asset to our team, and even if victories haven’t come his way as easily as they had done for the past two decades, having him here has been of great support for the youngsters, as a reference to follow. And the team classification – I think we deserved that, as a display of what I think we’ve been during this race: the strongest team on course.

“I’m not forgetting about those who have worked so hard for these results. Imanol Erviti, who has offered – I’ve already told him about this – impressive performances over the second half of the Tour and this year’s La Vuelta, a level I didn’t remember from him in many years, with his fundamental experience and skills. Nelson Oliveira and José Joaquín Rojas are wise people, who know how to work hard and support the team leaders, and they’ve also been impressive here. Jorge Arcas, who continues to bring his best game to the table at every Grand Tour we enjoy with him. And Carlos Verona, who has confirmed in this Vuelta the great step forward he took in the Tour de France, as a great team rider and someone fundamental for our goals over the whole season. Plus, the staff, who is not stepping on the podium today yet deserves these great results as much as the riders do.

“I want to congratulate Unipublic on their excellent job to carry La Vuelta out with such huge success. Also to the whole cycling ‘bubble’, for their commitment to keep everyone safe against the risks caused by the current health crisis, being able to start and finish this second half of the season which looked as bleak as it did back in the summer. Being able to cover most big races has been a testament to everyone’s hard work. Last but not least, I’d like to thank the fans for their respect and behaviour, following the request the race made to them. We need their support on the road, but this year, we needed their collaboration even more. They’ve been exemplary.”