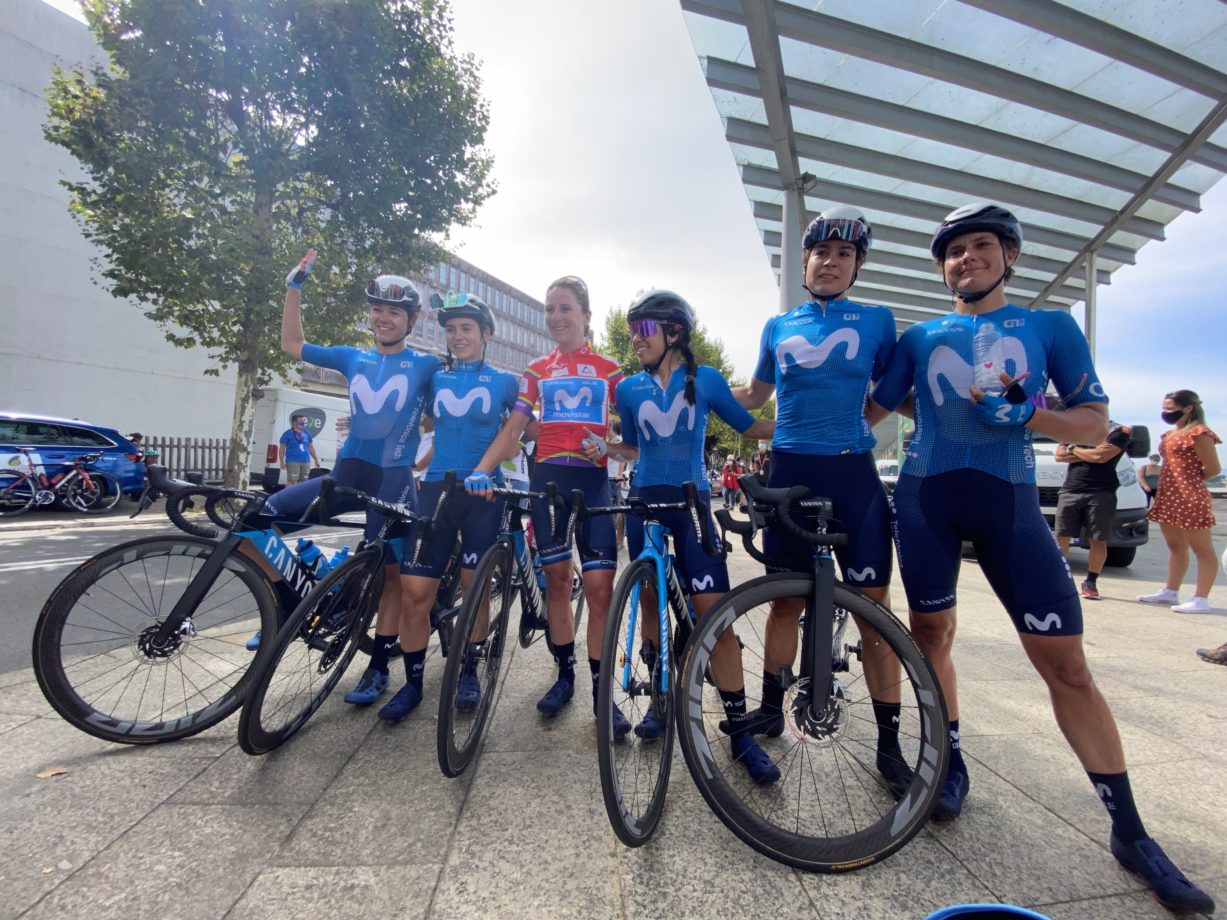 The women’s Movistar Team’s extraordinary 2021 season lived yet another brilliant chapter this week in Galicia, Spain, at the revamped Ceratizit Challenge by La Vuelta. Annemiek van Vleuten completed a sensational display as she won Friday’s Manzaneda mountain TT and stormed to GC success with a 50km solo escape to Saturday’s stage 3 win in Pereiro de Aguiar.

The Telefónica-backed squad -with Leah Thomas, Sara Martín, Sheyla Gutiérrez, Lourdes Oyarbide and Paula Patiño supporting Van Vleuten- again defended itself, just like in Norway three weeks ago, with cold mind and great vision over the 107km lumpy stage four course from As Pontes to Santiago.

The Blues controlled early, supported Miek wherever it was needed and really dug deep into the main splits to chase the stage win. After an initial, 13-woman break with Martín and Thomas, the group shrank to four near the end, with Thomas still in and active to the point of going solo with 10km to go. The American was only caught at the finishing slope in Santiago, just 200m from the end, by the strongest sprinter in the field, Lotte Kopecky (LIV).

Van Vleuten is now up to 12 victories in 2021 -her UCI palmarès has now reached 85 wins- as the Movistar Team organisation reaches 35 this year, 21 with a women’s program which never stops shining wherever they go. Especially when they race in Spain -they won with Annemiek in Valencia, Navarra and San Sebastián- against the world’s best.

“It was a nice stage; I don’t feel it was a crazy one, it was just that lots of teams were going for the stage win, including my own team, who also went on the attack. Normally, on a day like this, you would go and just defend the jersey, but considering the differentes in the GC were so big, I encouraged the girls to go for the stage, and Leah really did well to join that break and fight until the end. It was an exciting stage, it’s nice to have had this shown on TV, that this kind of racing is seen. Yesterday I had a really good day, and today my main goal personally was to just get to the finish and have my team-mates go on the break. it’s nice and important that they had this chance.

“This is a really nice win for both myself and the team. I love to race in Spain: I love the terrain, the spectators are always so nice. This was a last-minute addition to my calendar, since it was the last hard stagerace I could race in the calendar this year. I like racing in Spain and it was also important for Movistar to do well with us in the team’s home country.”