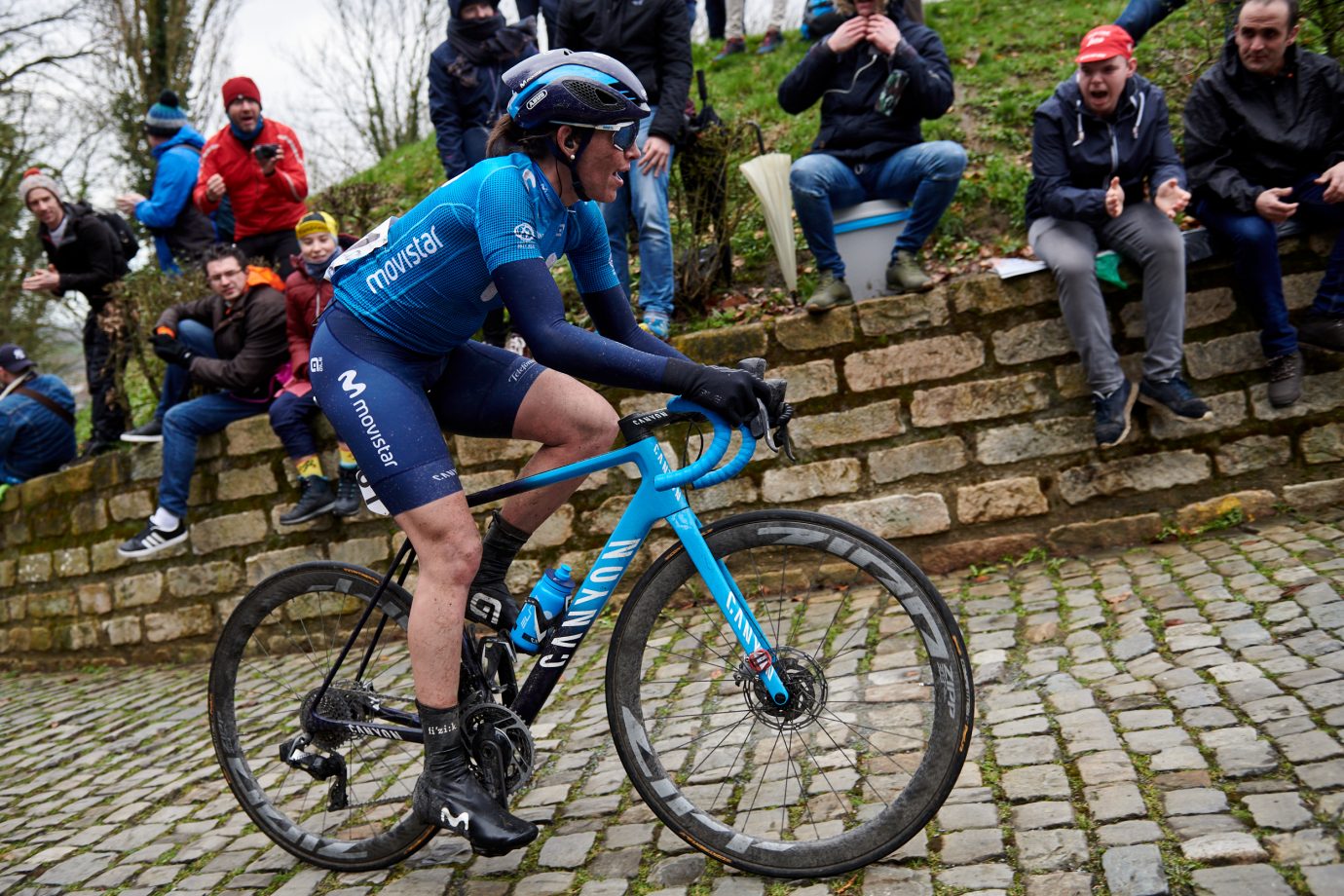 Frenchwoman back into top-ten after seventh in 2019, performs within world's best in cold, rainy, windy race; Jürgen at second group in Ninove, supported by strong Johan Jacobs.

At her first classic of the 2020 season, Aude Biannic took a step forward for the Movistar Team with a great top-ten result in the Omloop Het Nieuwsblad -UCI 1.1, 126km from Ghent to Ninove with plenty of hills and cobblestones in the heart of Flanders-. The former double French champion took 10th place (+1’30”) as he finished inside a second pursuit group from dominating Annemiek van Vleuten (MTS), who attacked on the slopes of the legendary Kapelmuur to take the win.

Biannic stayed at the front as a decisive split of 22 riders formed with 50km remaining. Despite the Brittany native struggling into the final climbs, the experience over the years kept her calm to get back to the second pursuit group and finish with a good sprint -third within her peloton-, after a cold, rainy, windy race, in pure Classics style.

The race wasn’t free of incidents for the Movistar Team, with crashes for Alicia González -with a blow to her ribs- and Sheyla Gutiérrez -some minor bruises to her knee- which will require, in the former’s case, checkups from the team’s medical staff before Sunday’s Omloop van het Hageland.

There wasn’t any lack of effort either from the men’s Movistar Team led by Pablo Lastras on Belgian soil. The Blues had two of their members inside the early break, with Matteo Jorgenson and Lluís Mas caught 100km from the finish by a peloton shattered by the echelons. Jürgen Roelandts and Johan Jacobs -the young Belgium-based Swiss making his WorldTour classic debut- were then in charge for a decent result for the Telefónica-backed squad.

Roelandts finished in 16th place (+1’28”) inside the main peloton in pursuit of Jasper Stuyven (TFS), who won ahead of Yves Lampaert (DQT, 2rd), Soren Kragh (SUN, 3rd) and Matteo Trentin (CCC, 4th), while Jacobs (27th) completed the race into group three, over two minutes behind the victor. The Blues will be back racing tomorrow at Kuurne-Brussel-Kuurne.