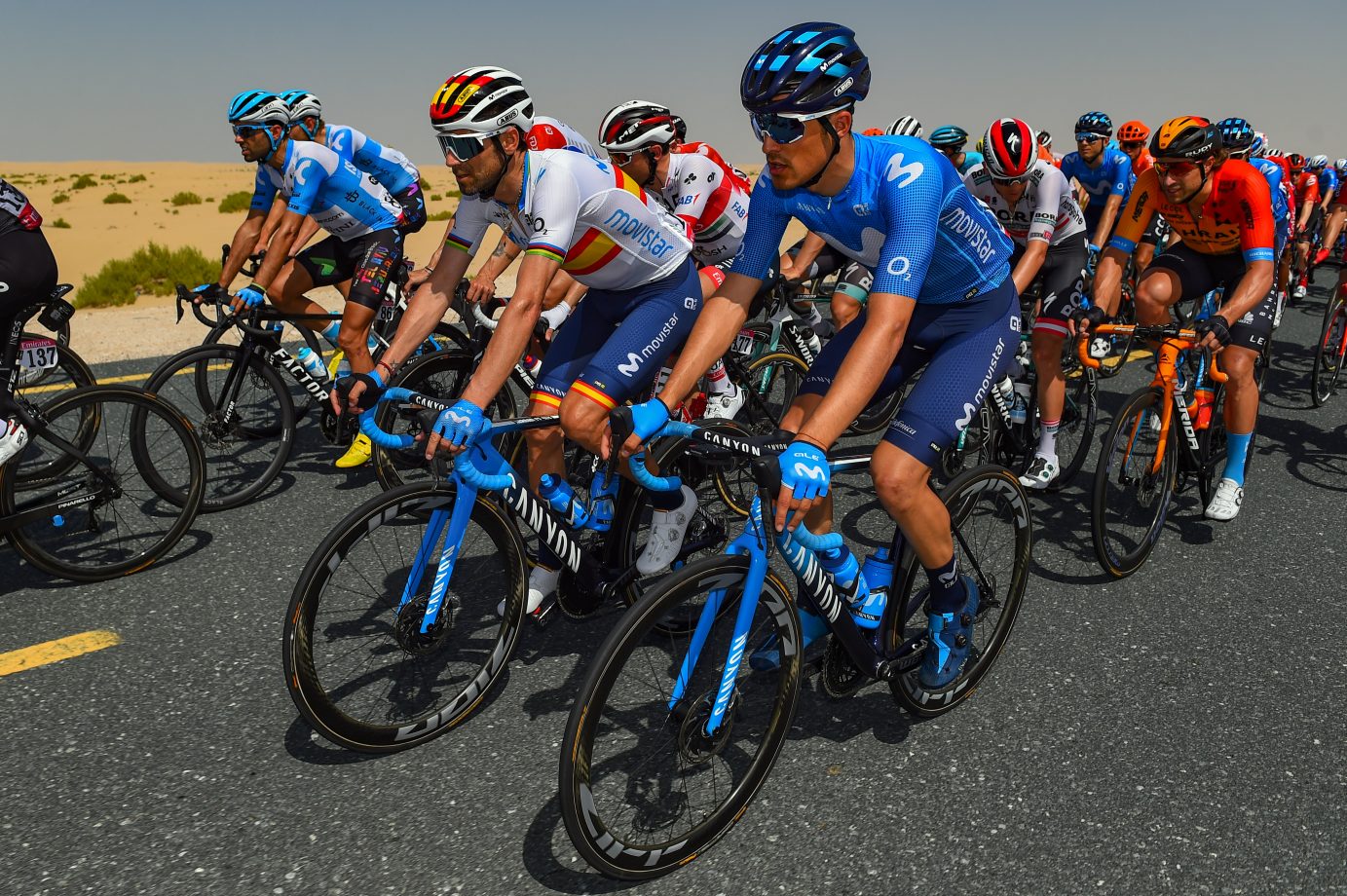 As we reach ten days to go for cycling after a five-month stop due to the pandemic, we look at different angles fans can focus on as action resumes in Navarra on July 23.

There’s probably no other sport which has endured, and come through, as many things as cycling has done during the last 25 years. And after a health crisis as no other witnessed in the last century – which still kills thousands of people around the world each day – the peloton will roll off again, under strict internal (the teams’) and external (the organisers) health procedures and following the guidelines of every country they compete in. Should the evolution of the pandemic not prevent it, bike racing will also get through this mountain. The Movistar Team will sadly be one man down as we return, after carer Pep Toni Escandell tragically passed away only days ago. His character and dedicated work will not go unnoticed when we resume racing.

2/ A YEAR FULL OF SURPRISES? EVERYTHING PLAYED OUT INTO 100 DAYS

An unimaginable compromise for a really unique season. Humble organisers and big media groups have both found a place into a season reboot where all three Grand Tours, the World Championships and all five Monuments will be crammed into barely three months. Sanremo, Lombardy, Dauphiné and the National Championships will be August’s warm-up for Le Tour (29 Aug – 20 Sep), the Giro (3-25 Oct) and La Vuelta (20 Oct – 8 Nov), the latter ridden after daylight saving time is gone. Also, a big climbing course in Switzeland for the Worlds (20-27 Sep), and Liège, and De Ronde, and Roubaix (all in October – all with a women’s race)… You don’t want to miss this!

3/ ENRIC MAS LEADING THE MOVISTAR TEAM AT THE TDF…

The biggest point of media attention for the Blues in 2020 will probably come from what Mallorca’s Enric Mas can do in the Tour de France, the 25-year-old leading his home WorldTour team at the race he’s always dreamt of for the first time. To tackle the ‘Grande Boucle’ in the best possible condition, he will race first Burgos, Dauphiné and the Spanish Championships in Jaén, seeking for good form into a race with plenty of mountains from the very start.

A long progression will see Catalan Marc Soler finally enjoying full support as a team leader at a race, the ‘Corse Rosa’, whose long climbs and more abundant TT terrain should favor him better. Even if he will go to Burgos and Dauphiné alongside friend and team-mate Mas, his calendar will then turn on to Italy to prepare his biggest goal of the year at Tirreno-Adriatico.

Not looking for a result from him, yet expecting everything from this huge legend. With Alejandro Valverde, every racing day is one to enjoy. Every scenario seems easier to tackle with him. The marvel from Murcia will be racing Tour + Vuelta, while also attending the Nationals near his home in Jaén – and not losing sight of another big goal in the Aigle-Martigny Worlds, with its demanding course. This half year without any racing might extend his already, seemingly everlasting career – even if he’s got a Movistar Team contract signed only through the end of 2021, anything can happen with him.

Despite multiple cancellations significantly hampering the Sebastián Unzué / Jorge Sanz-led group’s chances to shine, the women’s Movistar Team present at the one-day races in Navarra (23 / 24), Durango (26) and Strade Bianche (August 1) before a half-month stop, what’s left in the calendar really suits them well. The youthful -all 11 riders are 30 or less-, well-balanced Telefónica-backed squad will be tackling climbing races like Ardèche, Giro Rosa or Occitanie; all big classics (Ardennes + Flandes); the new Paris-Roubaix; and unknown challenges, such as Emilia, Bretagne or Brabant. Hoping it goes well for them!

An opportunity to shine in the mountains for Einer Rubio and Juan Diego Alba; Iñigo Elosegui’s continuous quest for all-rounding development; the first big classics for the brilliant Johan Jacobs, Gabriel Cullaigh or Juri Hollmann; the ability to do well in all terrains Matteo Jorgenson has always proven – there’s much to look for into riders that could soon become the heart of this Movistar Team. Some of them could even enjoy a chance to ride the Grand Tours as soon as 2020.

It’s been eight months since his horrible injury in Girona back in the winter, and following a long, painful recovery, the Dane is hoping to put a backnumber on this summer, his plans still to be confirmed. His debut will be another moment of joy for a Movistar Team that is getting to the ‘starting line’ of this reboot with all 39 riders fit to compete.

Launched less than three weeks ago, it’s a project as much in line with Telefónica’s values as was the launch of the women’s Movistar Team back in 2018. Reducing the impact on our planet the team’s daily activities has been a determined effort by the company led by Eusebio Unzué and Miguel Grávalos since late last year, looking to offset our carbon footprint and leave a world better than the one we’re currently in.

To end this compilation, one of the most beautiful actions the Blues carried out during the non-racing period is finally taking physical form. The Movistar Team is set to announce in the next few days the race and final design they’ll use with both of its teams to communicate on their Alé-crafted, Loris Gobbi-designed Charity Jersey project, with an auction to benefit both the Spanish Red Cross and Italy’s Protezione Civile.