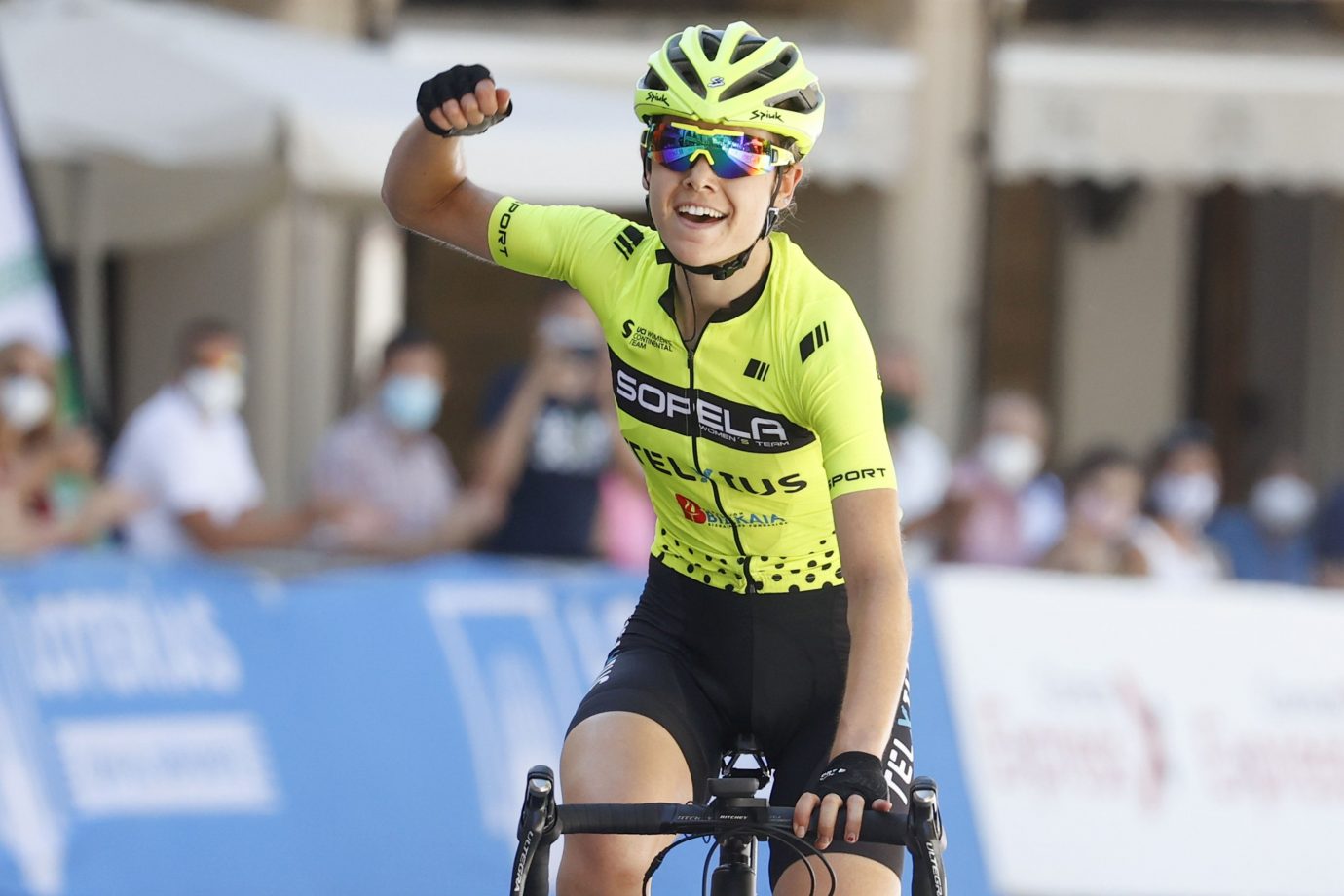 Allrounder from Aranda, Burgos (21 years old) to ride for Telefónica-backed squad in 2021-22 after great progression this year, conquering both Spanish U23 road titles and becoming national ITT vice-champion with the elites.

The Movistar Team announced Wednesday that Sara Martín (Aranda de Duero, ESP; 1999), a current member of the Sopela Women’s Team, will be part of the WorldTour outfit managed by Eusebio Unzué starting January 1st, 2021, and for the upcoming two seasons (through the end of 2022).

A graduate student in Chemistry at the Valladolid University, a degree she will finish as part of the Blue squad, Martín is a strong allrounder -great rouleur, solid climber, reasonably fast- who has taken the key step towards the top in her career with impressive results in the last few months, right after the return of racing.

Martín, winner of the Spanish Racing Series’ round in Villasana de Mena in 2019, notched up last August in Jaén both titles up for grabs at the Spanish U23 Championships, in the road race and the individual time trial. At those events, Sara also hobnobbed with the best elites in the country: she was 2nd overall in the TT, ahead of future team-mate Sheyla Gutiérrez, and 5th in the road race. The Burgos native finished in 16th place at the European U23 Championships in Plouay, as part of a Spanish national team she’s been a regular of in the last five years, at European (U23) and World (junior) Champs. She will be racing her first ever Worlds as an elite this week at Imola, Italy, both the TT (Thursday 24) and the road race (Saturday 26).

Sara, the Movistar Team’s third signing for 2021 after the confirmed additions of Emma Norsgaard and Annemiek van Vleuten, continues to reinforce the Spanish core of the country’s only top-tier squad, carrying the flag in events around the world.

“It’s really exciting for me to take this step forward,” explains Martín. “Already taking the step from junior to a UCI elite team with Sopela, where some of my references, the Spanish riders who were taking the step towards the Movistar Team, were cutting their teeth, was really important. Now, having the chance to join them in the WorldTour, sharing teams with them, or even with world-class athletes such as Annemiek van Vleuten, is such a big opportunity for me. Ever since I took the step towards full-time cycling I’ve been progressing every year, and this leap forward will be huge for my career.“

“I hope to be able to support the team wherever I’m needed, learn as much as possible and squeeze every bit of experience from every team-mate I come across. Riding the best events in the world will help me progress from a technical and tactical standpoint, which is the thing I’m looking forward to improving the most, even if I’m aware it’s still a long way for me towards my best physical level. I’ve always given great importance to my Chemistry studies, looking towards the future, and balancing them with professional sport requires focus and discipline – which has also helped me with cycling. I’m quite exigent with myself and I want to give my best for the team from the very start, and once I finish my studies, progress even more as a rider and person. All in all, ‘giving it your all’ (my motto) in everything.

“Sara’s arrival reinforces our commitment to relying on Spanish up-and-coming talents for our future success,” underlines Sebastián Unzué. “She’s a rider who, despite her youth, has already shown to be able to do great things already in the present. She performs well in all terrains, and the best is that she’s got great room for improvement in all of them, which makes us really excited to be able to give them all opportunities to keep growing, improving and hopefully become a reference in Spanish cycling. Her signing is a confirmation of our gamble on Spanish cycling, while it will be really positive for women like Sara to ride alongside a big leader like Annemiek.”