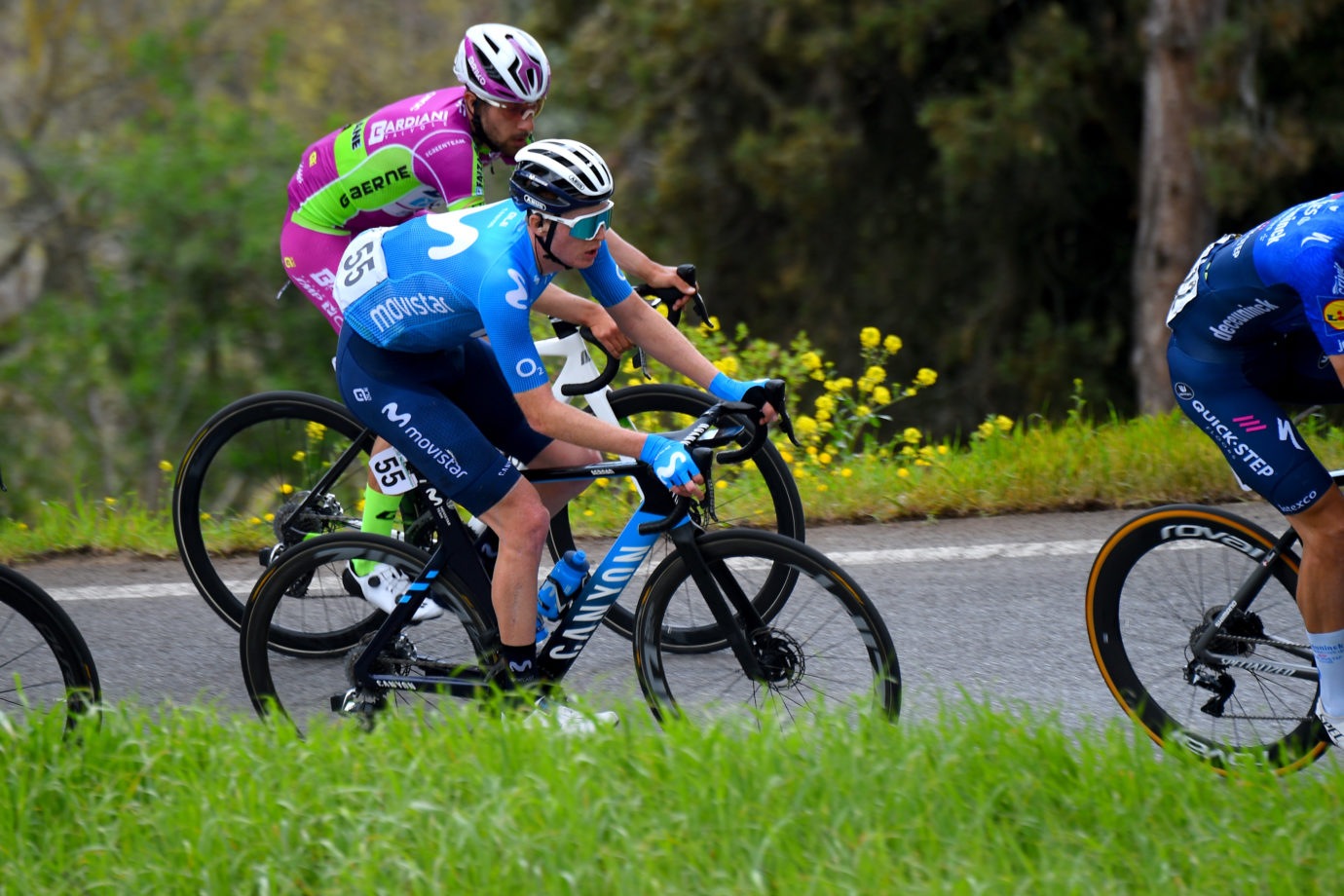 Updates from the Italian race

A daily report on our website, in short form, from the Movistar Team’s efforts at the Emilia-Romagna race, Tuesday 23rd to Saturday 27th.

He didn’t find this week the excellent legs he showed during Paris-Nice earlier this month, yet Matteo Jorgenson (Movistar Team) still wanted to turn things around and improve his overall situation at the final hilly circuit in Forlì, over seven climbs (3km at 7% each) to the Rocca delle Camminate.

The American got himself into an early break with strong names like Mikkel Honoré (IGD) -involved, just like him, in the GC contention-, Ben Swift (IGD) and Alessandro de Marchi (ISN). All of them were neutralized into the last two laps by a peloton where Jumbo-Visma successfully defended the GC victory of Jonas Vingegaard (TJV). The stage won was actually taken by Honoré, who attacked from the main group at the final descent together with his fellow countryman.

It was another day on the move for the Movistar Team at Coppi e Bartali, with a good performance from Puerto Rican Abner González at a very hilly stage four in and around San Marino. The Caribbean rider was part of a 12-rider morning break, being caught with about 30km from the end.

González’s attempt was followed, with an attack inside the last 10km, by Héctor Carretero’s, which was also neutralised by the GC contenders. Jonas Vingegaard (TJV) took his second win of the week in the leader’s jersey, as Matteo Jorgenson finished around 15th place. The race will end in Forlì on Saturday, with seven climbs of the Rocca delle Camminate (3km at 7%).

Ethan Hayter (IGD) took the win a reduced field’s sprint in Riccione on stage three of the Settimana Coppi e Bartali, the route shortened to just 139km as the snow prevented the peloton from climbing the Monte Carpegna, the climbed where the legendary Marco Pantani prepared for races. Also shining as a climber featured Einer Rubio for the Movistar Team today.

Escaped into a strong, seven-man breakaway which also featured fellow countryman Osorio (CJR), the Colombian was caught before the last GPM of Albereto (Cat-2), about 25km from the end, by a small peloton which contested the volata, with Matteo Jorgenson (17th) always in. Friday’s stage four will take the American on another hilly test at the Republic of San Marino, with 6x a 2.2km climb at 6%.

Dane Jonas Vingegaard (TJV) took the win at a tight contest in Sogliano, the peloton only splitting at the final lap of a demanding circuit where Matteo Jorgenson again made his best effort to limit losses at the steepest slopes.

The American took 20th today, 31″ down on the winner, and now sits 20″ off the overall top-ten, also led by Vingegaard. The race remains wide open in its top places, and could still change a lot in the three remaining stages. In turn, Einer Rubio sustained a crash (with no consequence) which kept him away from contesting the finish.

Thursday’s route will be another demanding one, full of climbs -including the Villaggio del Lago (Cat-1) and the steep Albereto (Cat-2; 2.5km at 10%)- in the 139km around Riccione. No rated ascents will be tackled, though, in the last twenty-five kilometers.

Over a course eventually shortened to just over 10km around Gatteo, home of day one in the Settimana Coppi e Bartali, the Movistar Team took 8th place at the TTT completing the double secotr in Italy. A stage the Telefónica-backed squad could only compete at with six riders, as Albert Torres, who was initially expected to take the start, didn’t eventually go down the ramp due to muscle pain following his crash in the morning.

Jorgenson, Norsgaard, Carretero, González, Alba and Rubio clocked a time of 11’57”, which left them 21″ off winners Israel Start-Up Nation. The Blues now sit 23″ off new race leader Mark Cavendish (DQT), who will probably concede that jersey at Wednesday’s hilly final circuit around Sogliano, with five climbs of 3.5km each, at an average 6%.

It was an eventful start to the Movistar Team’s Settimana Coppi e Bartali (UCI 1.1), which held on Tuesday morning the first stage of a double sector in and around Gatteo, with three climbs of the cobbled GPM of Longiano. While the sprinters’ teams prepared for the finish -the bunch kick was won by Jakub Mareczko (THR), ahead of Mark Cavendish (DQT)-, Albert Torres sustained a crash which caused him several blows and bruises, most importantly to his right-hand side. The Movistar Team’s medical staff did not detect any major injuries at their post-stage checkups.

The Menorca native was able to reach the finish as Einer Rubio (15th), Abner González (16th) and Matteo Jorgenson avoided the pile-up at the front of the group. The race jury neutralized any time gaps, which means that, heading into the evening’s TTT (Movistar Team starts at 4.14pm CET), all seven Blues will be 6″ off the race leader.