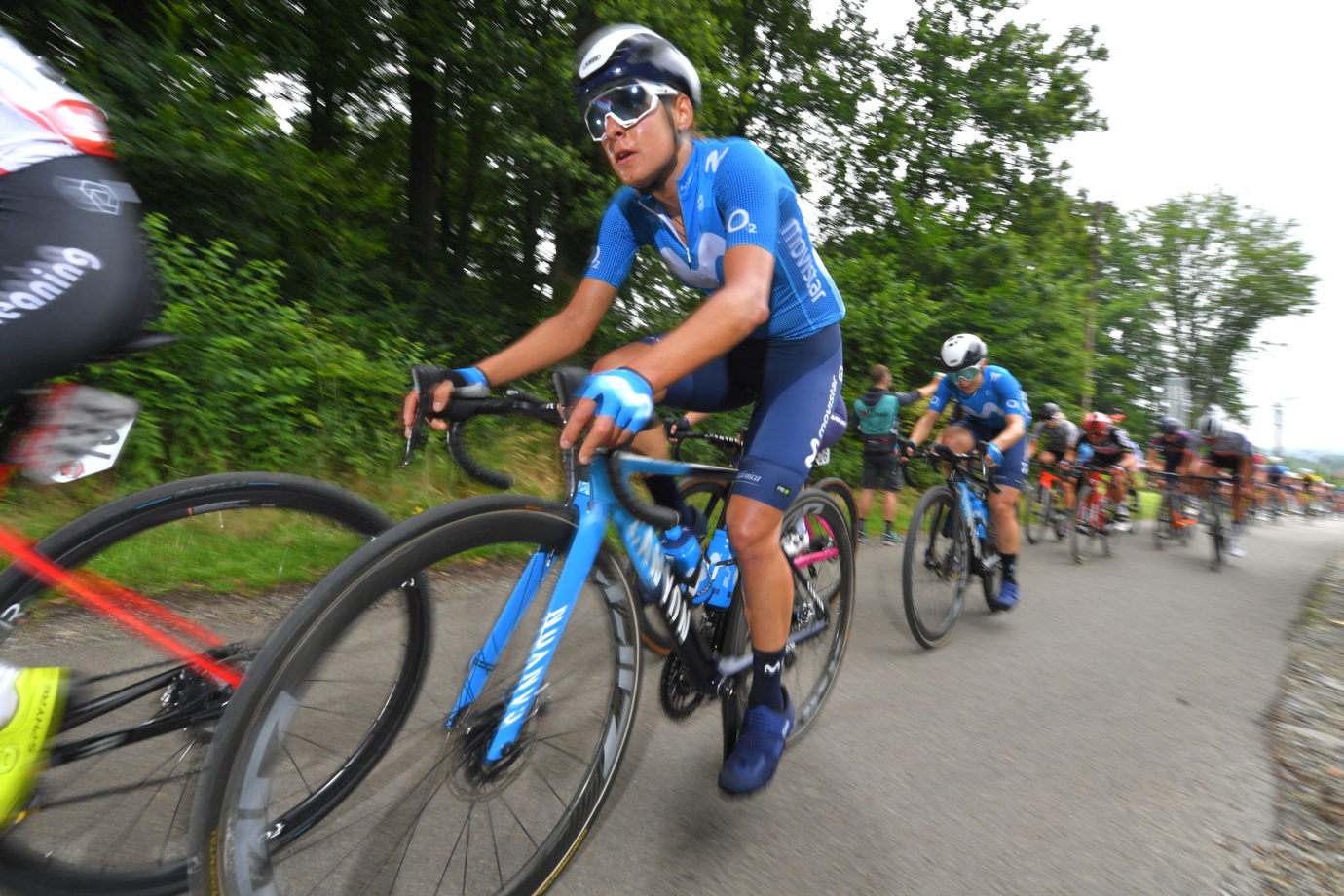 Daily updates from the race

More cobbles, this time with 3 ‘Queen of Stones’ sprints, 4 climbs (finish included) to the mythical Kapelmuur, and another 4 to the Boseberg.

Worrack (TFS), Ensing (BEX), Soto (NXG), D’hoore (BEL), Fortin (FRA) and Ysland (NOR) formed the day’s break, with several attacks in the climbs. CSR and DSM worked at the front of the peloton managing to maintain a less than a minute gap, with our girls riding grouped and well positioned around Lourdes Oyarbide, who defended the 4th position on the GC.

The break was caught at 20 to go but Ensign (BEX) managed to keep in front along with Van Dijk (TFS) and Kopecky (BEL) who attacked from the peloton and make it to the front after the penultimate climb to the Kapelmuur. Meanwhile Lourdes chased in a group at 30″ with Bárbara Guarischi and Sara Martín helping her to close the gap.

The three were neutralized thanks to an outstanding job by Bárbara, who also closed the gap on a powerful attack for the GC by Wiebes (BEX) at 4 to go.

In the final climb to the Kapelmuur Van Dijk went for it again followed by Kopecky, who took the stage and the final win. Lourdes finished at 30″.

Five laps to a circuit with a cobbled sector, a climb to the Steenhoutberg, a sprint for the ‘Queen of Stones’ classification and another 4 climbs to the Congoberg between sectors. A proper Belgian route with attacks that didn’t get much gap but lasted for kilometers.

This situations left Barnes (CSR) at the head of the race with 30 km to go, after the penultimate pass of the cobbled sector. Sara Martín, Lourdes Oyarbide and Alicia González held up at less than 1 minute in the main group. Barnes was caught with some kilometers before the final climb to the Congoberg and then the race came to a standby.

Ludwig (CSR) made her move before the cobbles but was caught just finishing the sector after an attack by TFS, that left the front of the race with Van Dijk (TFS), Kopecky (BEL), Amialiusik (CSR), Wiebes (DSM) and Lourdes Oyarbide, who made it there after a considerable effort.

Several attacks were made in the front group, with Lourdes responding to some of them. Amialiusik (CSR) throw the definitive one and took the win ahead of Wiebes (DSM) and Kopecky (BEL).

Lourdes finished 5th, a remarkable position that doesn’t reflect the outstanding work done by the rider from Alava.

A flat and ‘midly cobbled’ stage that saw many attacks, but eventually ended in a bunch sprint in which Bárbara Guarischi made a remarkable 3rd position behind Wiebes (DSM) and D’hoore (BEL).

Several attempts were made along the 105 km to form a break, but being the only ‘pure flat’ stage of this Lotto Belgium Tour meant that the sprinter’s teams wouldn’t let anyone take a significant gap. The bunch rode compact most of the day, however at 25 km a front group with the main contenders took some advantage, and in that precise moment Bárbara Guarischi had a flat tire.

After changing the wheel Gloria Rodríguez and Alba Teruel helped the Italian catch the main group, a struggle that took several kilometers riding full gas. Bárbara eventually made it and then the whole team started to work for her at the front of the peloton, leaving her in a very good position for the sprint where she took the 3rd position. Jolien D’hoore is the new GC leader.

Short but intense start for this Lotto Belgium Tour, all inside the land of the beer in the Circuit de Chimay. A specialists TT with only 4 right-handed corners saw Van Dijk (TFS) taking the win with a 5’34” register.