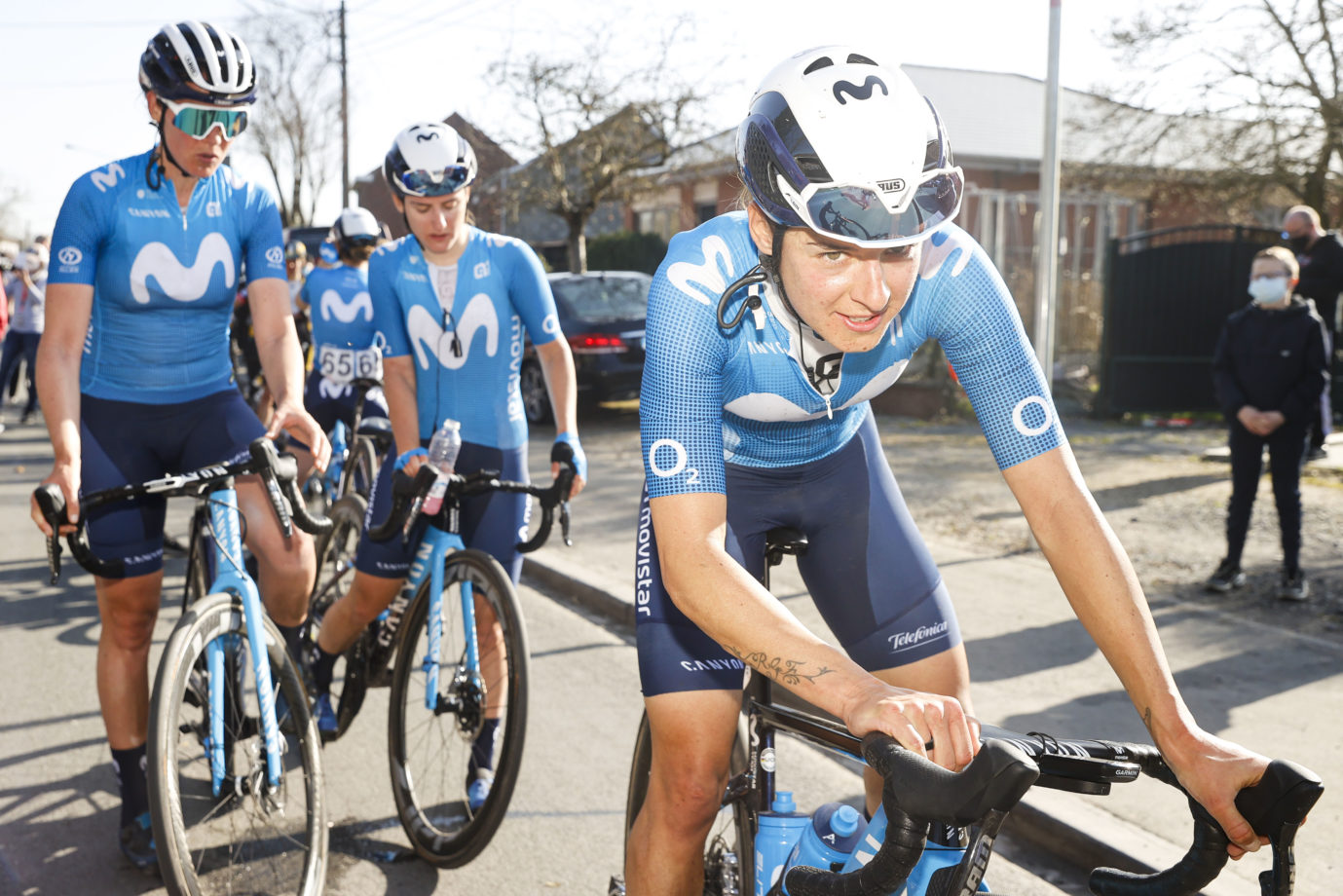 Following their announcement, two weeks ago, of a first signing for 2022 with young Australian Sarah Gigante joining the squad, the Movistar Team confirmed Monday that they’ve signed four contract extensions with current members of their women’s roster: Lourdes Oyarbide and Alicia González, who will remain with the Blues next year, plus Sheyla Gutiérrez and Barbara Guarischi, who will stay until the end of 2023.

The squad managed by Sebastián Unzué thus secure big teamwork assets and intelligent racers with González and Oyarbide, two of the ‘founding members’ of the Blues’ women’s program back in 2018, while they will also enjoy the experience and individual quality of Guarischi -four podiums in 2021- and Gutiérrez -2nd at two stages in Valencia-.

Barbara Guarischi: “Thanks to the team for these past two years together and for the confidence they give to me for the upcoming two. I’m so happy to be part of this team, this group of people so kind, humane. Their human quality has been a huge factory in my choice to stay. I believe in the strength of people together being way more valuable than each other’s individual abilities, and that’s a value also shared by this team. We’re doing things really well this year – it’s obvious that things are easier, that your legs and mind suffer less, when you have such strong talents, but we have grown so much as a team, too. We’re a group of friends who go racing every week, people who are willing to sacrifice themselves for each other to achieve the best results, and that’s why I’m so thankful to the team for being able to stay and this confidence. Let’s keep moving forward!“

Lourdes Oyarbide: “I’m really happy to continue with this team for another year. This project is growing so fast, year after year, and I think I’m being able to follow those footsteps as an individual. That’s why I want to thank them for the preserved confidence in me after these four years.”

Alicia González: “I’m so happy to continue here for yet another season, what will be my fifth year with has already become my second family. Both the riders I’ve been sharing teams with since 2018, or even earlier at other squads, and the ones who have recently joined make this a wonderful place. We’ve created a solid team, with a great atmosphere that makes it easy to work and progress. Ever since this project start we’ve seen the team grow and evolve, both as a team and as individuals. We race with ever more ambition and well organised, and the results keep coming. If we follow that path, 2022 will be another great year for us.”

Sheyla Gutiérrez: “I’m super excited to have signed for an additional two years. They’ve always trusted my quality in this team, believed in my potential, let me grow. As they say when you get married, they’ve helped me in sickness and health. I’m hopeful that all these bumps on the road, from a physical standpoint, are finally gone. I feel really strong, full of ambition and looking forward to what’s to come. I feel like I should end this season on a high note, but I’m even more confident about the upcoming ones. I’m happy to continue growing in this project, which was somehow born into a conversation Eusebio and I had so many years ago – which ended up becoming a real thing, the team that now has all of us together here.”

Sebastián Unzué: “For us, these are four crucial riders to have on board, people who help us consolidate and reinforce what we consider the core of this project. Alicia and Lourdes have been here since this team was created, and they are becoming more important every single year. Their racecraft has evolved, their physical performance has increased and they’re extremely reliable. Wherever they go, they’re always ready to help our leaders, and having committed riders like them with us is a huge advantage.

“Barbara is one of the most experienced riders in the team, whose importance is also growing every season with her great support to the team leaders and her ability to contest races. Her top speed helps us support Emma better at sprints, and her talent for cobbled classics, flat roads, approaches to race finishes, keeping the position, stageraces – she’s got that natural talent that makes her fundamental to our success. It was a priority for us to retain her for the foreseeable future.

“On the other hand, Sheyla is a really important piece of this team, right now and for the future. The last two years don’t make justice to her quality and performance. As soon as she leaves her recent injuries and health issues behind, we’ll see her reaching her maximum potential. She’s got speed, winning instinct, is a huge asset in one-day races -supporting the team and hopefully contesting them in the future-. We’ve got confidence she’ll reach big heights really soon.

“I want to thank all four of them for the confidence and enthusiasm they’ve always shown towards this project. Working with such committed people is one of the reasons for any success we obtain here.”