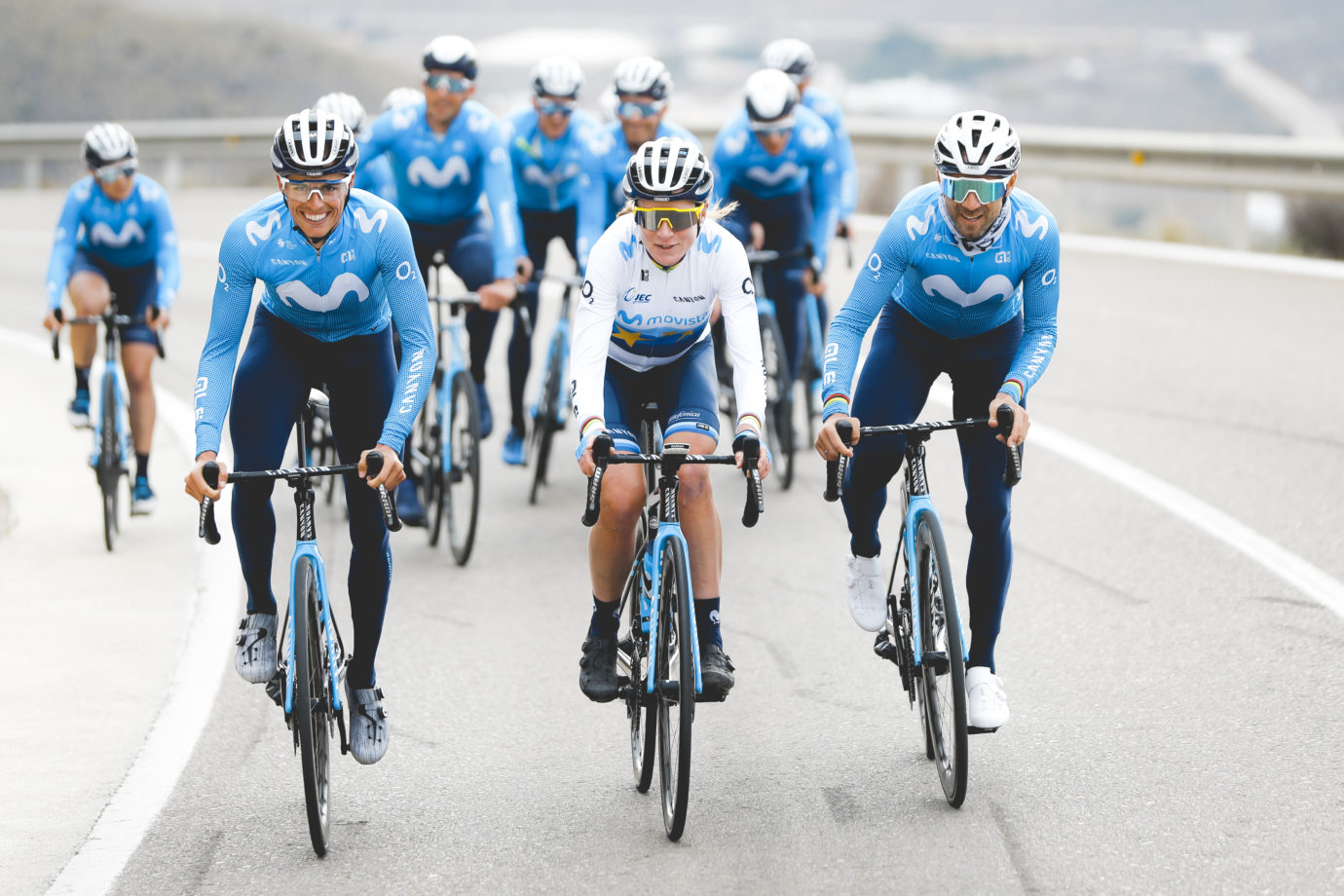 A season of growth and brilliance

Telefónica-backed squad back on the podium of a Grand Tour, reaches the sky with a sensational women's squad as Annemiek van Vleuten is all but certain to finish on top of the world rankings this Saturday.

After confirmation that, due to multiple injuries and setbacks, the women’s Movistar Team will not be able to compete in this weekend’s Dutch races in Drenthe, the Telefónica-backed squad can now put an official end to its 2021 season, the 42nd year of history of the Abarca Sports organisation in the top tier of cycling.

38 victories -the 15 wins claimed by the men’s outfit and the 23 triumphs notched up by the women’s roster- are the great overview of a 2021 season which, brought – just like every year – major challenges, yet also the good taste of success. Two years after last stepping onto the podium in Madrid, the Movistar Team got back to the La Vuelta podium in Santiago, as Enric Mas (2nd) further confirmed he’s one of the most consistent riders for three-week stageraces in the peloton.

Up to 13 riders raised their arms victorious with the Blue team, the two most winning riders coming from the women’s side. While Emma Norsgaard experienced a breakthrough season -with six victories, including a stage of the Giro Donne and the Danish ITT Championships-, fighting from the beginning -2nd at Het Nieuwsblad- to the end -6th in Paris-Roubaix- amongst the world’s best, Annemiek van Vleuten showed once again in 2021 why she’s considered the best in the business.

No less than 12 victories had the signature of the inimitable Dutch rider, including three stageraces (La Vuelta, Noruega, Setmana Valenciana); her second Ronde van Vlaanderen, 10 years later; and the Tokyo Olympics’ TT gold medal, the second claimed by a rider from Eusebio Unzué’s organisation after Miguel Indurain’s in Atlanta, 25 year ago (1996).

‘Miek’ will be crowned, barring any big surprise, as both the winner of the 2021 UCI Women’s WorldTour and the best rider in the UCI ranking this year on Saturday, bringing back to the Movistar Team a position -as leader of the world standings- they weren’t holding since 2018, when Alejandro Valverde -who was also back to success in 2021, with three victories- led the international ranking that season after another unforgettable win in Innsbruck.

As the 2021 season ends, the Movistar Team wishes to take advantage from this overview to remember the late Gary Baños. His work, together with that from so many people part of Abarca Sports -almost one hundred employees-, has helped the Blues, most notably its women’s team, experience so many beautiful moments over this year. His memory remains really close to everyone’s hearts in this team.