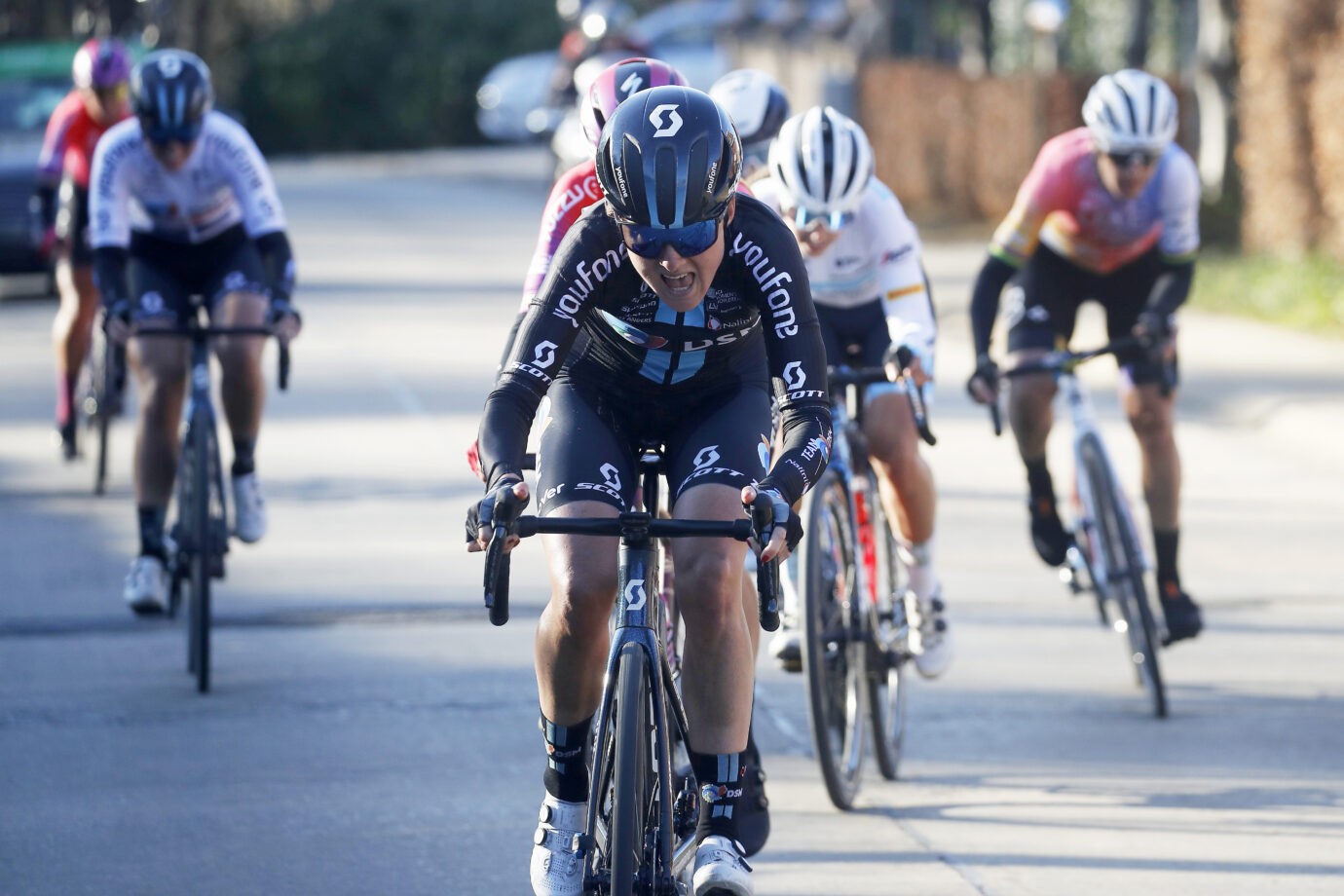 Mackaij is one of the strongest allrounders in the WWT. (c) Sprint Cycling Agency
Women's Team Market / Transfers

Dutchwoman, part of her national Wollongong Worlds squad next week, set to bring Blues her multi-talent quality starting next year.

Another big headline for the Movistar Team’s 2023 ‘mercato’ lands on Tuesday as the Giro, Tour-winning squad will rely from next year on the services of skilled allrounder Floortje Mackaij (Woerden, NED; 1995). She joins from Team DSM on a two-year contract, through the end of 2024.

Mackaij has already spent the better part of a decade as one of the most valuable allrounders in the WorldTour, with great punch, ability to excel at both the mountains and the flat, full of experience -nine years in the UCI peloton despite being just 26- and enormous consistency. In 2022, she’s got herself to the podium at Hageland and Drentse Acht (3rd at both), and finished near the top at races as different as Paris-Roubaix, the Tour de Suisse (6th at both) or the Itzulia (8th).

The quality of Mackaij is further underlined as she’s been called up for the stacked Dutch national team -led by her future team-mate Annemiek van Vleuten- in the World Championships’ road race in Wollongong, Australia next week.

Floortje Mackaij: “I am really looking forward to join the Movistar Team in 2023. I’ve got the feeling that I’m more than ready for a big change. After a decade with Team DSM, and its previous iterations, it’s time for something new. As a rider, I know I still can improve a lot, and want to focus more and more on the classics, hilly stage races and time trials. With the 2023 roster the Movistar Team will have, I know we can set our sights on a lot of amazing goals and hopefully become one of the best WorldTour teams, if not the best. Another fun fact for me about this new adventure will be staying teammates with Liane, which is so great! We know each other for more than six years now, so it feels great to join her to the ‘Blue squadra’. ¡Qué ganas de empezar la nueva temporada con el Movistar Team! (Literal words in Spanish from her: ‘I’m so excited to start the new season with the Movistar Team!’)”

Sebastián Unzué: “Floortje is a rider I feel we haven’t seen her maximum potential yet. She’s got extraordinary allrounding skills, while I also feel she’s got nice room for improvement. She’s one who has been near the front at tough classics, like Roubaix or Drenthe, while also showing this year, as we’ve seen in the WorldTour stageraces in Spain or the Tour of Scandinavia, that she can be up there in the mountains. She’s also an incredibly consistent rider, always keeping the same level, and one of our goals for the future is helping her winning races. When it comes to teamwork, she’s going to be an absolutely key asset when we go with Annemiek, or Emma / Arlenis at other moments of the season, to the big races. One of her strongest values is her racecraft and ability to read how things are going to pan out — she’s like a sports director on the bike, which is crucial for us. Despite being still young, she’s got strong experience, having raced in the WWT peloton since age 18.

“Floortje’s always been part of the same organisation, which speaks loads about her character and lotalty, and coming here will surely be a positive chance for her, which can help her grow a step further. She’s got an open personality, she’s proactive and tries to make things easier for everyone. It’s the same as with Liane, whom she will share this adventure with next year. We will do our best for her to feel comfortable here. Annemiek knows her perfectly and believes, just like we do, that there’s more in her, that she can progress, evolve. And racing with her will allow her taking huge experience out of it.”