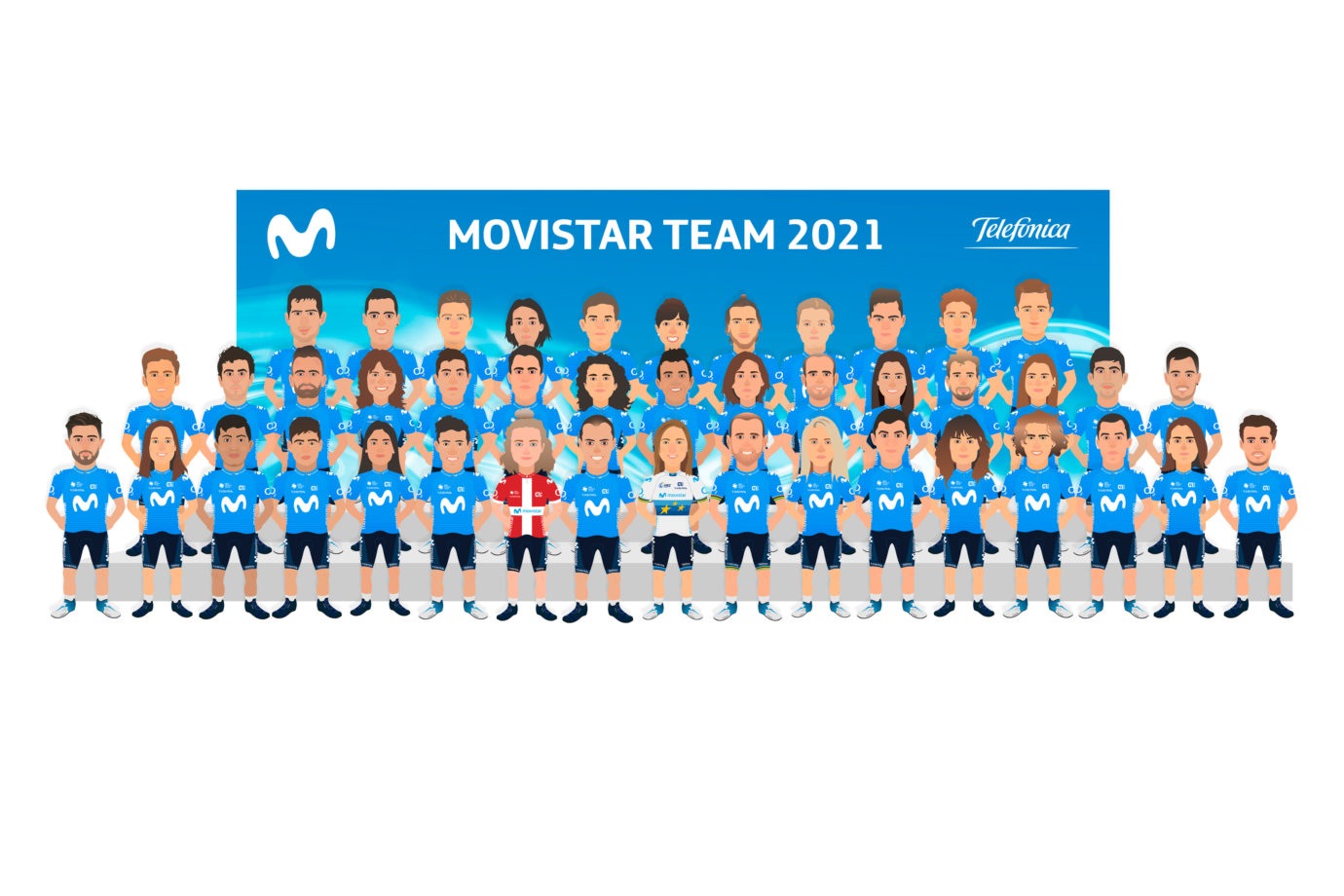 Bearing clear resemblance to the situation the world is suffering from since early 2020 due to the health crisis, the Movistar Team will seek to bounce back in 2021, trying to take advantage from the strong foundation they started to lay last year in order to keep its flag high. At their eleventh season under Telefónica’s title sponsorship, the 42nd since Reynolds opened the trajectory of this illustrious Navarra-based outfit, the organisation managed by Eusebio Unzué tackles the most diverse challenges in its history, aiming at goals that seemed far from their reach until not long ago.

Two of Abarca Sports’ new faces are the proof of the profound transformations the team is going through. Spaniard Iván García Cortina, one of the men’s squad’s five signings, hopes to bring the Movistar Team to the top of the Northern Classics in the near future. He’ll enjoy support from an ever stronger roster, together with Johan Jacobs -who already shone brightly in 2020- and helped out by veterans like Imanol Erviti and up-and-coming talents, such as Juri Hollmann, Mathias Norsgaard, Gabriel Cullaigh or the ever-dependable Matteo Jorgenson, who did really well in his neo-pro season.

The Blues’ biggest news in the transfer window were, however, the women’s Movistar Team’s strongest addition in its four years of existence. Annemiek van Vleuten has all the experience, quality and commitment needed to score victories and help the youngsters shine into a powerful, international lineup. Spanish talent Sara Martín; Danish sprinter and time trialist Emma Norsgaard; and the spectacular American all-rounding abilities of Leah Thomas complete the list of signings of a squad otherwise intact, with a deep bench: 14 riders, managed by Sebastián Unzué and led on the road by Pablo Lastras and Jorge Sanz.

López, another great reference for the Grand Tours

Miguel Ángel López‘s arrival marks, in turn, the strongest reinforcement at the men’s outfit, a group which continues to bolster its stagerace profile with another allrounder in as Austrian Gregor Mühlberger also joins. Two young talents, Madrilian Gonzalo Serrano and Puerto Rico’s Abner González, complete the signings of a Blue squad which goes up to 29 names, 43 in total for the amplest group ever for Abarca.

The Movistar Team will continue in 2021 with its efforts to make cycling more sustainable, following a plan that also includes several projects to take cycling closer to fans and help the sport remain with those in need. Improving on a very challenging 2020 for everybody will be the main goal for a squad that will enjoy support from the same sponsors, three dozen brands, which already featured their names in the team’s vehicles before the pandemic broke out. A sign of the stability and respect enjoyed by a legendary project in cycling.