A powerhouse with lots to show yet

POWERFUL TALENT. At 2m02, Mathias Norsgaard is the tallest rider of the 200+ athletes who have been part of the Abarca Sports organisation in more than 40 years, as well as only the second name from his country to don the Telefónica-backed squad’s jersey -the first one being Gert Frank, in 1980-. A time trialist and a pure rouleur, following the Danish canons, he took the bronze medal in the 2018 U23 ITT World Championships -also finishing 4th in Yorkshire (2019)-, and also showed his excellent power with a long, successful break on stage one of the 2019 Tour de l’Avenir, ahead of the biggest world talents. Another crucial addition to the ‘Blue train’ for 2020.

CYCLING AS A FAMILY. His is one of very few cases when a brother and a sister have been able to make it up to the same WorldTour outfit: Mathias, and Emma Norsgaard, a decent sprinter and strong woman for flat courses, who is riding for the Movistar Team as of 2021. Emma’s partner is, coincidentally, a world-class athlete and a good friend of Mathias: Mikkel Bjerg, a three-time U23 ITT world champion, who usually trains with Norsgaard as the three spend the cycling season in Girona or in the Andorra mountains nearby.

DAMNED LEG. It took Mathias eight months to recover from a horrible injury caused by a road incident in Cassà de la Selva, Girona, back in December 2019. His Movistar Team-mates had to wait until early August to see the Dane pinning a number on his back. And it was a short span in the peloton for Mathias, because, barely sixth days after his debut, pain to his leg, knee and ankle advised him to take new exams in Denmark… and find out his tibia wasn’t fully healed from the fractures which made him suffer so much in the winter. He had to undergo some more surgery, change the crews and nails added to his bone, repair a cut to his toes’ tendons… and fortunately, he was back to training in the winter. 2021 will surely be better for him!

He’s got his own podcast, in Danish, alongside former Lotto Soudal rider Rasmus Byriel, called Gruppetoen. 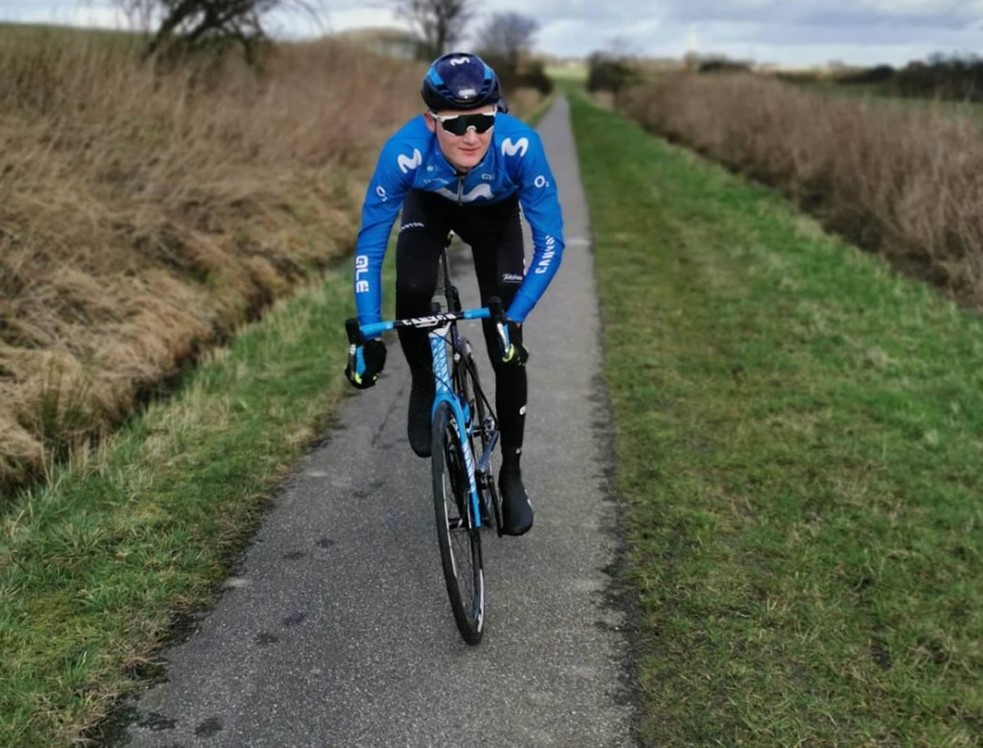 Training on his home Danish roads.

Training on his home Danish roads.