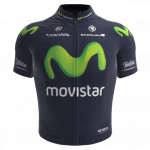 The Movistar Team becomes the UCI WorldTour’s winner for the third time on a row thanks to, among many exploits, Quintana-Valverde’s double Tour de France podium, combined with impressive colective performances rewarded with podiums in both Madrid and the Champs-Élysees. Andrey Amador shines in the Giro (4th), where Visconti claims the KOM jersey; Nairo steals the show at Tirreno-Adriatico; Malori comes unbelievably close to gold in the Worlds ITT, after five victories; and Alejandro, immense once again, wins Flèche and Liège for the third time and brings himself to the fore all the way from January to October. Marc Soler shows results for Spanish cycling are secured for the future as he wins the Tour de l’Avenir, while Alex Dowsett crowns a Spanish effort from international sponsors to set the new UCI Hour Record, 21 years after Miguel Indurain.