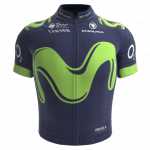 A season full of contrasts. The best year one could think of in the first half of 2017 turned into a nightmare in the second half, after Alejandro Valverde suffered a near-ending crash on stage one of the Tour, July 1st, in Düsseldorf. Before that, the dream lasted for four months with nearly thirty victories: the best Valverde ever (11 wins until April, including Flèche, Liège, País Vasco and Catalunya); and two stage wins, the team GC and a 2nd place overall in the Giro with Quintana, just 31″ short for a second title. In the end, ‘only’ 31 victories, with a significant step forward by youngsters Soler, Carapaz and Pedrero to make up for an otherwise somber end to the season.

A YEAR OF CONTRASTS