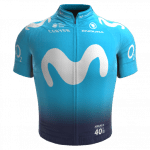 The celebrations of the 40th anniversary of the team mark the transit towards new horizons. Another Grand Tour is added to the palmarès, the Giro d’Italia, as a La Vuelta GC podium is covered in rainbow colours with everlasting Alejandro Valverde. On the other hand, the Blues bid farewell to two stories of growth and success: the one of Nairo Quintana, who was nearly everything for Latin American cycling, and Richard Carapaz, the ‘conqueror’ of Italy in May. The Movistar Team looks towards its fifth decade of history with the calmness and experience of an organisation which has sailed through thick and thin in this sport.

A journey towards a new era